There’s certainly no silver bullet to solving the epidemic of traffic violence. In fact, by definition, Vision Zero is a multi-pronged approach to the complex problem of street safety.

But one thing is crystal clear: Speed kills.

We know that speed is a common factor in traffic fatalities and severe injuries — especially for people biking or walking. According to the National Highway Traffic Safety Administration, speed-related crashes are responsible for an estimated $52 billion in economic losses each year nationwide. And one of the key lessons learned from the early adopters of Vision Zero in Europe is that speed reduction must be a top priority if we are serious about the goal of eliminating traffic fatalities and severe injuries.

With limited police resources, Vision Zero proponents are exploring Automated Speed Enforcement as a means to increase capacity to control deadly speeding. And a new report from the San Francisco Controller’s Office includes a wealth of real-world examples of success with safety cameras that help manage speed.

Why invest in such technology? As Walk San Francisco recently explained in a compelling newspaper editorial, a person walking hit by a car at 20 miles per hour has an 80% chance of surviving; at 40 miles per hour, that person has only a 10% chance of surviving. In addition, a driver traveling at 20 mph can stop in three car lengths; a driver traveling at 40 mph takes as much as nine car lengths to stop. 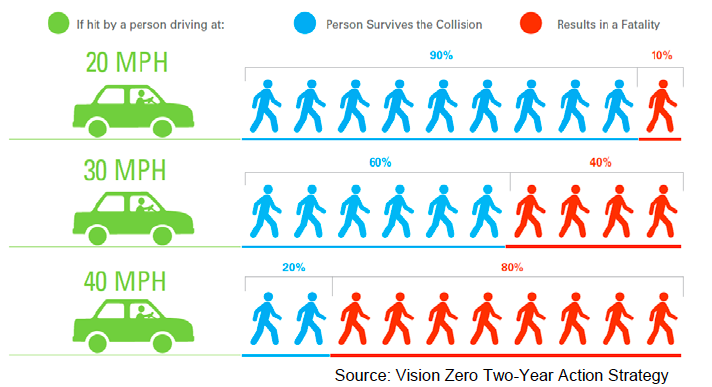 In a report released last month, the SF Controller’s Office highlighted the efficacy of Automated Speed Enforcement (ASE), noting that “ASE has been found to be an effective tool that over 130 communities throughout the country have implemented to improve safety for all road users.” That stat comes from the Insurance Institute for Highway Safety and Highway Loss Data Institute, which maintains a map and table of where safety camera are used and strongly supports their use.

More specifically, though, the SF report showcased the results of a six-city survey that showed significant results for safety cameras.

Chicago reported a 31% decline in speeding vehicles [after the implementation of ASE].

Washington D.C. had a reduction in drivers speeding more than 10 mph over the speed limit from 1 in 3 to 1 in 40 — and reported a 70% reduction in fatalities.

New York City saw a 13.4% decline in crashes with injuries that were within approximately 500 feet of installed cameras.

Portland, OR, reported a 53% reduction in fatalities since program inception.

In Chicago, within the first year of ASE, the number of speeding events recorded by each camera reduced by an average of 43%.

Since Seattle’s fixed camera program inception in December 2012 to December 2014, the average number of traffic violations decreased by 64%.

In Washington D.C. there was typically a 60% to 80% reduction in violators within four to six months of camera deployment.

In Seattle, 90% of offenders have not received another citation.

Of course, this isn’t the first report to showcase the merits of safety cameras. Earlier this year, the Insurance Institute for Highway Safety released a study that found similar stats in Montgomery County, Maryland.

Cameras have reduced by 59% the likelihood of a driver exceeding the speed limit by more than 10 mph, compared with similar roads in two nearby Virginia counties without cameras.

The camera program reduced the likelihood of fatal or incapacitating injuries by 39% on residential roads with speed limits of 25 to 35 miles per hour; and 19% overall.

In addition, 95% of drivers surveyed were aware of the cameras; 75% said they had reduced their speed because of the program, and 59% had received a speed-camera ticket personally.

That’s not to say that safety cameras are a silver bullet either. The report explores in detail the common challenges in winning public and political support, as well as the considerations in assessing success and maintaining data on violators. But, as technology like Automated Speed Enforcement is getting deservedly more attention in a growing number of American communities, it’s clear this tool is a proven and much-needed asset in addressing the deadly consequences of excessive speed.

Read much more in the full report from the SF Controller’s Office here.

PREVIOUS STORYNEXT STORY
Boston & Beyond: Statewide Coalition Launches in MassachusettsBuilding on the Rapid Growth of Vision Zero in 2015