Last week, we were excited to join hundreds of Vision Zero leaders in New York City for the second annual Vision Zero Cities conference, hosted by Transportation Alternatives and Families for Safe Streets. It was a whirlwind two days full of inspiring presentations, a-ha moments, deepening discussions and sharing of successes from communities nationwide. It was difficult to distill, but we’ve identified 11 of the top take-aways from the jam-packed event.

In just its second year, the event itself was a strong affirmation of the momentum of the Vision Zero movement, with more than 300 participants from communities nationwide. From Honolulu to St Paul, from Seattle to Fort Lauderdale, the representation at the conference was impressive, highlighting not only the number of cities that have committed but the widespread interest in communities of all types. And the participants themselves didn’t just represent one sector. There were high-ranking folks from all the key city stakeholder groups: police, transportation, public health, and the mayor’s office — in addition to a wealth of passionate advocates.

Zero is the right number.

At the very start of the conference, Paul Steely White, executive director of Transportation Alternatives, set the tone. Now that Vision Zero has gained prominence, he stressed, we can’t compromise the principles or allow the goal — as difficult as it is — to be watered down. “Let’s defend Vision Zero from devolving into a slogan,” Steely White said. “Let’s defend Vision Zero as a life-saving vaccine, equitably applied in New York City and your city, too.” Living up to that commitment, Transportation Alternatives took action later that very day. When keynote speaker Bill Bratton, New York City Police Commissioner, told the conference attendees that Vision Zero was a laudable goal but couldn’t be achieved, the organization didn’t let it slide. They released a strong statement defending the initiative — and a few few hours later the Mayor reiterated zero deaths as the right goal.

We get what we build for.

Janette Sadik-Khan, the visionary former NYC Transportation Commissioner, also gave a rousing address that called out another central tenet of Vision Zero: “We get what we build for.” As Sadik-Khan so eloquently showed, “deadly street design is the result of deliberate choices” — and by designing our streets differently we can engineer out those fatal tendencies. “Through analysis and leadership, traffic crashes can be predicted and prevented,” she said. Change won’t come easily, though. “When you challenge the status quo, the status quo gets very grumpy and pushes back,” she cautioned. But the payoff is more than worth it: “When you change the streets, you change the world.” Want more? Get her new book, “Street Fight: Handbook for an Urban Revolution”

When tens of thousands of people die from a disease, it’s considered an epidemic. Public resources are marshalled to intervene and protect the population with medicine, vaccines and public health policies. And in the case of many illnesses — like cholera — we’ve successfully eliminated the threat. What if that type of mindset were applied to the 33,000+ people who die or are seriously injured on our roads each year? How to communicate traffic violence as a public health issue, and how to work with diverse sector leaders — from public health to trauma surgeons — was a central discussion throughout the conference. Stay tuned for a case study on this topic in coming weeks from the Vision Zero Network. 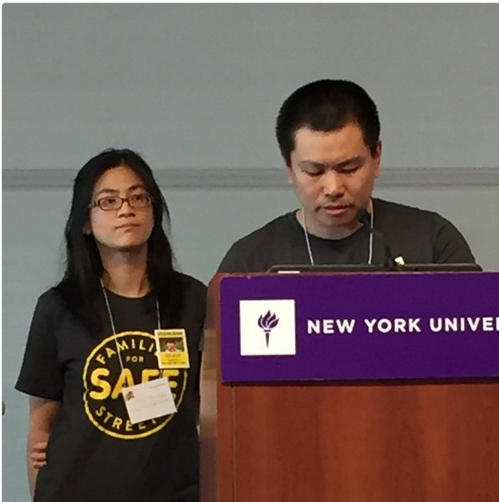 “Statistics are human beings with the tears wiped off” – Amy Tan Liao. In 2013, Amy Tan Liao and Hsi-Pei Liao lost their 3-year-old daughter, Allison, in a traffic crash — and, despite the unspeakable pain of loss, they didn’t let her become a statistic. During a moving presentation, the Liaos described the critical importance of sharing the human stories from traffic crashes to galvanize action around Vision Zero. By putting a face on the the numbers, the Liaos and other members of Families for Safe Streets are successfully moving policymakers to take action, like lowering the speed limit in NYC (a feat that typically would take years). Adam Mansky, TA’s board chair, commended Families for Safe Streets for turning traffic safety from “tabloid fodder to an absolutely imperative.” And the media has taken note, too. As Jake Dobkin, publisher of Gothamist attested, those human stories grip editors as much as they do readers, and help catalyze press coverage, as well.

Reducing speed is critical — and possible.

The imperative to reduce speeds has taken root in many cities. As Families for Safe Streets so poignantly pointed out in one session, by reducing the speed limit from 30 to 25 miles per hour in NYC (and thus slowing the force at which a car strikes a person), they doubled the chance of someone surviving a crash. The trouble is how do we ensure drivers follow the law? That’s where automated speed cameras (or, better, automated “safety” cameras) come in, which have proven to dramatically reduce the incidence of speeding. Many cities still face challenges in implementing cameras because of the need for state legislation or skepticism from the public as to the use of the resulting funds, but those barriers are being overcome. In Seattle, for instance, the money from camera fines is directed to safety improvements in school zones, and a new campaign from Families for Safe Streets is pushing the state legislature to expand NYC’s automated enforcement by focusing on the state’s most vulnerable road users: school children.

Implementation and enforcement must be equitable.

Thanks to the leadership of advocates and public officials, equity has become an essential aspect of the discourse around Vision Zero. Leah Treat, Director of the Portland Bureau of Transportation, outlined how her city has integrated equity, not only as an aspiration, but as an integral part of the initiatives guiding principles. In practice, that’s meant intentional thinking around issues like enforcement. For instance, while many of the fatalities occur disproportionately in low-income and communities of color, increased automated speed enforcement in those areas won’t be driven by punitive fines — that may undermine community trust with police and financially burden already struggling households — but rather focus on education at the outset to ensure awareness and buy-in from the neighborhood residents.

Violence is violence, no matter the weapon.

In an impassioned speech, City Councilmember Ydanis Rodriguez (pictured below), the chair of the NYC Committee on Transportation, emphasized that traffic violence is no different than other forms of violence — and that we must address it with the same level of outrage and urgency. But we can’t put the onus equally on all road users. While people who bike, walk and take transit must be vigilant, it is drivers who hold the most culpability, given the lethal damage that can be inflicted by a car. In a later session, representatives of the NYC Department of Transportation shared their current, high-profile campaigns that are graphic but honest in attempting to drive home to motorists that their decisions can be a matter of life or death for their fellow New Yorkers. (Photo below of Ydanis Rodriguez by Seattle Greenways) 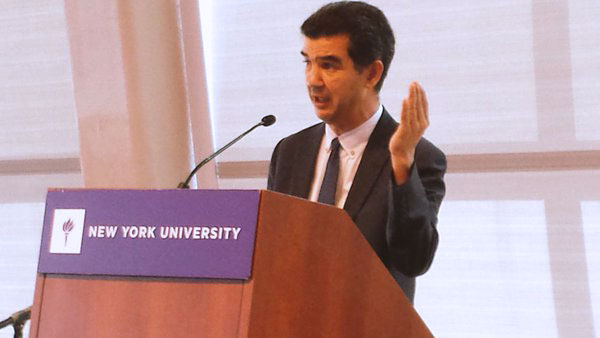 “We’re drowning in data and starving in wisdom.” That’s how one panelist put it in a packed session on the use of data to drive decisions. The need and use of data may seem straightforward, but Vision Zero has revealed the nuanced nature of using numbers effectively to drive change. It’s not only gathering information but gathering the right information. It’s not just collecting data but sharing and comparing and analyzing that data in relation to and in context with other agencies and departments. And it’s not just an internal effort — the public holds knowledge, as well, and being fully transparent with the use of data is critical to buy-in. For instance, Elena Conte from the Pratt Center for Community Development emphasized that in neighborhoods like the South Bronx, data maps show where crashes occur and what interventions are being planned but haven’t made clear to the community what data is prioritized and how those projects get on the to-do list. Data isn’t a one-way street, but it’s absolutely critical to getting to a new destination.

It’s not just about individual drivers.

Perhaps one of the most surprising examples of success came from a vital but often-overlooked stakeholder in Vision Zero efforts: the Taxi and Limousine Commission. As Commissioner of the NYC TLC, Meera Joshi is charged with licensing and regulation of more than 50,000 vehicles and approximately 100,000 drivers — and she’s made significant changes over the past three years in the name of Vision Zero. Education has expanded to all for-hire drivers (not just taxis), summonses for safety infractions have risen dramatically (doubling and tripling in some cases) and the TLC is using the carrot and the stick, rewarding good behavior with new recognition of drivers with clean records. Needless to say, we were impressed and will be sharing more from the TLC soon!

We must ensure that everyone has a voice.

Often times the people with the most first-hand knowledge are the least likely to be at the decision-making table. In a session on equity, Do Lee of the Biking Public Project highlighted the fact that NYC’s commercial and delivery cyclists have an intimate understanding of the streets they ride on up to 10 hours per day, but their voices are rarely heard in discussions about traffic safety. As Marco Connor, Legislative and Legal Manager for Transportation Alternatives, emphasized, because of historic inequities in police enforcement and resource allocation, we can’t meet the goal of Vision Zero without addressing those inequities. But simply foisting changes on communities that have been (intentionally or unintentionally) left out of the top-down planning process or seen their visions accepted in concept but undermined in practice, will be challenging without shifting the community engagement paradigm. Thanks again to Transportation Alternatives — and all the participants and presenters – for such an inspiring event. Read more from some of the presenters discussing these critical topics and more in the first edition of “Vision Zero Cities: International Journal of Traffic Safety Innovation.“

PREVIOUS STORYNEXT STORY
How does Vision Zero differ from the traditional approach to traffic safety?How can we engage taxi and for-hire drivers in Vision Zero?