I was honored to attend and speak at the International Vision Zero Conference last week, where I joined with 200 people from 33 countries to learn about positive trends occurring for the movement in cities across the world. While all eyes may have been on Sweden in the conference room where we met for two days last week, I was relieved to see that the Swedes’ eyes were on something else. 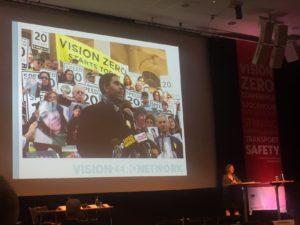 Many of us traveled from as far as Nairobi, Malaysia, India, Israel, Mexico, and the U.S. to participate in the conference, held in Stockholm, to better understand how Sweden had succeeded in reducing by half the number of traffic deaths in the past two decades, even as car trips grew. And while its transportation system is revered as one of the safest on the planet, with fewer than 3 traffic deaths per 100,000 compared to the U.S. at more than 11, Sweden is not letting up on its efforts. Instead, the national Swedish government, which hosted the conference, used the occasion to officially renew its Vision Zero efforts with enhanced gusto and new focus areas.

Zero is the right goal

As the Swedes launched Vision Zero 2.0 last week, 20 years after creating the transformational concept, their approach seemed refreshingly reflective, candid, and humble as they looked back on their successes and failures. They focused on applying lessons from the past and showed renewed energy, curiosity, and openness to new ideas for their path forward. 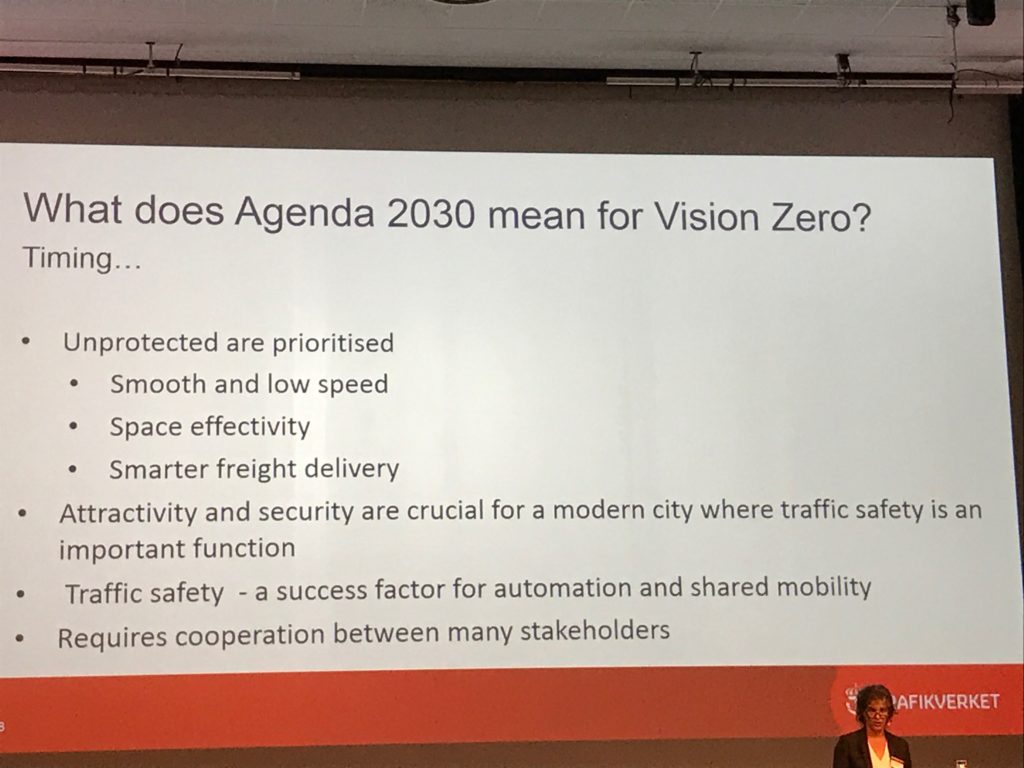 They clearly reaffirmed their commitment to zero being the only ethical goal when it comes to safe mobility, while acknowledging that they must continue to adjust their strategies as they assess what is most effective. It was encouraging to see these international leaders openly recognize that they had not gotten everything right along their Vision Zero journey so far, nor could they expect to be perfect in the future. Yet they committed to continue to measure their efforts, adjust accordingly, and stay focused on the goal of safety for all. Specifically, their renewed efforts will focus more on cities; on ensuring safe walking and bicycling trips; on reducing speeding and impaired driving; and encouraging safety-focused tech innovations.

Vision Zero is not a number, it is a philosophy

If anyone showed up at the conference expecting to get a playbook on Vision Zero strategy or a technical how-to guide, they would have been disappointed. And hopefully, they’d also have learned a key lesson.

“Vision Zero is not a number, it is a philosophy,” as Rohit Baluja, of the Institute of Road Traffic Education of India succinctly shared.

This important point was stressed throughout the conference and is one that our U.S. Vision Zero leaders will be wise to understand.

Vision Zero is not only the goal of zero traffic deaths and severe injuries, nor is it a one-size-fits all approach. Instead, it is a Safe Systems framework to be applied to the many decisions, plans, and policies that relate to the transportation system. (To read more about the Safe Systems approach, which is the fundamental basis of Vision Zero, see this well-written account by the Organisation for Economic Co-operation and Development (OECD).

Representatives from less-developed and non-European nations underscored this point with examples of consultants or influential international organizations attempting to use a cut-and-paste set of strategies in places like Asia or India, not recognizing and incorporating the different challenges these countries face. But far from rejecting Vision Zero, these passionate traffic safety leaders urged greater understanding of and adherence to the Safe Systems approach, to be applied within the context of each individual country.

We are certainly experiencing this in U.S. Vision Zero efforts, as we know that we cannot use a cookie-cutter approach in importing this concept from one country to our own, with such different histories, cultures, and laws. This realization is both opening up opportunities for us that some other countries envy, while also presenting challenges not yet surfacing in other countries.

One major example of a challenge that many attendees were interested to learn more about is the U.S. experience with equity in Vision Zero, particularly racial and income-related equity. Our European counterparts were eager to hear about experiences in U.S. cities as we strive to prioritize solutions in communities of color and low-income communities disproportionately impacted by traffic injuries and deaths, and the related concern that Vision Zero can provoke over-policing in those same communities, increasing chances of racial profiling and conflict with police. While these issues have not been considered as top priorities in places like Sweden, there is clearly growing interest and awareness of the unintended risks Vision Zero can bring related to equity. (To read more about the topic of centering equity in Vision Zero work, see our report here.)

It was clear at the conference that the Safe Systems approach must integrate a focus on designing (or re-designing) streets for the behavior we want to encourage, especially safe speeds. This means that Vision Zero explicitly calls for elevating the “E” of Engineering above those of Education and Enforcement. While those latter concentrations certainly have a role to play, it’s clear that we cannot educate or enforce our way out of today’s traffic safety problems; far more emphasis needs to be placed on setting up the physical environments that are proven to encourage safe behavior.

Prioritizing Safety over Speed is Critical for Success

It was encouraging to see so many nations engaging in or considering adopting Vision Zero, particularly some outside of Europe and some not as wealthy and developed.

I was, personally, most inspired by Mexico City’s early but promising success since launching Vision Zero a year and a half ago. 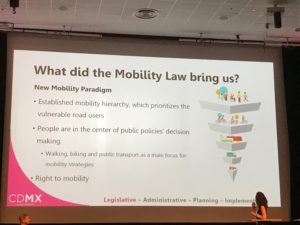 Mexico City is one of the densest and most auto-centric cities in the world, with a population of nearly 9 million people, 5.5 million cars and 23 million daily trips. As Laura Ballesteros, Undersecretary for the Ministry of Mobility (formerly the Ministry of Transport & Roads), readily admitted, Mexico City today is largely a place designed for cars rather than for people. But Ballesteros and her boss, Mayor Miguel Ángel Mancera Espinosa, envision a different future. They are advancing laws and setting new policies that create a new paradigm on the streets, prioritizing people over cars. As Ballesteros stresses, these plans and policies are not “just romantic” – an experience many of us are all too familiar with as big visions sit on shelves –  Mexico City’s leaders are beginning to implement the visions by transforming streets and allocating budgets to be safety first.

The greatest benefits in Mexico City are being realized by lowering speed limits throughout the city: including a reduction from 90kph to 70kph on highways; 60kph to 50kph on primary, or arterial, roads; 50kph to 40kph on secondary, or neighborhood, roads; and the establishment of new 30kph “calm zones” where there is the greatest density of people walking; and 20kph school-area zones. The changes were not popular at first, not surprisingly, but the numbers of lives saved cannot be disputed.

Since the speed limits were changed a year and a half ago, Mexico City has experienced 18% fewer traffic deaths. 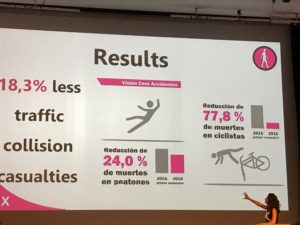 Mexico City’s goal is to reduce traffic deaths by 35% by 2018 and by 50% by 2021. While the speed limit changes did cause political pushback, they were essential to saving lives, Ballesteros says, citing data showing speed as the top factor involved in all traffic deaths in Mexico City (33%).

It is this kind of strong leadership, political courage, and data-driven decision making that is helping prove the case of Vision Zero in increasingly diverse countries around the world.

Inspiration to Continue Growing the Movement

“Road safety is a human right,” Jean Todt, UN Secretary General’s Special Envoy for Road Safety, declared at the conference, in a common refrain about the importance of a global approach to the crisis of road safety, which is claiming 1.25 people’s lives each year.

It’s encouraging to see influential international organizations place more emphasis on the need for political leadership and courage, evidence-based interventions, and a general Safe Systems approach. A great example is the new Save Lives report from the World Health Organization, a road safety technical package.

At the same time, much of the buzz at the international Vision Zero conference in Sweden was about the value of a grassroots approach, including local-level engagement and trying quick-turnaround pilot projects. In fact, it was rewarding that so many traffic safety leaders around the world are lauding the U.S. grassroots-driven Vision Zero efforts from L.A. to Fort Lauderdale to NYC. There was clear recognition of the power of leadership and urgency at the local level to make life-saving changes in people’s lives.

Another common refrain from the conference is that Vision Zero is, rightly, focused more on the political and social change needed than technical solutions. In the U.S., we should feel proud of our strong and early grasp of this truth.

In the end, it was clear that participants from dozens of diverse countries were not only looking to Sweden for Vision Zero answers, but also for providing the inspiration to ask tough questions and re-evaluate answers, given each country’s context.

Personally, I was particularly pleased to see that Sweden was not satisfied with their 50% reduction in traffic deaths, but rather was inspiring us all on how to redouble our efforts to keep moving toward the only acceptable goal in our efforts: zero.