Along with troubling racial disparities evident in law enforcement, including traffic stops, many are increasingly recognizing the economic inequities that are often a collateral consequence of traditional traffic safety efforts. It’s clear that the criminal justice system and related financial penalties associated with traffic citations disproportionately harm people of color and people living on low incomes. Recognizing the role that we and other traffic safety advocates play in this area, the Vision Zero Network is committed to understand the many systemic injustices long-baked into systems, and to work for change to prevent over-policing, racial bias and regressive financial harms “in the name of traffic safety.”

We are fortunate to be working with the Fines and Fees Justice Center (FFJC) to learn more and to help shape alternatives to today’s regressive fine system. In mid-May, we hosted a webinar focused on “Addressing Unjust Financial Penalties in Traffic Safety”, featuring Priya Sarathy Jones, FFJC National Policy and Campaigns Director. Sarathy Jones is also participating in a 20-city Vision Zero peer exchange that the Network is facilitating to help interested communities re-imagine the role of enforcement in traffic safety.

As FFJC explains, fines and fees have devastated the lives of millions of people in this country, trapping them in cycles of poverty and punishment. And these harms disproportionately affect people of color and people living on low incomes.

As advocates for safe, equitable mobility for all, Vision Zero champions need to be part of the solution, not part of the problematic status quo when it comes to ensuring equity in traffic safety work. Check out FFJC’s Roadmap to Equitable Fine and Fee Reform. While, admittedly, there are not yet strong models for how to make effective reform specifically in the world of traffic safety, we are eager to identify and support change in this important area.

What are Fines & Fees?

First, let’s define some key terms and understand the difference:

When budgets are strained, local and state governments often rely on revenue that’s generated from fees. According to Sarathy Jones, the average city earns 1.4% of its revenue from fines and fees. While that may not seem like a lot at first, it can mean a lot, especially to a cash-strapped city or state. And, many places lean on fees for far more of their budgets (see below). This can create a perverse incentive to accumulate revenue in a regressive way, in which that revenue is not distributed directly towards public safety initiatives.

In California, for example, the fine for running a red light is $100, but the cost balloons to $490 when various fees are added (see below). This is not uncommon around the nation.

The Investigation of the Ferguson Police Department, conducted in response to the police shooting of Michael Brown in 2014, shows the racially discriminatory practices by the Ferguson, Missouri Police Department and exposes the issues within the U.S. fines and fees system. Rather than focusing on public safety needs, Ferguson relied on law enforcement practices and capitalized off of the criminal justice system to increase revenue. And, they are not alone in the nation. The report found that the amount of Ferguson’s municipal budget funded by fines and fees increased from 13% in 2012 to 23% in 2015, in the city’s attempt to raise revenue.

According to FFJC: “From 2012-14, 85% of people stopped, 90% of those who received a citation, and 93% of those arrested were black, whereas only 67% of Ferguson’s population is black. Black drivers were also twice as likely as whites to be searched during vehicle stops.” Meanwhile, “Between 2010 and 2014, the City of Ferguson issued 90,000 citations and summonses. Just 21,000 individuals call Ferguson home.” This investigation highlighted the need to reform U.S. fines and fees.  Read the full DOJ Ferguson report here. 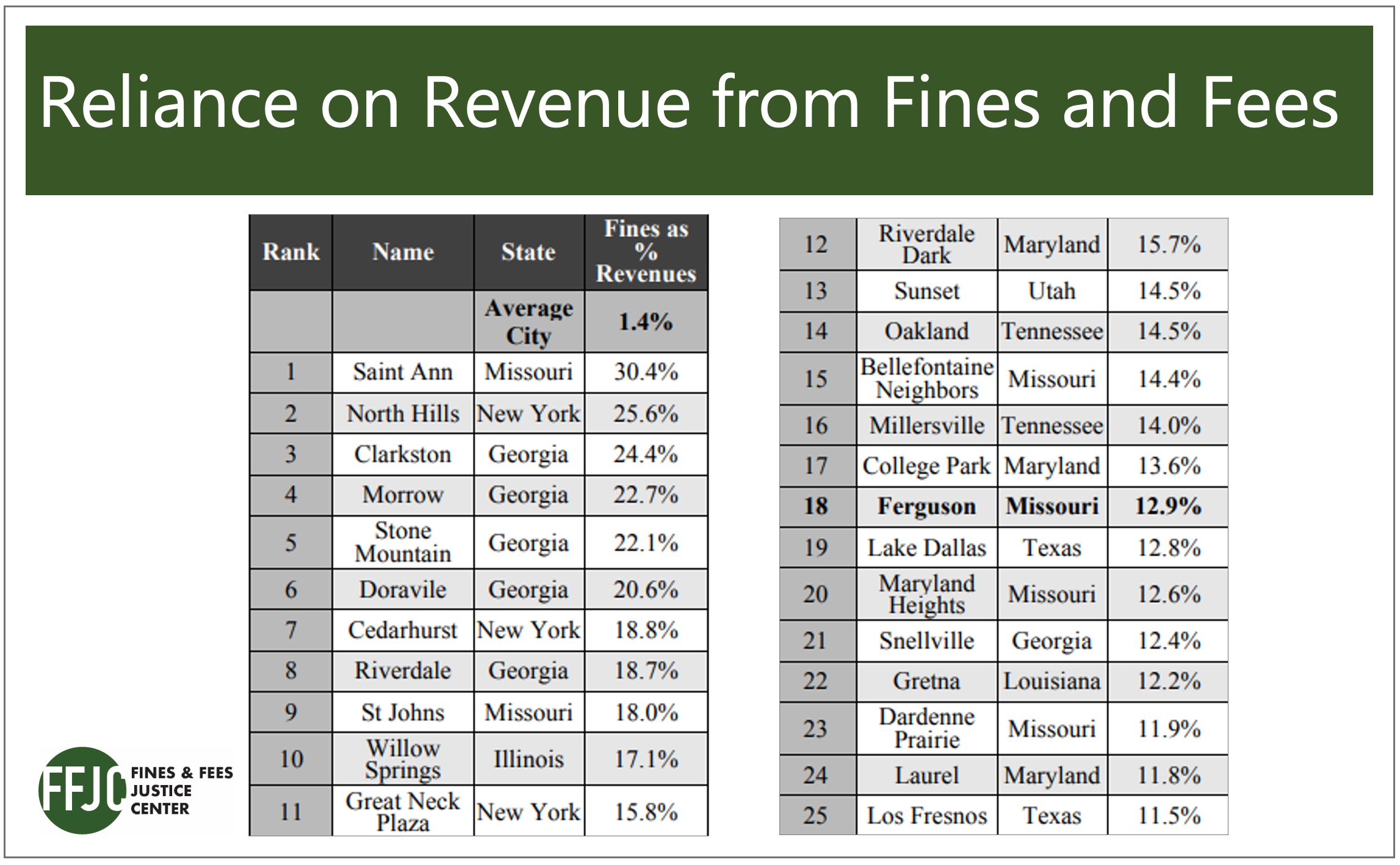 Ultimately, the collateral consequences of fines and fees are dependent on financial standing, and this means that people of lower incomes are disproportionately burdened by the costs. This affects them not only in a direct financial way, but also in many more insidious related manners.

For example, if a wealthy person were fined $300, it would likely be a minor inconvenience that barely affects them financially. Yet, that same cost for a person of a lower-income can easily escalate into dire consequences due to their inability to pay. It can result in a person being unable to pay their month’s rent, losing a place to live; or losing their vehicle, meaning they can’t get to work in a timely manner and lose their job, and having difficulty qualifying for future jobs, etc. As monetary sanctions are often inconsistent with the severity of a case, the resulting impacts are conditional to the wealth of the person, as cited in FFJC’s report.

Much evidence shows that today’s financial justice system creates a major barrier to people reentering society after a conviction and works against rehabilitation, according to this informative 2019 report by the Brennan Center for Justice. For some, court debt can easily lead to incarceration or license suspension, making it harder to find a job or housing or to pay child support. (Note: This is why Vision Zero Network supports the Driving for Opportunity Act in the U.S. Senate to create incentives to stop debt-based driver’s license suspensions.)

How Should Financial Penalties Be Addressed on State and Local Levels?

As we work towards Vision Zero and ensuring public safety on roads, sidewalks and bikeways through improved street designs, policies, and safety technologies, the intention is not — or, should not be — to increase enforcement. In addition to problems of racial bias and inequities, there is less evidence of efficacy than many think (more here), and enforcement largely rests on a reactive, punitive approach. Instead, we should promote a proactive Safe Systems approach of designing roads to be self-enforcing and implementing policies that emphasize safety over speed from the outset.

Nor do we want to be part of programs that emphasize regressive financial costs, especially as this disproportionately harms low-income communities and BIPOC communities. Vision Zero advocates should lead with the need to re-design streets, lower speed limits, and leverage policies and technologies to increase safety — not enforcement methods. (More on how we can get to Zero nationally)

We are seeing new and proactive approaches to change the regressive financial penalties associated with traffic citations. In addition to examples like the SF Financial Justice Project (see main blog post), some communities are integrating financial justice reform as part of their work replacing traditional police-led traffic stops where enforcement is deemed appropriate. Based on experiences in the U.S. and around the world, Vision Zero Network considers well-run automated speed enforcement programs, or safety cameras, more effective in improving traffic safety than a traditional officer-led approach, and automated programs can and should be structured to significantly lessen opportunities for racial bias and to also lessen the inequities within financial penalties. We are encouraged to see communities considering switching some activities from police-led stops to automated ticketing and also using the opportunity to try to shift away from the current regressive fine structure.
For example,  California Assembly Bill 550 was proposed in Spring 2021, but did not advance. The proposed bill (thank you Assemblymember David Chiu!) took a proactive approach to changing the regressive of most penalty systems. For instance, it included the following important components (as well as other equity components):

Other states, such as Massachusetts, were working on similar alternatives to police-led enforcement of dangerous driving behavior, such as speed safety cameras and including significant reforms of financial penalties to address inequities.

Ultimately, the goal is to not need traffic safety infraction fines because we’ve designed such intuitively safe systems: roadway designs, vehicles, technologies, and a shift to more safe mobility modes such as walking, transit & biking. Enforcement should be a last resort strategy and, when used, done so judiciously, including limiting police-initiated traffic stops and ensuring any financial penalties are equitable.  In short, we cannot enforce or educate our way out of problems that are, at their core, design and policy shortcomings. Our work needs to focus on redesigning spaces to be self-enforcing, and that will take time.

Until then, we urge Vision Zero proponents to consciously consider how our traffic safety work intersects with equity issues, including working to lessen regressive and harmful fines/fees related to traffic violations.

Other worthwhile ideas include a restorative justice approach, which focuses more on behavioral change than financial punishment. For example, last year the Vision Zero Network profiled a model. The Center for Court Innovation launched the Driver Accountability Program at the Red Hook Community Justice Center in Brooklyn, NY. The program takes a restorative justice approach to seeking accountability for traffic violators and healing for victims and survivors.

And it’s important to connect with leaders and organizations in your community who are working on related issues — perhaps not traffic safety, specifically, but recognizing the connection with those working to decriminalize poverty. We can help infuse worthwhile work being done in other spaces into our own Vision Zero work. And, of course, it is important to inform changes and decisions by directly collaborating with community members themselves — not just about traffic safety concerns directly, but also the consequences of the regressive fine/fee systems.

We’re encouraged to see some cities leaning into new approaches to how fines are associated with enforcement. San Francisco’s Financial Justice Project is reassessing Fines and Fees, including parking- and traffic-related issues.

The Project works with partners to reform fines and fees to lift the burden off those struggling to pay. So far the effort includes cutting the cost of vehicle tows and booting by more than half for low-income people in San Francisco. And they’ve helped waive $33 Million in criminal justice debt and admin fees.  Through building awareness, they have created a dialogue among the public to acknowledge the inequitable burdens of fines and fees to then encourage policy leaders to move forward with solutions.

At Vision Zero Network, we acknowledge this is a new area of learning for us. And here are some of our key takeaways:

Interested in having your voice heard in the discussion? Stay tuned for upcoming webinars and more Vision Zero Network efforts in this area.

And thank you to Priya Sarathy Jones and The Fines & Fees Justice Center for your guidance and efforts.