From Boston’s website: Neighborhood Slow Streets is a new approach to traffic calming requests in Boston. We aim to reduce the number and severity of crashes on residential streets, lessen the impacts of cut-through traffic, and add to the quality of life in our neighborhoods.

Rather than planning and implementing changes one street at a time, Boston will address an entire “zone” – 10 to 15 blocks – within a neighborhood. In Spring 2017, the Boston Transportation Department (BTD) released a call for applications. Neighborhoods were asked to nominate themselves for participation. The application included information about the goal of  slowing car speeds to 20 mph, and the process of working with the City to develop a traffic-calming plan. Potential tools include signage, pavement markings, speed humps, and other low-cost, high-impact changes to manage speed.

The call drew submissions from 47 neighborhoods. The large response emphasized the grassroots excitement and desire to make these changes for slower streets. 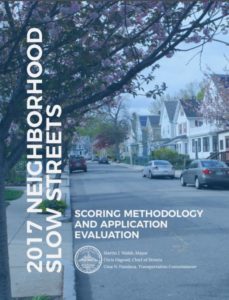 Boston completed a thorough evaluation process that reflects priorities outlined in the city’s Go Boston 2030 plan and Vision Zero initiative and considers where crashes are causing injuries. For example, criteria included percentage of households with children under 18; percentage of population ages 65 and above; presence of schools, parks, community centers; crash history resulting in death or injury; and the presence of bus routes within .5 miles of the neighborhood. This summer, they announced the 5 neighborhood zones that were selected, and shared a methodology document that details their evaluation process. The program stands as a model for other Vision Zero cities.

We sat down with Stefanie Seskin, Boston’s Active Transportation Director, who leads the Slow Streets program, to learn more about its goals and operations. 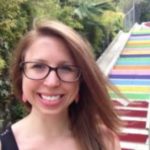 Q: What is new and different about this program compared with Boston’s previous approach to traffic calming?

A: Within the Vision Zero initiative, Mayor Marty Walsh challenged city departments to think about how they could add additional value to what they were already doing to make a difference. The Boston Transportation Department  (BTD) had been receiving many requests for traffic calming from across the city. Before the Neighborhood Slow Streets program (Slow Streets), the city wasn’t able to respond to these requests in a holistic way. The Slow Streets program allows us to take all these concerns and address them more comprehensively. We’ve grown the program to 7 neighborhood zones in 2 years.

Q: How was the city able to integrate this into its existing work program?

A: We looked at New York City’s Slow Zones program (started as part of the city’s Vision Zero initiative), and thought it was a good model for lowering speed limits on residential streets because it added traffic calming components to self-enforce the lower speed limit and addressed a network of streets, rather than one at a time.

Around the same time we were developing our Vision Zero Action Plan, we started working with our two pilot communities. Because all of Vision Zero was new, the Slow Streets program was just one more new thing to figure out along the way.

To open the program to additional communities, we recognized that the application needed to be simple. We asked resident organizations to nominate themselves, provide a map of the location, summarize some of their challenges, and tell us that they’d met with neighbors about the program.

We originally expected that we’d select 2 or 3 new neighborhood zones out of, maybe, 20 applicants. When 47 neighborhoods applied for the program, we knew we’d need to do more. Our residents called on us to include more neighborhoods. Mayor Walsh heard that public call, and worked with Transportation Commissioner Fiandaca, Chief Osgood, and other city leadership to figure out how to accept more neighborhoods. They successfully added money to the budget and increased  the number of new zones to 5 this year.

There’s a lot of high-level support as well as grassroots support for this program.  Mayor Walsh recognizes that these projects will improve both safety and quality of life in our neighborhoods. We’ve been able to fit the expanded program into our existing work. Staff in both the Transportation and Public Works and Departments collaborate closely to keep everything moving. We prioritize review and set quick turn-around time on each submission. We meet regularly to keep tabs on all the Vision Zero projects, including these. We identify any challenges in those meetings and keep each other accountable for following through.

Q: These projects will be implemented in 2 years, how will funding be allocated?

A: Boston has a dedicated Capital budget for Vision Zero. The Transportation and Public Works Departments work together on the Slow Streets program, nailing down costs and scope annually, while maintaining wiggle room to design the program to be successful.

Q: Will the city evaluate post project conditions after projects are implemented?

A: Yes! We plan to have a “before” and “after” evaluation for each project. Most likely, we will measure speeds and volumes after 6 months and then again at the 1-year mark or so. We have to think ahead about what data to collect before and make sure that our data matches the goals for each zones.

We also hope to collect residents’ input about how the streets ‘feel’ to them. For example, we want to know if they feel like speeds are slower and if they feel more comfortable about their kids playing outside.

One of the pilot neighborhoods has already taken on surveying neighbors. In partnership with the Boston Public Health Commission and the Boston Alliance for Community Health, they knocked on every door to get input and started a community of practice to work with peers in other neighborhoods. We really appreciated this work because it helps to underscore the importance of partnerships among various city departments and with residents. We hope to use their survey as a model in other neighborhoods.

Q: How does the evaluation criteria reflect and fulfill Boston’s Vision Zero initiative?

A: A cornerstone of Mayor Walsh’s administration has been to fund what the city values. It is important to have a neighborhood-driven Slow Streets program. It is an opportunity for residents to reassert ownership of their neighborhood and to feel that the project is as much theirs as the City’s. That’s a huge motivation for us.

With Vision Zero, the City wanted to take safety to the next level, to be more proactive than reactive. Our criteria for our most vulnerable users and vulnerable places. We prioritized places with more children, older adults, community gathering places (schools, parks, libraries), and the like, as well as where we saw higher rates of injury crashes. By marrying this data-driven approach with a resident-led selection process, we could give the ownership to neighborhoods while prioritizing needs identified through Vision Zero data.

Q: Did anything surprise you about the applications?

A: The response was fantastic. We expected 15-20 applications, but received almost 50. This very positive response motivated the City to invest more resources into the program. The response also demonstrated that awareness of the program was high across most neighborhoods. We hoped that people knew about the program, but wondered if we’d see a diversity in the applicant neighborhoods — and we did! There’s always more to do, but we are happy with how the first year went.

Q: What is your advice to other cities interested in creating and adopting a similar program?

A: There is a lot of value in having neighborhoods nominate themselves, making the application process very simple, and creating transparency around evaluation criteria. Be clear from the beginning about your timeline and the fact that you will need the community to participate in the planning process. Also, be transparent in your selection process. With the high rate of applications submitted, some neighborhoods who were disappointed not to have been selected, but with the detailed evaluation document, they could understand our rationale.