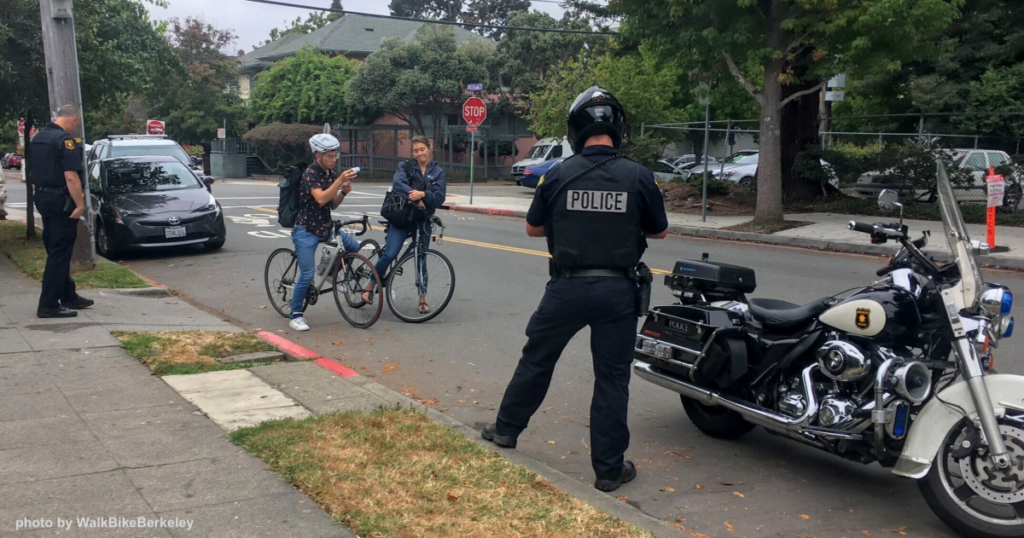 The Vision Zero Network is one of many organizations questioning the role of enforcement in the goal of traffic safety. Traffic stops are the most common way for people in the U.S. to interact with police. And Black drivers are twice as likely to be pulled over and four-times as likely to be searched by police.

For too long, the injustices of the nation’s criminal justice system, including traffic stops that disproportionately harm Black people, other people of color, and low-income people, have been sustained under the guise of traffic safety. This needs to change. Read more about the Vision Zero Network’s approach to advancing equity in our work.

We are facilitating a peer exchange series questioning the role of enforcement in traffic safety work, engaging Vision Zero practitioners from across the country with the goal of developing and supporting alternatives to police-led, traditional strategies. And you can read our letter to the U.S. Congress questioning the inequitable enforcement efforts supported and funded by the National Highway Traffic Safety Administration (NHTSA) and calling for changes.

The community of Berkeley, California is leading the way in shifting police-led activities to new models to support racial justice in the city’s transportation safety work. Learn more in our conversation with Berkeley leaders on the February 25th webinar.

Our conversation with Councilmembers Droste & Robinson and Mr. Owens covered their emphasis on leading with proactive, “self-enforcing” street designs and policies that encourage safe behavior, rather than relying on after-the-fact, punitive enforcement that can lead to racial bias and violence. Read more background on Berkeley’s work here.

The policy changes passed in late February include the following (and more):

See the details of Berkeley’s package of policy changes here.

A few issue areas we discussed that seem especially important and relevant today include:

The webinar ended with Councilmember Droste emphasizing that she’s proud of Berkeley’s willingness to pioneer change in many areas, including how traffic safety work can engage enforcement strategies thoughtfully and equitably. And while Berkeley may be known for having and implementing BIG ideas, there is good reason to expect more U.S. communities to be moving in this — or other new — positive directions to de-police the work of improving traffic safety.