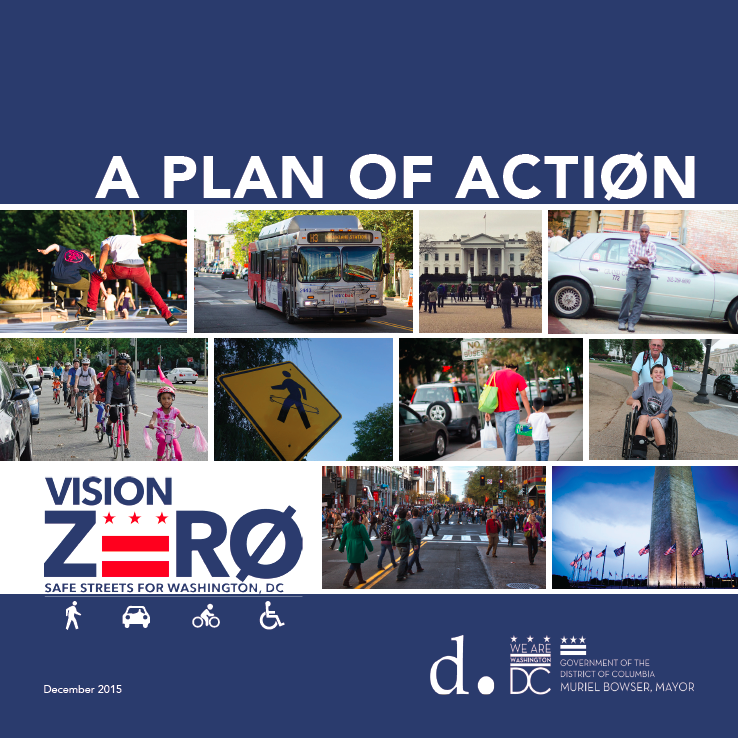 Up on Capitol Hill, policymakers in Washington, D.C. often make headlines for too much talk and not enough action. But down at City Hall, local government leaders for the District of Columbia are working collaboratively and taking tangible steps to change business as usual when it comes to street safety.

Last month, the District released its Vision Zero Plan of Action, a detailed set of nearly 70 specific actions, including legislative and regulatory changes, with the explicit goal of eliminating traffic fatalities and serious injuries by 2024. Thanks to community input, advocacy engagement and deep buy-in from all corners of city government, the Plan makes clears that D.C. isn’t just committed in words, but taking action to shift the status quo.

That didn’t happen overnight. The Washington Area Bicyclist Association has been following Vision Zero for years and making the case for adoption in D.C. since 2014.

“It took a couple of years setting the conversation to a point that, when we had a major leadership change last year, Vision Zero could be part of that dialogue,” said Greg Billings, WABA’s Executive Director. “When Muriel Bowser was elected, her major transportation priority was Vision Zero; it was a key element of what she wanted to do as mayor. So we felt very confident that something was going to happen in the new administration.”

They were right. In March, Bowser made a public commitment to Vision Zero in her new capacity as Mayor — and her administration got to work. Like many cities, the Department of Transportation took the lead in advancing the new initiative. But, moving beyond the norm, DDOT significantly widened the conversation beyond the traditional circle of transportation stakeholders.

“We decided to have a broad call to action among a lot of different agencies, many of which might not have been involved with traffic safety before,” said Sam Zimbabwe, Associate Director of DDOT’s Policy, Planning and Sustainability Administration. “We started with internal working groups with District agency staff focused around the four Es [engineering, education, enforcement, evaluation] and then we added a data working group. These were all internal — no external stakeholders — and I think because of that we were able to get the agencies to open up a bit more about what they’re able to do.”

While it took some time to get new stakeholders up to speed on the transportation landscape, once they got rolling, representative from all corners of D.C. government — from the Office of Disability Rights to the Department of Motor Vehicles (DMV) — didn’t just buy-in to the concept but invested their time and resources to integrate Vision Zero into their day-to-day operations.

“A lot of the work was describing the goal of Vision Zero, which was a little bit of building the plane while we were flying it,” explained Jonathan Rogers, a Transportation Management Specialist with DDOT who led the inter-agency discussions. “We were trying to illustrate how it was different from existing plans and initiatives and what was new about it… Then it was getting agencies to think about their captive audiences; who do they regulate or who are their customers? The Department of Motor Vehicles was a good example. They have a lot of residents in waiting rooms, waiting to get served. So we talked about educational videos, and got them to start playing those videos in their waiting rooms right away. Agencies were really creative and gave a lot of suggestions.”

In fact, for Rogers, one of the highlights of the Plan is a collaborative effort involving the Department of Public Works (DPW) and Metropolitan Police Department (MPD). For years, the MPD has operated nearly 100 speed cameras and more than 40 stop light cameras to reduce dangerous driving behavior. But, because the tickets are issued to the vehicle rather than the driver — a parking violation, rather than a moving violation — many motorists can avoid paying the fines if their cars are registered in other jurisdictions and they don’t get pulled over by the cops in the District. The Vision Zero Plans calls for both expanding MPD’s photo enforcement capacity and also investing additional resources for the DPW to dramatically expand its efforts to boot and tow cars with multiple tickets.

“With stepped up enforcement, we’re targeting those drivers who are habitual offenders with safety violations,” Rogers said. “There are 230,000 vehicles on the list that have two unpaid violations; that’s a lot people gaming the system with safety-related violations. With targeted enforcement, we can catch some of these dangerous drivers.”

Externally, DDOT took steps to get wide public buy-in, as well. During the summer, they hosted 10 community events in all areas of the city, raising the profile of Vision Zero and soliciting residents’ top concerns around traffic safety. Based on more than 2,700 survey responses, District residents overwhelmingly agreed that speeding and distracted driving were the most pressing problems. That public consensus elevated the urgency to change the status quo within the District government and helped to direct the priorities of the Plan.

“We found that 45% of people know somebody who’s been killed or seriously injured in a crash,” Zimbabwe said. “That’s really powerful.”

“Early in the Action Plan, we show all the crashes over the past five years, and it paints the whole street grid,” Rogers added. “It showed that this [Vision Zero] isn’t for one mode or one neighborhood. It’s for everyone in the District.”

Still, while the Vision Zero efforts address all road users, the Action Plan highlights the disproportionate impact of traffic crashes on people who walk or bike. Those walking and bicycling, the Plan points out, accounted for nearly half of all fatalities between 2010 and 2014 — vastly higher than their representation on the streets. While not directly connected to the Action Plan, the Vision Zero progress was also influenced by a Bike/Ped Working Group convened by the City Council. That group included advocates like Billings, but it went beyond organizations like WABA. It also included the Amalgamated Transit Union, AAA and representatives from insurance agencies.

“We discussed 70 different proposals and got to 25 or 30 consensus items,” Billings recalled. “It was challenging to reach consensus on everything. For instance, we couldn’t get consensus on lowering speed limits in the city — but the Vision Zero Plan addresses that, piloting 25 mile-per-hour arterial safe zones and safe neighborhood slow zones to 20 mph. So it was nice to have that discussion happening on the legislative side and the Vision Zero planning on the administrative side.”

And the Action Plan encompasses both — prioritizing culture changes in DDOT and other departments, but also elevating legislative changes. For instance, the Plan includes the Vision Zero Enforcement Act, which would institute a Complete Streets law, and strengthen impaired and distracted driving rules. On the regulatory side, the Plan supports increased fines for dangerous driving, including $1,000 for driving more than 25 mph over the speed limit (up from $300) and $500 for striking a bicyclist (up from $50).

“The legislation and regulatory changes were important so we have more buy-in than just us on the executive side,” Zimbabwe said.

Before the Action Plan was released, DDOT convened two review sessions for advocacy groups and advisory bodies to provide feedback on the draft. “And they pushed us to make it more ambitious in places,” Rogers said. The result: A detailed plan with deep evaluation of the data and strategies implemented thus far — and nearly 70 specific actions centered on four key “themes:”

Creating Safe Streets: Stating clearly that “streets should be designed for all users and need to be built to account for inevitable human errors,” the Plan doesn’t just focus on infrastructure improvements, including protected intersections, but also develops a Risk Analysis Model. The new model represents a significant departure from the status quo, shifting from deploying resources to a dangerous area after a crash has occurred to proactively directing limited resources to areas that have high risk factors — and fix safety issues before lives are lost.

Preventing Dangerous Driving: Noting that “speeding was the top concern of people during public engagement events,” the Plan pilot “safe zone” projects that will reduce traffic speeds to 25 mile-per-hour on select arterial roads and 20 miles-per-hour on neighborhood streets.

Being Transparent and Responsive: While acknowledging the complex landscape of agencies and source of information, the Plan “commits to improve the District’s collection, analysis, and transparency of data for the collective benefit of all stakeholders,” including establishing one public location for all crash and safety data on the Vision Zero website and making that data available in a format that makes it easy for folks outside the government — advocates and citizens — to analyze the numbers, as well.

On the advocacy side, WABA is building community support for the Plan with four upcoming safety audits and four neighborhood workshops around the District. They’re also organizing a Vision Zero Summit for D.C. in 2016 to elevate the leadership of the District government, assess progress thus far and get surrounding jurisdictions involved.

“While D.C. had too many [traffic] fatalities at 26 last year, the region has hundreds of fatalities,” Billings said. “About 425 people die on the region’s streets, 25% of which are people biking or walking. The summit will call on the whole region to take this on as an issue.”

Stay tuned to our blog for updates on the District’s progress — and read the full Vision Zero Plan of Action here.

Previous StoryBuilding on the Rapid Growth of Vision Zero in 2015
Next StoryExploring Intersections: Vision Zero and Equitable Policing