Drivers Urged to “Slow the Funk Down”

Sometimes, the element of surprise can be a tool for safety. That’s what advocates in Denver, Colorado are proving as they send safety messages to drivers using playfulness, creativity…and some beach balls.

WalkDenver is thinking outside of the box to encourage drivers to slow down on local streets. To get drivers to “Slow the Funk Down,” the group uses attention grabbing signs as well as other unconventional, low cost and low effort measures – like colorfully painted tires filled with spotted beach balls and bales of hay – to reduce driving speeds and ensure safer crossings for people walking.

The efforts are focused within Denver’s High Injury Network (HIN), which account for 5% of streets in Denver but where 50% of traffic deaths occur. While Denver’s most deadly street – Federal Boulevard – is slated for signal changes, enhanced pedestrian crossings, new medians and better lighting later this year, advocates know that safety can’t wait and are encouraging drivers to start changing their behavior now with everyday items like painted tires. According to the city’s 2018 Vision Zero Annual Report, Federal Boulevard’s fatality rate last year was 20 times higher than other urban Colorado streets.

WalkDenver’s quick, easy and temporary street fixes to Federal Boulevard appear to be grabbing drivers’ attention and having positive effects. Observations by the advocacy group on their playful street experiment using beach balls and bales of hay did appear to encourage drivers to take turns more slowly and carefully in that area.

WalkDenver was motivated to get more creative in promoting Vision Zero and focus on lowering dangerous speeds when the city experienced a distressing increase in pedestrian fatalities in 2018. (To read more here about the Denver Streets Partnership’s impressive advocacy efforts to hold the city accountable with a recent report card, which gave the city a “C “grade for its Vision Zero efforts.) Given that 26% of people driving within Denver’s HIN were speeding, and that speeding contributed to 41% of traffic fatalities, advocates were spurred to develop innovative ways to grab the public’s attention on this deadly-serious topic…but with a bit of levity.

WalkDenver’s creative safety display is an example of tactical urbanism where advocates, artists, community residents and city leaders use quicker on-the ground improvements to set a vision for longer-term safety changes. While road diets and major redesigns might be the best solution for many cities’ most deadly roads, tactical urbanism is another promising example of how everyday items like tires, beach balls, hay, paint, chalk and creative signs can influence awareness and engage the community at large via low effort, low cost actions.

On display in Denver is a strong collaboration between advocates and community members to educate the public about Vision Zero. The Slow the Funk Down yard sign campaign is the creative outcome of the Vision Zero Community Art Project, an effort led by the Denver Vision Zero Coalition. This larger group, of which WalkDenver is a coalition member, worked with community artists to create funky, eye-catching lawn signs encouraging drivers to slow down while spreading the broader Vision Zero message at low cost and with real community involvement. They’ve even been creative about how to pay for the yard signs through crowdsourced funding. The signs are so popular there is a waitlist for them. 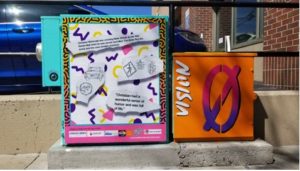 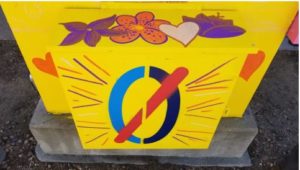 Vision Zero is about saving lives – the most important issue most of us can imagine. But delivering the message in creative, even light-hearted ways can help keep the topic fresh and visible. So, what’s your community’s version of “Slow the Funk Down”?

Previous StoryGuest Post: The Power of a Polite Note
Next StoryVision Zero 101: From Fundamentals to Action