Vision Zero’s Safe Systems approach means moving beyond a rearward review of crash maps to a forward-facing focus on trends and patterns to help identify future problem areas and work to prevent severe crashes before they happen. This means determining, analyzing, and addressing the underlying risk factors that influence dangerous actions: the where, how, and why serious crashes happen.

Under the banner of Vision Zero, communities are digging deeper into this data to implement forward-looking and holistic solutions. Seattle and New York City are two leading Vision Zero cities that have instituted this type of approach in their roadway design efforts to be more proactive than reactive, to systemically identify and address top risk factors and mitigate potential crashes and severity. This approach not only helps save lives, but it also helps communities invest its scarce resources in more efficient ways.

Instituting a Safe Systems approach to traffic safety is a core principle of Vision Zero. 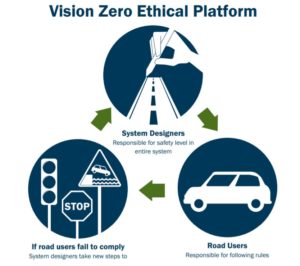 This approach is rooted in recognizing that human error is inevitable, and as a result, system designers and policymakers must design roadways, policies, and systems to prioritize safety.

Adopting a Safe Systems approach involves a fundamental shift from the assumption that crashes happen because of people’s behavior and we must somehow work to perfect human behavior, to an expectation that humans will sometimes make mistakes so the transportation system should be designed in a way that helps prevent these mistakes from leading to severe or fatal outcomes. This means taking a more “upstream” approach, as is often done in the world of public health, to focus on the systems and environmental factors that influence behavior; in the case of traffic safety, this means focusing on policies such as managing speed and instituting safe street design.

The Vision Zero Network hosted a webinar in May 2018 with leaders in New York City and Seattle to highlight ways their cities gather and analyze crash data to determine underlying risk factors of severe and fatal crashes, then use these analyses to develop design solutions to help avoid crashes and mitigate their severity in the the future.

Following is a summary of their presentations, as well as a link to the full  webinar recording below.

Through the data-driven nature of NYC’s Vision Zero initiative, staff and decisionmakers found that left turns were particularly problematic and involved in a high proportion of serious crashes, particularly those injuring people walking. An initial review of data found that left turns resulted in death and serious injuries for people walking and biking three times as often as right hand turns. So, staff launched a Left Turn Pedestrian and Bicycle Crash Study to dig more deeply into the data, identify reoccurring risk factors, and determine appropriate design solutions.

Findings from NYC’s study include the following:

These patterns helped staff to focus in on certain trends and  develop solutions that could be implemented across the city to proactively address potentially problematic left-turn locations. This means they were addressing not only those locations where specific problems had already occurred, but also locations that were prone to future problems.

Staff rolled out design solutions with the specific goal of slowing vehicle speeds during left hand turns and making pedestrians and bicyclists more visible. The solutions include painted turn boxes, vertical delineators, and rubber speed bumps, depending on the situation and location. These and other types of solutions have been implemented at more than 200 intersections throughout New York City. 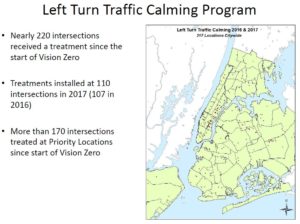 Evaluation of the changes after installation show a marked reduction in median speeds (24% lower) and of drivers crossing the double yellow line (98% fewer). Implementation will continue with priority given to intersections located in Vision Zero Priority Geographies.

Like New York City, staff in Seattle’s Department of Transportation committed to taking a more proactive approach – rather than reactive – to traffic safety issues as part of the city’s Vision Zero initiative. In reviewing annual crash data, they found that people walking, bicycling, and riding motorcycles in 2017 were involved in 7% of crashes, but made up a whopping 89% of fatalities. And of the 19 total traffic deaths in 2017, 11 were pedestrians, far more than any other mode. According to Jim Curtin in Seattle’s Department of Transportation: “This sets our Vision Zero priorities for us.”

Staff then dug into the data further to “aggressively mitigate” the risk factors — aside from individual behaviors — contributing to pedestrian and bicycle injuries and deaths to systemically address and mitigate potential serious crashes. Thus, Seattle’s Bicycle and Pedestrian Safety Analysis (BPSA) was born. 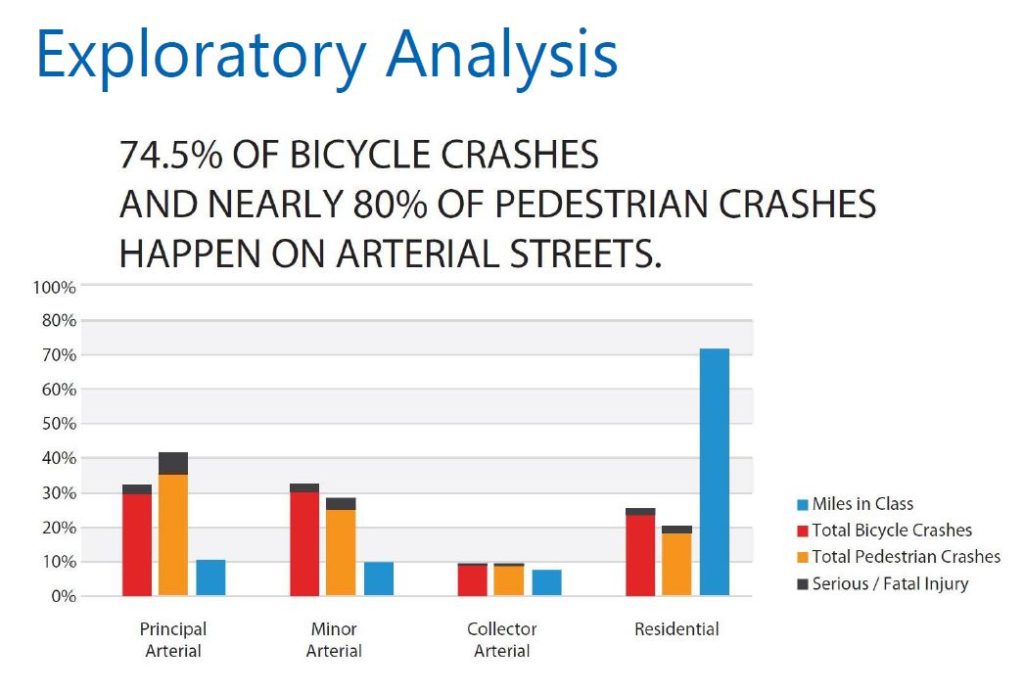 The BPSA found that a disproportionate number of crashes were happening on arterial streets: 75% of bicycle crashes and 80% of pedestrian crashes, despite that arterials make up only 25% of Seattle’s street network.

The BPSA also revealed 16 statistically significant risk factors contributing to bicycle and pedestrian crashes. With this data, staff was able to create a ranked list of intersections and then identify which signal and design changes would be needed to treat known and modeled collision types. In addition, the data is helping staff to prioritize the implementation of safety measures to make sure the solutions implemented are the most effective in the long run, proactively addressing potential crash patterns to treat problems before someone gets hurt. The City is now working to implement on-the-ground safety treatments at the locations ID’d in the BPSA. Some completed projects include an improvement to the Burke-Gilman Trail crossing at 40th Ave NE, a soon to be built Rapid Flash Beacon at 5th Ave NE and NE 115th St, and some minor improvements to the expansion of Seattle’s 2nd Ave Cycle Track.

As next steps, Seattle’s Department of Transportation will continue to collect more collision data points (three additional years of crash data), validate countermeasures or design solutions provided in the BPSA, and develop a bike/ ped exposure model for every street in the city based on bicycle and pedestrian activity.

Vision Zero leaders from both Seattle and New York City believe adoption of Vision Zero in their cities has sharpened their focus on a proactive, Safe Systems approach to traffic safety, including roadway design. While safety has, of course, always been a priority, NYC’s Rob Viola shares that with a Vision Zero commitment, the City went from approximately half of the street improvement projects having a safety focus to 100% of them prioritizing safety. In Seattle, Vision Zero has been a “game changer,” according to Jim Curtin. The entire transportation department now considers the BPSA results while scoping and working on a project.

To learn more details about each city’s Safe Systems approach to design solutions, check out the Vision Zero Network’s recording of the webinar below.