We know that leadership is critical to move Vision Zero from the good-idea stage to real action and progress toward the goal of safe mobility for all. A critical window to engage current and prospective leaders in understanding and supporting Vision Zero goals and strategies is — you guessed it! — during elections.

We organized a call amongst Vision Zero advocates from across the nation in late March to share their experiences in educating and engaging candidates for influential decision-making positions, including Mayors and City Council members. We learned about successes in the Boston area, Tampa, and Jersey City, where savvy Vision Zero advocates moved the Vision Zero issue to center stage during important local elections. We encourage other Vision Zero advocates to consider this effective strategy. Following are some of our key takeaways from the discussion, led by Louisa Gag, Public Policy Director of Livable Streets Alliance in Boston and part of the Massachusetts Vision Zero Coalition; Paul Bellan Boyer co-founder of Families for Safe Streets Jersey City; and Christine Acosta, former Executive Director of Walk Bike Tampa.

The Massachusetts Vision Zero Coalition advocates for the implementation of Vision Zero in Boston, Cambridge, and Somerville, and for the reduction of traffic injuries and deaths across Massachusetts. The coalition includes community-based organizations, nonprofits, businesses, civic groups and individuals representing communities across the state, including the Livable Streets Alliance.

The MA Vision Zero Coalition identified election-engagement as an important part of their Vision Zero strategy, specifically conducting and publicly sharing candidate questionnaires. Their goals included educating the candidates about Vision Zero, putting the candidates on public record with their commitments (or lack thereof), helping voters decide amongst candidates based on their positions, and bringing voters (especially Coalition members) into the process.

You can view the Coalition’s Candidate Questionnaires from 2019 and 2017.

Louisa Gag, of Livable Streets Alliance, acknowledged that the process is a significant amount of work and should not be taking on lightly or without a real commitment to the process. And, the work has paid off, saying the effort has had “huge impact” in their work, especially as a way to document candidates’ support on record to hold them to action if elected. And the response from candidates was quite positive, in the MA experience, with people eager to be involved and to communicate with voters in this way.

It’s important to note that the group did not make actual endorsements of candidates (nor did the other groups described below), nor direct people how to vote, as the groups are not legally allowed to do so under their 501c3 nonprofit status. The efforts described here are purely for educational and engagement purposes, and organizations must ensure they understand and follow the laws on this differentiation.

With Tampa’s mayoral race approaching in the Spring 2019 without an incumbent, the nonprofit Walk Bike Tampa recognized the timely opportunity to move Vision Zero from a non-starter issue with the outgoing Mayor to a priority in the future.

Their efforts culminated in a well-attended, successful candidate forum in late 2018, in which all of the major candidates participated. But as Christine Acosta, former E.D. of Walk Bike Tampa explained, the work started long before. She and other local advocacy leaders spent considerable time learning who had influence in the community to affect change (both currently and up-and-comers) and worked hard to build relationships and trust, introducing the advocacy organization’s priorities over time and steadily.

This paid off with strong attendance in the candidate forum, with all seven of the major candidates participating, and which was well-covered by media. The work also helped position Walk Bike Tampa as an influencer in the local political scene, building its reputation and social capital in the community.

They recognized that they were playing for the long game, as Christine explained of the strategy. “Our future Mayor is here, we just don’t know who it is.” The relationships they built over time did, indeed, prove important in the mayor’s race, but also in other relationships, given that other candidates move on to hold other positions of influence, and the staff of various campaigns often end up tremendously powerful in other positions later. Most importantly, Acosta emphasized, was learning what actions the candidates would commit to implement Vision Zero if they were elected. 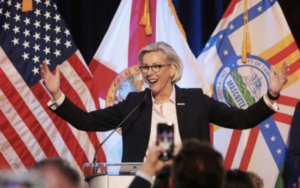 The forum was focused on safety and active transportation issues. And Walk Bike Tampa brought in diverse partners as co-sponsors, broadening its appeal, including AARP, Tampa General Hospital, Downtown Partnership and Pedal Power Promoters. As for the style of the event, Christine emphasized that they did not set it up as a debate, but rather a chance to share ideas and to encourage better understanding and commitment, in an amicable environment. The forum even had a somewhat playful tone, hosted by the editor/columnist of a local newspaper, who rang a bike bell when the candidates’ time was up.

The candidate who won, Jane Castor, a former Tampa Police Chief, has indeed gone on to support Vision Zero, making an official pledge in the Fall of 2019, just a few months after her election.

With the help of advocates at Transportation Alternatives, organizers of Jersey City’s Families for Safe Streets chapter developed a strategic plan for their Vision Zero campaign in 2017. In the plan, they recognized the importance of influencing those with key decision-making power over Vision Zero policies and practices, so they prioritized engaging with candidates for local office, and ultimately also held a candidate forum. And, as in Tampa’s experience, they focused significant energy on building relationships and educating the likely candidates in a well-planned yearlong process leading up to the forum. They participated in community meetings and forums, where they consistently shared information about Vision Zero, elevating victims’ and survivors’ voices and pointing to solutions to make change. Paul Bellan Boyer says their aim was not just to educate the potential policymakers but also to show there was broad and popular support for these road safety issues.

For the candidate forum, they crowd-sourced questions as a way to engage community members in the issue. Bellan Boyer says the group also worked hard to have diverse representation, in terms of participation and questions asked. A goal was to elevate the issue of equitable, safe transportation in the discussions and learning opportunities with these candidates, voters and the media.

Bellan Boyer credits this targeted education campaign and the candidate forum as resulting in a 180-degree turn on Vision Zero commitment with key local leaders. And Jersey City became the first city in the state to adopt Vision Zero.

We’re excited to share another, more recent example of a group promoting Vision Zero integrating candidate engagement in their strategies. The nonprofit Better Eugene-Springfield Transportation (BEST) developed and shared a transportation safety questionnaire with candidates for City Council and Mayor positions in both Springfield and Eugene. Check it out. And way to go BEST!

These and other Vision Zero advocacy groups around the country are recognizing the importance of engaging local and state leaders early and often to ensure they understand — and hopefully commit to support — Vision Zero. Think about the timing for upcoming elections for your Mayor and City Council. It’s never too soon to reach out and ensure that candidates for influential positions understand the importance of Vision Zero.

Update: This post was updated on May 18, 2020 to include another example from Better Eugene-Springfield Transportation.