Recognizing the devastating scale of road traffic injuries as a global public health and development concern, in 2010 the United Nations General Assembly proclaimed this a Decade of Action for Road Safety. That year alone saw 1.24 million people killed on the world’s roads. The UN’s goal: To stem the epidemic and reverse the rising number of road traffic fatalities, saving an estimated 5 million lives over the decade. Issued in 2013, the World Health Organization’s Global Status Report on Road Safety noted that an alarming 27% of global road traffic deaths were among people walking and bicycling.

“To date, these road users have been neglected in transport and planning policy,” the report states. “The world must now increase its focus on making walking and cycling safer, and protecting these road users from high-speed traffic. The benefits of such a move will be far greater than purely the health benefits of reduced road traffic injuries. Benefits will include reduced air pollution and greenhouse gas emissions, reductions in traffic congestion, and the health outcomes that come from increased physical activity.”

The report also states clearly one of the central tenets of Vision Zero, that “with sufficient political will, road traffic deaths can be averted.”

This is a monumentally important shift in thinking, and one that communities across the world are beginning to adopt. From our most to least populous cities, leaders and citizens are beginning to push against the culture of acceptance that has, for too long, enveloped the startling lack of safety on our streets and sidewalks.

Vision Zero is one way that culture is changing. Sweden is the birthplace of Vision Zero — a proven strategy across Europe and now gaining momentum in American communities — to eliminate traffic fatalities and severe injuries. Adopting the understanding that traffic deaths and severe injuries can and should be averted, leaders and community members in places committing to Vision Zero bring multi-dimensional strategies and a data-based approach to ensuring safety for all on the streets.

To help catalyze the momentum in the U.S., I’ll l be researching Vision Zero best practices in Europe this spring, as part of a German Marshall Fund Fellowship. I’ll be interviewing policymakers and practitioners who lead Vision Zero efforts in Sweden, Germany, and the Netherlands — and sharing their winning strategies and lessons learned on the Vision Zero Network blog.

Perhaps no where is the change in thinking around traffic safety more celebrated than in Sweden, which boasts the third-lowest death rate (after accounting for population size) with fewer than 5 deaths per 100,000 people in traffic collisions. Since Sweden adopted Vision Zero in 1997, traffic fatalities have dropped 30%, largely by prioritizing low urban speed limits, pedestrian zones, and physical separation between bicycle and car traffic, as well as thoughtful, data-based traffic enforcement and education to affect behavior. 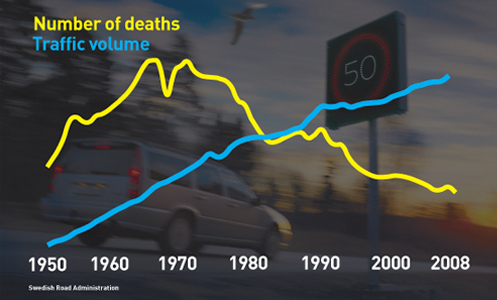 We certainly have our work cut out for us in the United States — with a traffic fatality rate that is two to four times higher than other developed countries in western and northern Europe. The encouraging news is that we are now seeing people question the de facto acceptance that traffic accidents just happen. We see that our peer cities, particularly in Europe, are indeed saving lives and increasing healthy mobility options by prioritizing certain policies and practices. Now, leading American cities are starting to do the same.

New York City is recognized as the first major U.S. city to commit to Vision Zero. Leaders recognized the crisis on their streets, where the rate of traffic deaths is nearly twice as high as comparable European capital cities, including Paris, Berlin, Stockholm, Oslo and Helsinki, according to a report issued by Transportation Alternatives and the Drum Major Institute in 2011.

Leading international cities have indeed been changing their approach and actions to prioritize traffic safety — with impressive results.

Between 2001 and 2007, Paris cut the number of traffic fatalities in the city by half. The “Green Neighborhoods” program calmed traffic, adding more dedicated pedestrian space, widening sidewalks and raising crosswalks, as well as lowering speed limits from 50 kilometers per hour (kmh) to 30 kmh.

Considered one of the safest capital cities in Europe, Berlin has a traffic fatality rate half that of New York City. Speed management is also recognized as key in their success, with more than 70% of Berlin’s road network is designated as 20 mph zones.

And London has installed more than 400 20-mile-per-hour zones, with 11% of all roads in London now regulated to safe speeds. A study in the British Medical Journal found that the introduction of 20-mph zones was associated with a 4% reduction in road deaths and injuries.

For anyone who doubts the potential to advance Vision Zero and to save lives and give people more healthy transportation options, we can look to European cities as models of impressive potential, particularly over the past 15 to 20 years. Learning from the examples of places like Stockholm and Berlin — and adapting them to the American experience, we can indeed reach Vision Zero in communities across the United States.