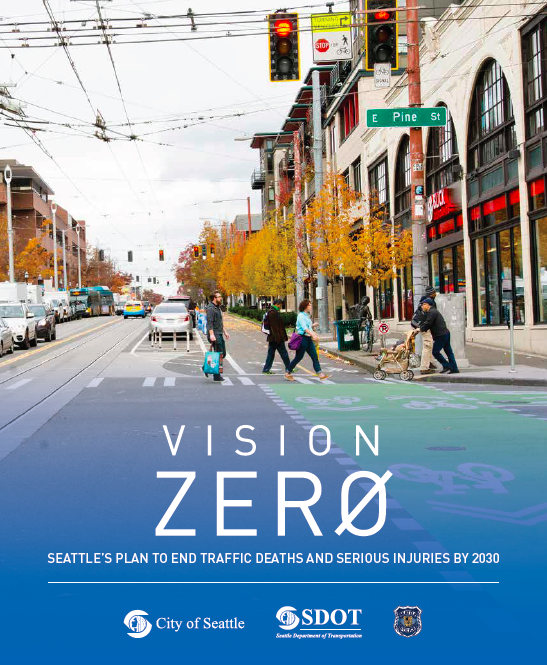 The Mayor of Seattle knows firsthand the trauma of unsafe streets. When Ed Murray was 14 years old, he was struck by a car while riding his bicycle on his paper route. The result: An extended hospital stay and six months of recovery before he could walk again.

Earlier this year, he set a new course for his city to make sure that no child will have to suffer like he did.

“We believe we can have a city where no cyclist or pedestrian is hit or killed,” Murray told the Youth Bike Summit in February.

Committing to Vision Zero, Seattle set a goal to eliminate traffic deaths by 2030 and laid out a clear course to get there. In its Vision Zero Plan, the city noted the concept’s proven track record, not just in Northern Europe but in the Pacific Northwest. “Washington State’s Target Zero program provides an outstanding local example of how these strategies save lives,” the report notes. “Traffic fatalities have dropped 40 percent in our state since the first version of Target Zero was launched in 2000… On Aurora Avenue North, collaboration with the State led to a 28 percent reduction in fatal and serious injury crashes.”

To advance that progress across Seattle, the city emphasized three areas of focus: Street design, policies, and regulation; education and public engagement; and enforcement. For Murray, one of the central components is reducing motorist speed, recognizing the life-saving implications of driving just a little bit slower. 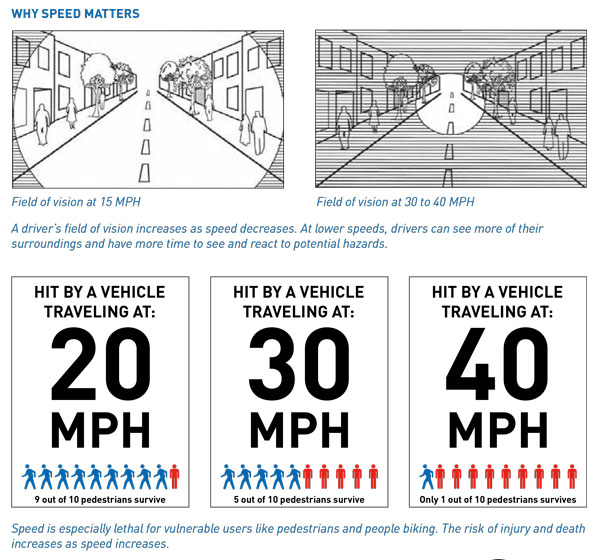 Advocates are optimistic that the new plan will, indeed, spark significant change.

“Vision Zero is gathering steam nationally, and in Seattle it was particularly emphasized when we tragically lost a strong and beloved attorney, Sher Kung, who was biking on 2nd Avenue, the very week before a protected bike lane was installed,” said Elizabeth Kiker, executive director of the Cascade Bicycle Club. “While the campaign just launched very recently, so far it’s being very well received, Safety for all street users is something businesses, drivers, and freight users support — we need to design streets for safety.”

Of course, Seattle is just one of a growing number of cities nationwide that are adopting Vision Zero policies.

In 2014, during the mayoral campaign, Muriel Bowser included Vision Zero as a key pillar of her candidate platform. In February, just one month into her administration — and in the wake of the death of Phillip Snodgrass, a 27-year-old attorney who was killed when a motorist drove onto the sidewalk in downtown D.C. — she reaffirmed the District’s goal of eliminated traffic deaths.

“We need a fresh start to the way we make our roads safer,” Bowser announced last month. “The goal of Vision Zero is simple: reduce serious injuries and fatalities on our streets to zero by 2024. By adopting a comprehensive approach to transportation safety – from behavior to road design – we will make our city a safer place to live and visit.”

It’s been a welcome step for advocates, who have been pushing for Vision Zero for months and are already seeing the promise of the concept in action. “The newly released 2016 budget from the Mayor increases a bike and pedestrian safety fund from $300,000 to $500,000 for Vision Zero,” said Greg Billing, Advocacy Coordinator for the Washington Area Bicyclist Association. “There are now internal inter-agency discussions going on between the Department of Transportation, Taxi Cab Commission, Health Department, Planning Department, DC Metropolitan Police, DMV and others. We expect a draft plan and action agenda by the summer’s end.”

Goal #1 of the plan sets the high bar “to ensure that human life and health are paramount and take priority over mobility and other road traffic system objectives, improve safety through the design and maintenance of sidewalks, streets, intersections, and other roadway improvements such as signage, lighting, and landscaping, as well as best practice programs to enhance and improve the overall safety.”

“No loss of life is acceptable,” City Council Member Joe Goethals said. “We can do better, and this plan is the road to doing better.”

Heralding the progress of other cities and heeding the call of bike/ped advocates like the Livable Streets Alliance, Boston Mayor Martin Walsh added his city to the growing list of major metropolitan areas committed to Vision Zero in late March.

“We’re implementing innovative and inventive transportation strategies and infrastructure upgrades in the City of Boston to improve travel safety and convenience,” Mayor Walsh said in a press release in March. “Whether you walk, drive, take the T, or ride a bike on our streets, we’re looking at solutions that can accommodate every mode of transportation in a meaningful way.”

In September, the Los Angeles Department of Transportation released a new Strategic Plan with a Vision Zero goal to eliminate all traffic deaths by 2025.

But the plan also articulates the need for the Vision Zero approach to be shared by other city officials, calling for the Mayor and City Council to officially adopt the goal of zero deaths and create an interagency task force to ensure implementation.

Stay tuned to the Vision Zero Network blog and social media as more cities join the movement to eliminate all traffic deaths.