In late July, London released a new Vision Zero Action Plan. To call it impressive would be an understatement. In particular, we appreciate that the plan has healthy portions of two key ingredients: Vision and Action.

Here at the Vision Zero Network we strive to share great examples of strong Vision Zero commitments—and action—to inspire your communities. What follows are our first—but very strong first—impressions. We acknowledge that we don’t know London’s political context well enough to fully understand how this plan fits in with other important factors, but based on what we’re seeing here, London is going to be teaching us all a thing….or six.

What’s so great about London’s Vision Zero commitment? Here are our initial thoughts about what’s most impressive in their newly released action plan: 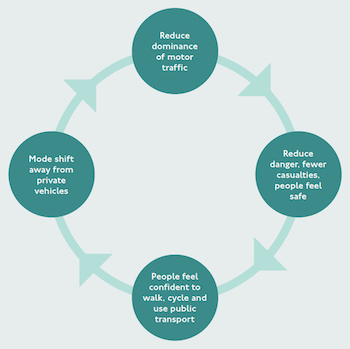 Unlike most U.S. plans, London explicitly points out that Vision Zero success depends on reducing the dominance of motor vehicles and creating streets safe for active travel. It calls Vision Zero “inextricably linked to the Healthy Streets Approach, which puts human health and experience at the heart of city planning.”

This builds on the Mayor’s Transport Strategy, which promotes a shift away from trips by car to walking, bicycling, and riding public transit. The strategy sets a goal (and corresponding policies and programs, such as Vision Zero) to reduce auto traffic in London by 10-15% by 2041, which equates to about three million fewer car trips a day in the city.

Lesson: Vision Zero communities need to stop dancing around this issue and start acknowledging and planning for fewer car trips, a key element in improving safety for all road users.

The plan clearly lays out and commits to the key principles of Safe Systems, the foundation of Vision Zero:

London’s plan and specific strategies harken back regularly to these core principles, which is a new and transformative approach to traffic safety. Simply put: This is not business as usual. 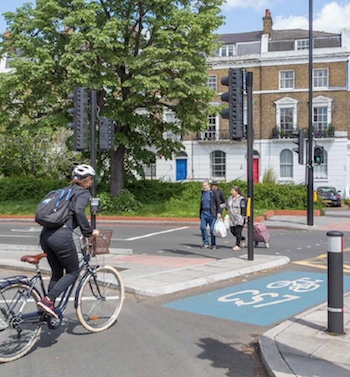 London’s plan states unequivocally: “Reducing speed is fundamental to reducing road danger and to this action plan.” The plan points out, as many other plans do, that speed is the most important determinant in both the likelihood of a collision occurring and the severity of the outcome.

But unlike many other plans, London’s Vision Zero plan commits to clearly defined, bold and near-term actions that are proven to lower speeds and keep road users safe. Most notably, this includes a commitment to lower the speed limit to 20 mph on the Transport for London Road Network, (the roads the city manages within the central city). And they pledge to work with the boroughs to apply this same risk-based approach to reduce speed limits on borough-managed roads.

The plan doesn’t stop there: It also commits to actions to redesign streets to encourage lower speeds, promoting specific, proven design measures; and optimizing the use of speed cameras.

Lesson: Define specific actions to slow driving to safe speeds, including lowering speed limits to 20 mph where you know drivers are mixing with those walking and biking.

Along with focusing on high-risk locations and behaviors to improve safety, London also plans to systematically update its key standards, systems, and checklists to ensure that safety is routinely prioritized.

For instance, as part of their Vision Zero commitment, all design and delivery projects will undergo a Healthy Streets Check for Designers screening to ensure basic standards of safety. And, they plan to update the city’s street design guidance to ensure it addresses the needs of people walking, biking, and driving motorcycles.

Few Vision Zero plans—in the U.S., at least—shine a light on the issues of justice and proper care for the victims of traffic crashes. But as London’s plan points out: These are both “important demonstrations of the Vision Zero principle that no death or serious injury is inevitable or acceptable.”

Specific actions include making the link more transparent between serious traffic crashes and their criminal justice outcomes, showing that there are (or should be) real ramifications to unsafe behavior. And London is expanding its Victims Commission of support services to include victims of road crashes (read about SF’s similar-sounding efforts here).

Lesson: Until Vision Zero is achieved, tragic deaths are happening on our streets, and it is vital to change our response to victims and to ensure that there is justice in our responses that is fair and appropriate.

6. If You Need It, Get It: Work for the Authority to Improve Safety

Again, London does not sugar-coat challenging realities. In many cases, its powers are limited by other levels of government, just as many U.S. cities are held back by state or federal limitations.

London’s Vision Zero plan lays out an extensive list of new powers it needs to improve safety and calls on the national government to extend those powers. These range from amending the default urban speed limit to 20 mph to strengthening the vulnerable road user element of the national driving test to ensuring fines are proportional to actual dangers posed.

Lesson: Don’t pretend you can work around major gaps in what’s needed to ensure safety. If new laws and powers are needed to enact safety goals, then work for them. 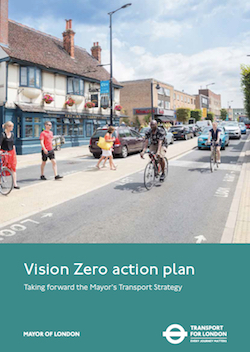 To be sure, London’s new Vision Zero Action Plan contains a lot more impressive calls to action, and we’re excited to learn more and share more takeaways with you. In the meantime, we urge all Vision Zero enthusiasts to take the time to read London’s plan and get inspired to step up your game back home.