Vision Zero is a strategy that works.

Success has been demonstrated in Sweden, where the concept was originated 20 years ago, and more recently in the U.S. as more than 20 American cities have embraced the concept of creating systems change to prioritize safety over speed. In Sweden, the number of traffic deaths was cut in half. In New York City, the U.S. city with the longest standing and most robust Vision Zero program in the country, traffic deaths decreased 30% since the city’s three years of implementation. 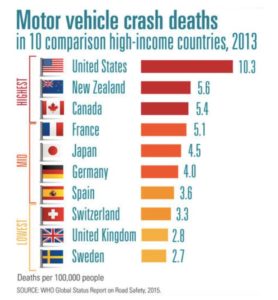 As we look to measure the progress of Vision Zero, we realize that we cannot wait to only count the progress on the long-term goal of reducing traffic deaths, but also in the progress made on individual projects and programs aimed toward safety.

Cities such as Seattle, Washington and New York City, highlighted in this story, are showing success in their project-focused efforts. That is, after one year of project implementation, they are demonstrating reductions in vehicle speeds, crashes, serious injuries, and traffic deaths.

These successes speak to the power of safe street design, and the following details illustrate how success can be achieved.

In 2014, as part of Seattle’s Vision Zero commitment, the Seattle Department of Transportation (SDOT) launched a collaborative process to review conditions along one mile of Rainier Avenue South, a study area for the longer 4-mile corridor. This was a busy corridor experiencing, on average, one traffic crash per day. In a 10-year span before the project, 11 people had been killed, and another 1,700 injured. Most people were driving at 38 mph, where the posted speed limit was 30 mph. A relatively simple redesign on the 1-mile pilot segment reduced the 4-travel lanes to 2, shortened crossing distances for people walking, and provided space for a dedicated transit lane to help improve transit times. 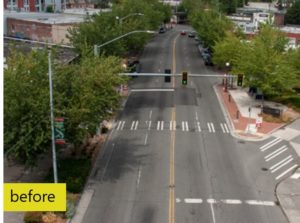 Community engagement was a key component to the strategy. Seattle DOT hosted a community resource fair for residents where simultaneous interpretation was provided in 9 languages, and attended 12 additional community events to seek input on the project.

A one-year analysis after project completion shows a drastic reduction in the number of crashes and injuries. Specifically, crashes were reduced 15% overall, with injury crashes down 30% and pedestrian and bicycle crashes down 40%. Based on the success of this project, Seattle DOT staff has already begun working to redesign the next 2-mile segment of Rainier.

Queens Boulevard, (AKA “The Boulevard of Death”), has been known for decades for its tragically deathly conditions. The years 1993 and 1997 experienced 24 and 22 deaths, respectively. Since then, the number of fatalities had fallen drastically, until 2013 when there was another spike, reaching 8 deaths.

For these reasons, not surprisingly, Queens Boulevard was identified as one of New York City’s Vision Zero Priority Corridors, and in 2013, NYC’s Department of Transportation (DOT) decided to take a deeper dive into research of crash causes and solutions for a new design.

DOT staff reviewed crash data to determine how to phase improvements along the roughly four-mile long corridor, and decided upon four phases. To finalize design details, staff hosted three community workshops, met with local community groups and community boards, visited 184 businesses, collected 800+ survey responses, and had almost 4,000 interactions with community members along the corridor. The resulting solution narrowed the width of one travel lane, and converted a second travel lane into a buffered, combined walking/ bicycle path. Green paint was used to accentuate the bicycle lane. 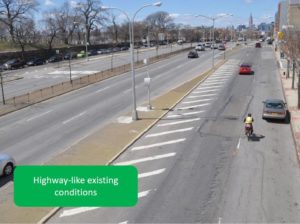 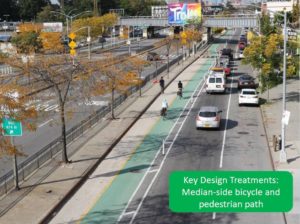 In areas where drivers could merge from the mainline corridor onto the service road, DOT staff designed new markings to ensure drivers slowed their speed and stopped before merging into traffic to reduce high-speed conflicts.

Examples like these are multiplying in cities across the U.S., and it’s important to measure success to provide examples for other cities to emulate. These local-level projects illustrate the power of street redesign aimed at altering dangerous behaviors, promoting greater safety, and saving lives.

This is the essence of Vision Zero.