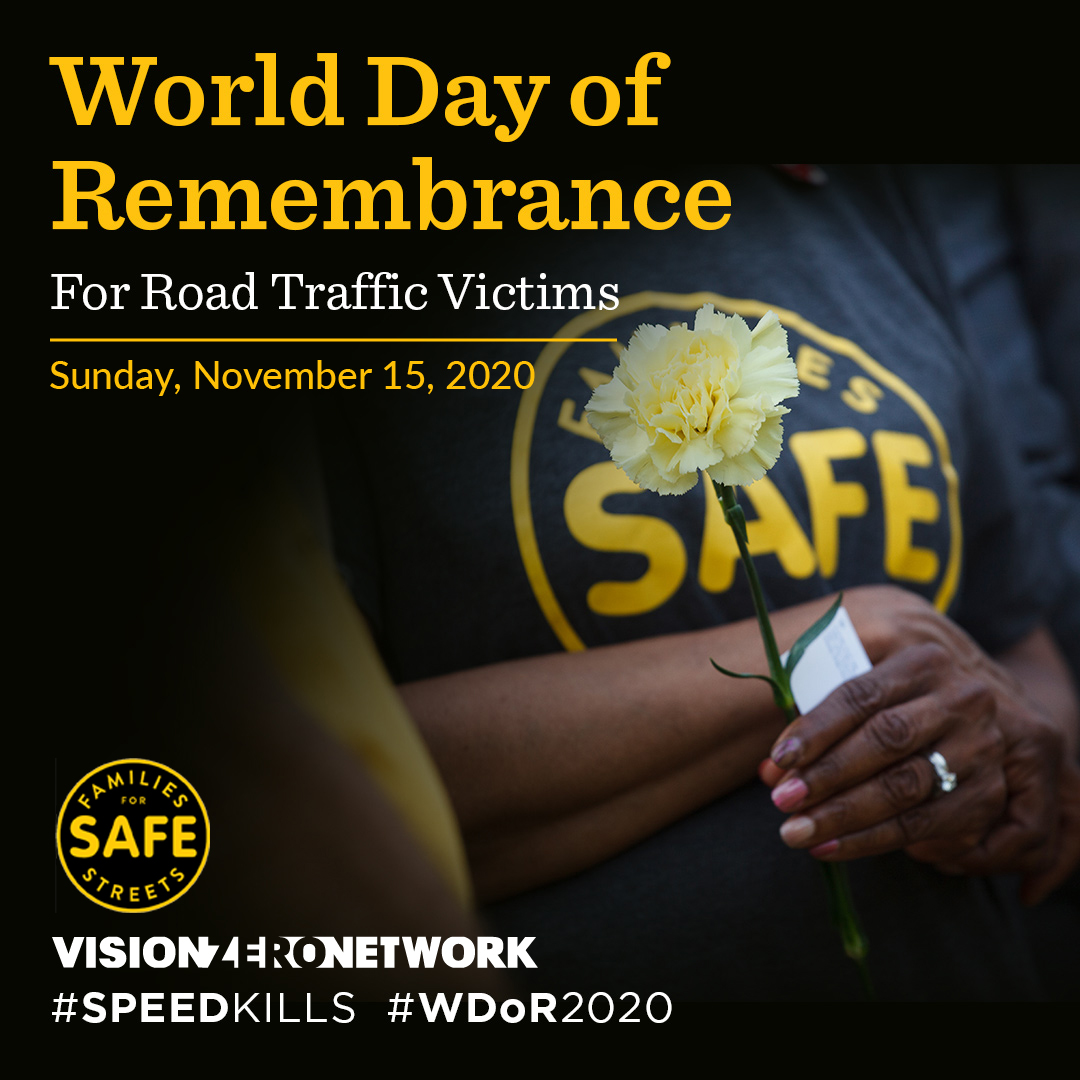 WHAT: On this annual World Day of Remembrance for Road Traffic Victims, communities across the nation and globe are organizing  in-person and virtual events calling to end the epidemic of traffic violence. More than 25 events in the U.S. will include candlelight vigils, rallies, Sermons for Safe Streets, and visual memorials to those lost, as well as a range of online events.

2020 marks 25 years of commemorating this event, and 15 years since it was recognized by the United Nations. Traffic deaths claim 1.35M lives worldwide each year, including 40,000 in the U.S. annually. International leaders, public health officials, and safety advocates consider this a preventable epidemic and crisis requiring greater political commitment, leadership and action at all levels in the next decade.

WHO: Led by members of Families for Safe Streets (FSS), individuals who have been injured or lost loved ones in traffic crashes, organizing to confront the epidemic of traffic violence by advocating for life-saving changes and providing support to those who have been impacted by crashes. FSS will be joined by street safety advocates, faith leaders, community members, elected officials and dignitaries from across the U.S. and globally.

On Sunday, November 15th, survivors and those who have lost loved ones in traffic crashes will be joined by street safety advocates, faith leaders, community members, elected officials and dignitaries from across the U.S. and globally for the World Day of Remembrance for Road Traffic Victims to mobilize to prevent traffic deaths and severe injuries.

An estimated 1.3 million people globally and 40,000 people in the U.S. die each year in preventable traffic crashes. Young people are at greatest risk, as road traffic injuries globally are the leading killer of people aged 5-29 years. The U.S. has fallen behind other nations in keeping people safe — especially children who are twice as likely to die in traffic fatalities in the U.S. compared to other wealthy nations. Deaths amongst people walking in the U.S. has increased by more than 50% in the past decade.

“Traffic violence is an epidemic that we know how to control by managing speeds for safety and designing roadways to prioritize people’s safe mobility rather than their speed, especially important for those walking and biking, and for our kids and seniors, who are most at risk,” said Leah Shahum, director of the nonprofit Vision Zero Network, which promotes Vision Zero strategies to end traffic deaths and severe injuries, adopted by more than 40 U.S. communities. “We know what works, but, frustratingly, many of our leaders seem unwilling to change the status quo by prioritizing safety over speed.”

“On World Day of Remembrance, it will be 2,595 days since I last kissed my 12-year-old son Sammy goodbye and got the call that he was hit by a speeding driver outside of our home. He died a few hours later. Sammy was kind, smart, funny, and a natural leader who, even at his young age, stood up for what was right. He inspired me to join with others who lost a family member or suffered a serious injury in a crash. Together, we confront the epidemic of traffic violence. On Sunday, we join together around the country and around the globe demanding action. Traffic violence is preventable. For our children and everyone’s children, we demand that our leaders show the courage to put in place the proven solutions to end the carnage.”

This year, World Day of Remembrance organizers are joined virtually by Zoleka Mandela, granddaughter of the late President Nelson Mandela, in memory of her daughter Zenani, who was killed in a road crash in Johannesburg at age 13. In her powerful recorded message for organizers, Mandela shares: “As a mother, I stand with you…We can and we must put the solutions in place…The answers are simple & right in front of us. We need low speeds to protect people. Low speeds on our roads are non-negotiable. Our children’s lives are at stake.”