The world’s fifth largest metropolitan area is helping more people move about safely, while also demonstrating that Vision Zero is a viable solution for communities well beyond its birthplace of Europe. Mexico City committed to Vision Zero in 2015, and in its first two years has successfully reduced traffic deaths by a notable 18%, including 24% fewer deaths among people walking and 77% fewer among people biking.

The Vision Zero Network was fortunate to host a webinar featuring Laura Ballesteros, Mexico City’s former Undersecretary of Mobility and one of the champions of the city’s promising program. The main highlights are below, and you can listen to the full webinar here.

Shifting Culture from the Inside Out

“We are a big car city,” Ballesteros said, noting that Mexico City is a megacity region with a population of 21 million, comparable in size to Beijing. In 2017, Mexico City residents made 35 million metropolitan trips, of which 45% was on public transport, 21% was made by private vehicles, and 31% are made by walking.

The work is not easy, Ballesteros acknowledged, particularly in a city that has been geared, as many have, to prioritize car trips to the detriment of safety.

Despite the fact that people walking make up one-third of all trips, Ballesteros observed, government efforts were not working well for them. “We had created a city for cars,” she said. For instance, “we invested 73% of our federal budget for car infrastructure instead of investing in public transport and safe mobility systems.”

That unbalanced and inequitable approach, Ballesteros emphasized, needed to change to ensure safety and equitable mobility to the people of Mexico City. She and other champions, including the mayor and many community and civil service leaders, committed to work for change. 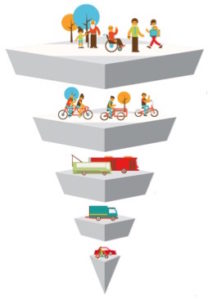 Ballesteros, who had experience as a community advocate and civil service staff before holding leadership positions within government, said the first important step was to change the legislative and administrative framework. With the passage of a new mobility law in 2015, the Ministry of Transport and Roads became the Ministry of Mobility, sending a strong message by creating an overarching framework focused on mobility for all. “We changed the paradigm from a car-oriented model, to a pedestrian and public transport model,” she said.

Mexico City’s new mobility law established a hierarchy, which prioritizes the most vulnerable road users. “This new pyramid was a key effort for us,” Ballesteros said. “Now, pedestrians are the center of the public policy decision-making — and also walking, biking, and public transport are the main focus for mobility strategies, creating a sustainable ecosystem that gives everyone an opportunity, a chance to not only move in the city but also to be safe and alive in their journeys.”

“We established the right to mobility as a social right, as human right, and as a responsibility for the government.” ~ Laura Ballesteros, former Undersecretary of Mobility, Mexico City

The second important step in Mexico City’s Vision Zero effort was to develop strong plans and to allocate funding. The Vision Zero agenda was embedded into key planning documents, setting ambitious goals into the Comprehensive Mobility Plan and Road Safety Comprehensive Program. These plans and programs set ambitious, high-level goals — including decreasing traffic deaths by 35% by 2018 and by 50% in 2021 — as well as focusing on five key issue areas and related high-impact strategies to improve safety. 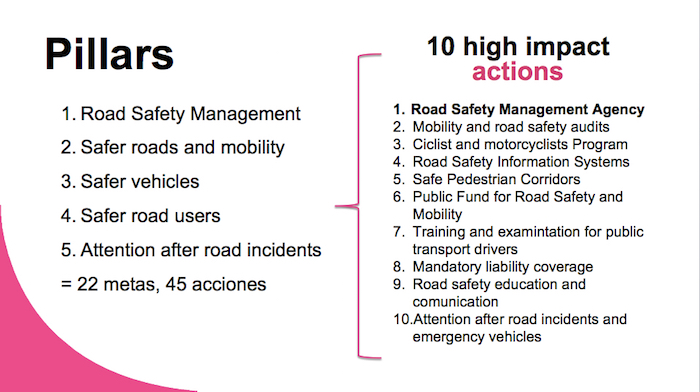 The third step in the process was to take action. Ballesteros emphasized the importance of building on data to prioritize problematic issues and locations, as well as the need for strong political will to bring long overdue attention to the subject of safe mobility. As in many Vision Zero experiences worldwide, Mexico City leaders recognized the need to focus on two primary areas to make significant change: designing streets safely for all road users and managing speed.

“We strongly believe in Mexico City that infrastructure creates culture,” Ballesteros said. They have focused on re-designing streets for safety rather than speed, including adding speed humps, shortening crossing distances for people walking, and dedicating more space to safe biking, and to narrowing roads to calm travel speeds.

Especially around schools, these changes have been big wins for safety. “This is not expensive,” she said. “If you have the political will, you can do it.”

“Speed management is the most important action in order to save lives,” Ballesteros said. Leaders made wholesale changes across the city to align their speed limits with international standards, recognizing that relatively small changes in speeds can mean the difference between life and death. Specifically, the mayor issued an Executive Order that reduced speeds on primary roads from 80 to 60 kph (about 50 to 37 mph); on secondary roads from 50 to 40 kph (31 to 25 mph); and in school districts to 20 kph (12.5 mph).

Ballesteros emphasized that this effort was extremely challenging, but that lowering speeds have made the greatest impact on saving lives. She also acknowledged that there was strong pushback from some in the community, and that the city team could have improved their communications efforts, which she cites as key to progress. In the end, though, she emphasized that effectively reducing speeds — even while enduring some political cost in the process — has been worth saving lives and ensuring safe mobility for Mexico City’s residents. 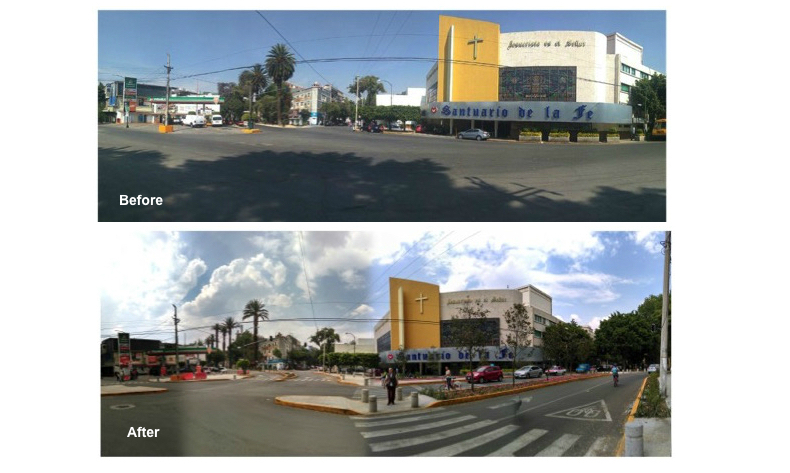 She also emphasized Mexico City leaders’ desire to leverage technology to ensure safety. They have spent the past year fighting for the constitutional right to use photo cameras for safety, and recently won that safety battle when the Supreme Court ruled in their favor. “We are living in a moment where we can use technology to save lives,” she said. “The photo cameras are very important in this effort.”

Another area Mexico City is focusing on within its Vision Zero efforts is working to rebuild trust between its citizens and the government, including police. The goal within the Ministry of Mobility, she says, is to help law enforcement officials serve as “change agents” rather than traditional “traffic police,” noting a balance is needed between officers interacting with people on the street and technology proven to improve safety.

To make Vision Zero transformational in our cities, Ballesteros offered the following advice:

Even though Mexico City has notably decreased the number of deaths and is providing more safe transportation options, Ballesteros knows that it is still not enough. “We need to do it better. Our goal is zero. But just saving one life is worth the whole effort.”