Vision Zero is often associated with large cities in the U.S. — New York City, Los Angeles, Seattle, and Boston are some that come to mind.  But Vision Zero’s Safe Systems approach can work for cities big and small…and everything in between. No matter the size of population or budget, communities can integrate Vision Zero principles into their work by prioritizing safety in decision making and resource allocation. (Check out a blog we wrote in 2017 highlighting efforts in Fremont, California – population 230,000).

Durham, North Carolina – population 265,000 – is another city demonstrating how to prioritize a data driven approach to slow speeds and implement safe street design. The city’s early Vision Zero efforts show how leaders can build on existing strategies such as Complete Streets to focus more heavily on data and speed reduction, while also thinking creatively how to effectively engage community members to understand the “why” behind the actions. We sat down recently with Mr. Terry Bellamy, Durham’s Director of Transportation and Dr. Anne Phillips, Transportation Specialist. 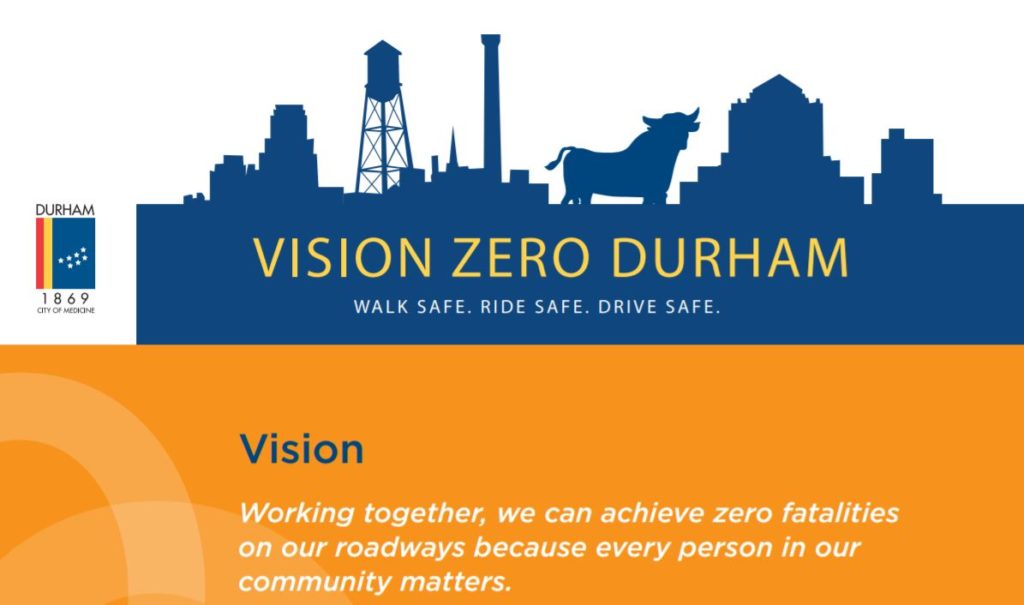 Q: How did Vision Zero start in Durham and what brought urgency to start the initiative there?

A: Terry: I started as Durham’s Transportation Director in August 2016, at a time when the city released its Annual Accident Reduction Report (since renamed Crash Reduction Report). I wanted to know how the city was responding to the data in the report and saw an opportunity to change the way the city thought about crashes. Having worked in San Antonio and Washington, DC where Vision Zero was already active, I started highlighting Vision Zero as a way to proactively address traffic deaths and educate elected officials and other city colleagues. Within eight months of my start [in Durham], we started meeting with other departments, such as public affairs and the police, and in September 2017 the City Council adopted a resolution committing to Vision Zero.

Q: What is your Vision Zero team working on now?

A: Terry and Anne: Our big push now is to lower speeds. We found that most injury and fatal crashes were happening on high-speed arterials. We have completed four road re-channelization projects (aka road diets) on these arterials, and collector streets, in the last five years. Some of these projects involved reducing four travel lanes to two, and others involved removing on-street parking to add bike lanes. We have five additional projects planned in the next two years, and an additional 13 projects going out for public input.

In addition, we are preparing to ask Council to reduce speeds to 25 mph (from 35 mph) in designated areas – targeting local streets in and near downtown Durham where there is more local business activity, the convergence of university students, and more people walking in general. We’ll be working on this during the next year.

Another priority for us now is to finish our Vision Zero Action Plan, and it’s important because it will be our blueprint to determine the resources we need to get to zero. We released our draft Action Plan to our Vision Zero Steering Committee earlier this year for comments and want to finalize it towards the end of 2018 or early 2019. We will engage with the community to solicit feedback on the plan, some of which will happen through Play Streets festivals (see below), and other outreach through traditional neighborhood meetings.

“The Action Plan will be our blueprint to determine the resources that we need to get to zero.” – Terry Bellamy

“The Action Plan will contain measurable goals that will keep us honest.” – Anne Phillips

Q: What are 1-2 challenges you have faced and how are you working to resolve them?

A: Terry and Anne: We are working to synthesize crash data. Our state’s North Carolina Vision Zero initiative created a data dashboard which is intuitive and easy to use. Researching this data further, we noticed their data had slight variations from local data, so we are digging into local data to make corrections. Further, we are working to geocode data to get a better overall picture of where crashes are happening and to make this data accessible to the public.

In addition to the work to slow speeds, we are working to boost education on Vision Zero – especially in our schools – and attending more community events and festivals than ever before. We see this as a better option than getting law enforcement involved in Vision Zero. In 2017, our Department of Transportation adopted a school to interact with through a year-long program. Our staff members helped that school with food drives, and co-sponsored a Walk to School Day. This effort really helped our staff learn who is in the city, and get a sense of community and the challenges families are facing, breaking down barriers between government and residents. 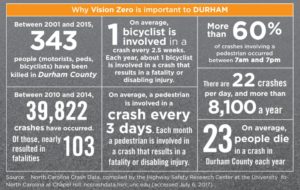 Q: How are you thinking about/ or already addressing community engagement and equity in your Vision Zero initiative?

A: Terry and Anne: Durham is a majority-minority city. This has been in our minds as we frame communication around Vision Zero. We are trying to be equitable in education and engagement efforts – going into traditionally disenfranchised communities. We recently participated in a Play Streets event hosted by our city’s Neighborhood Improvement Services (NIS) Department. The event was in East Durham, a traditionally African American neighborhood in Durham, and we plan to participate in another one of these in June. These events offer a great way for us to make sure we are reaching minority residents with our Vision Zero messaging, and to get their feedback on improvements that can be made in their neighborhoods (that may or may not be reflected in crash data). We also like that these festivals encourage folks to take ownership of their neighborhood streets.

Q: What are 2-3 top mid-range goals for Vision Zero in Durham?

A: Terry: We’re really focusing on changing street design and adding new infrastructure to improve safety. This will include the completion of five more re-channelization projects during the next two years or so, new pedestrian countdown signals at all the city’s signalized intersections through a $20 million, three-year signal update project, and more pedestrian safety infrastructure such as flashing beacons and new HAWK signals. As we add this new infrastructure, we want to work with the city’s public affairs office to explain what these things are and why they are important.

Q: Are there lessons learned that you would pass along to other mid-sized cities?

A: Terry and Anne: Vision Zero may seem insurmountable, but (I would say to other cities) what is your city already doing that has Vision Zero elements? Build on these to adopt Vision Zero, and to shift how funding is happening. In addition, make sure to bring more community engagement. In addition to working more with the community, we have worked hard to make materials more visual, and therefore more accessible to the general public – breaking away from traditional norms.