San Francisco, CA — As momentum grows across the U.S. to overhaul outdated strategies that fail to prioritize safety over speed, the State of California will consider new recommendations to modernize its speed-setting practices as part of an increasing call for change in traditional roadway safety practices.

A new report released this week, mandated by the CA Legislature, charged the California State Transportation Agency (CalSTA) to convene a state Zero Traffic Fatalities Taskforce to identify changes to speed setting methodologies and other steps to reduce traffic injuries and fatalities.

“This calls for a long-overdue shift in how we make speed-related policy decisions that literally influence life or death results,” says Leah Shahum, Director of the Vision Zero Network, a nonprofit supporting the goal of zero traffic deaths and severe injuries across the nation. “More than 40 communities have committed to Vision Zero, and one of the common roadblocks they face is outdated state rules limiting cities’ ability to respond to urgent calls from the community for safer streets, sidewalks, and bikeways with proven measures to manage speed. It’s time for change to give communities the right to prioritize safety over speed.”

Evidence shows that speed increases result in greater likelihood of both the occurrence of a crash and the severity of a crash. This is particularly critical for people walking and biking, in which case the motor vehicle speed is a significant determinant of whether the person hit will survive.

Local communities across California and the nation lauded the report as a step in the right direction that deserves action: 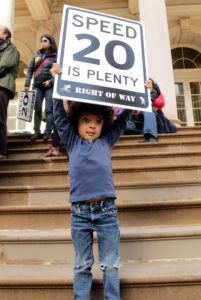 San Francisco: “The Zero Traffic Fatalities Task Force further confirms what we know to be true locally,” said San Francisco Board of Supervisor’s President Norman Yee. “Speed kills and we must use every tool and technology to prevent collisions and fatalities. The data is undeniable, and San Francisco must lower speed limits and implement Automated Speed Enforcement.”

Los Angeles: “The current rules put cities in the awkward position of approving speed limit increases because drivers are speeding. That doesn’t make sense, and the findings in this report further validate that,” said Seleta Reynolds, General Manager of the L.A. Department of Transportation. “Cities like Los Angeles need the flexibility to set speed limits that fit their urban environments. We were grateful for the opportunity to participate in this groundbreaking work and look forward to championing these recommendations that, if implemented, will save lives.”

San Francisco: “The state’s new report makes it clear that the current way of setting speed limits makes no sense in the year 2020, especially when you consider roads with frequent crashes as well as streets used by people walking and biking,” says Jodie Medeiros, Executive Director of Walk SF, an advocacy organization leading Vision Zero efforts. “Now we need the state to act quickly to turn this report into action. We want to see a new speed setting approach that puts safety first.”

NACTO: “We cannot reduce traffic fatalities on city streets without reducing speeds,” said Corinne Kisner, Executive Director of the National Association of City Transportation Officials (NACTO), which will soon be releasing a guide for setting speed limits on city streets. “Too many cities are hindered by outdated laws that prevent them from setting sensible speed limits. It’s time for states to empower cities to deploy the tools they know can keep all street users safe as the status quo becomes increasingly deadly. We applaud CalSTA’s recommendation to develop a new approach for establishing speed limits that prioritizes safety over convenience, and urge California’s state legislature to take immediate action.”

California joins a growing number of communities across the country considering changes to the decades-old practice of speed-setting, commonly referred to as the “85th percentile approach,” which studies and a federal-level report released by the National Transportation Safety Board (NTSB) in 2017 has described as “dated” and “may not be valid under scrutiny.” The NTSB report includes a recommendation to “at a minimum, incorporate the safe system approach for urban roads to strengthen protection for vulnerable road users.”

The Safe Systems approach, used in other nations and increasingly embraced by Vision Zero communities, sets speed limits according to the likely crash types, the resulting impact forces, and the human body’s ability to withstand these forces. It allows for human errors and acknowledges that humans are physically vulnerable, therefore setting speed limits to minimize death and serious injury as a consequence of a crash.

In recent years, Oregon, Washington, Massachusetts and New York are moving toward this Safe Systems approach. These states are increasingly enabling their cities to lower speed limits and are exploring alternative methods to establish speed limits based on safety goals and local context instead of the traditional 85th percentile speed. And an even larger number of Vision Zero cities in the U.S. are calling for greater flexibility in setting speed limits at lower, safer levels. (Example of Portland, Oregon’s leading efforts here.)

“Speed has been a leading killer on our roadways for decades, and we’ve needed significant interventions for just as long,” said Lorraine M. Martin, president and CEO of the National Safety Council. “NSC is pleased to see the formation of the Zero Traffic Fatalities Taskforce and looks forward to supporting its life-saving work.”

The new report recognizes that “Although California has become highly urbanized and its roadways have changed significantly, reflecting different modes of transportation including bicycling, walking, and scooters, the method for setting speed limits has not been modified to reflect these changes.” Of course, the same can be said about states across the nation, where the outdated 85 percentile approach still reigns.

The California report recommends exploring new approaches that prioritize safety and meet the needs of all road users, especially people walking and biking, as well as offering agencies greater flexibility to establish lower speed limits through the revision of speed-limit-setting procedures and the expansion of special low-speed zones.

The report adds to growing dissatisfaction with the traditional approach of speed-setting in the U.S., which was developed in the 1940s-1950s, based on rural road conditions that are very different than today’s urban environment. The traditional approach relies on a crowdsourcing-style method, as well as the belief that most people drive at safe and reasonable speeds. State and federal-level analysis shows that this approach can lead to the unintended consequence of “speed creep,” which actually reduces safety on the roadways. (See 2019 research here)

An analysis of the limitations of the 85th percentile methodology conducted by the University of California Institute of Transportation Studies concluded that “after eight decades, vehicles are different, our aspirations for the uses of streets are different, and our safety goals are more ambitious.” The researchers add that, ultimately, “the conjecture that safe speed limits should be determined based on the actual driving habits of drivers cannot be used to establish safe travel speeds on local streets.”

In California, nearly 3,600 people die each year in traffic crashes and more than 13,000 people are severely injured. Collectively, these traffic crashes cost California over $53.5 billion. Of the 37,133 traffic fatalities nationwide in 2017, 9,717 (26%) were involved in crashes where at least one driver was speeding. This is close to the percentage of impaired driving-related fatalities, yet speed receives only a fraction of the policy attention and resources as impaired driving issues, largely due to the lack of political leadership. Speeding “remains a publicly-accepted driving behavior that is reinforced among motorists, policymakers and transportation stakeholders,” according to a 2019 report, Speeding Away from Zero: Rethinking a Forgotten Traffic Safety Challenge, released by the Governors Highway Safety Association and which calls for bolstered political leadership and systemic change to managing speed for safety in the U.S.

In addition to implementing speed-setting practices that prioritize the safety of all road users, other key recommendations in the California report include the State expediting safety-related street design project, assisting localities to develop High-Injury Networks, and allowing greater flexibility to adjust speed limits in these areas and near vulnerable populations, such as playgrounds, parks, homeless shelters, and senior centers. The report also touts the proven benefits of using automated speed enforcement, or safety cameras, to compliment traditional enforcement, as a growing number of Vision Zero communities are doing with impressive safety benefits.

“We look forward to the State of California stepping up its leadership and commitment to safety for all road users and implementing the proven speed management strategies outlined in this report, starting with setting speed limits for safety,” says Leah Shahum, of the Vision Zero Network. “This is the direction in which states should be moving across the country as local communities recognize that they have the ability to prioritize safety over speed and call for  changes in the status quo.”

Background information on the topic of speed-setting for safety: