Looking at trends in the short term doesn’t always paint a complete picture. Nevertheless, we can’t help but be discouraged by the direction of traffic safety in the U.S. described in two recent reports — one from the Centers for Disease Control and Prevention (CDC) and another from the National Highway Traffic Safety Association (NHTSA). Both reports analyze recent data to answer a similar big picture question: When it comes to traffic safety, how are we doing? Unfortunately, the answer is “not good enough.”

We applaud the CDC and NHTSA for shining a brighter light on traffic safety and placing the issue in broader context: the CDC report compares traffic fatalities in the U.S. to 19 other wealthy, developed countries using 2013 data, while the NHTSA report looks at preliminary 2015 data to compare fatalities across U.S. states.

It’s embarrassing — not to mention tragic — that the U.S. lags so far behind our international peers when it comes to ensuring safe mobility. According to the CDC report, not only did the United State 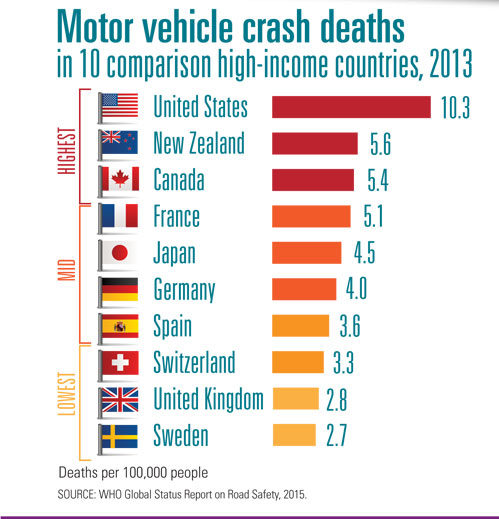 NHTSA’s analysis of 2015 data shows an even more troubling trend: estimates show that a stunning 35,200 individuals were killed on U.S. roads last year, which is the largest year-over-year percentage increase (7.7%) since national record-keeping began. It’s too soon to tell if 2015 is an outlier in an otherwise generally positive trend, but we can’t let possible short-term anomalies distract us from the long-term problem: far, far too many people die every day in traffic.

So, what do the reports recommend to turn this troubling trend around?

Not enough, frankly. While the CDC report contains reasonable recommendations, neither calls for enough action-oriented urgency in addressing what is a clear public health epidemic in our country — 90 people dying each day in the U.S. in what the CDC report acknowledges are “predictable and preventable” events. It seems that the uptick in urgency and demand for Vision Zero at the local level hasn’t quite made its way to the national policy level yet.

The CDC report recommends “bringing policies in line with best practices (e.g., related to child passenger safety, seat belt use, and alcohol-impaired driving), enforcement, infrastructure, vehicles, and technologies such as ignition interlocks and automated enforcement (cameras).” All good. But its online recommendations of “What Can Be Done” neglects to mention proven policy and design options that would have the greatest impact on saving lives. For instance, “Obey Speed Limits” is listed as a recommendation in the section aimed at drivers, yet no form of speed management is mentioned as a policy recommendation at the Federal or State level (and there’s no mention of the local level at all).

To be fair, data on speed-related risk factors are harder to come by (especially for international comparison), and the report highlights the need for better data collection. But the World Health Organization acknowledges the key link between speed and injury severity, particularly for the most vulnerable road users. And the nations with the highest traffic safety rates, such as Sweden and the United Kingdom, have been very public about their focus on speed and infrastructure in their successful efforts to curb traffic deaths. They did so, in large part, because the governments instituted systemwide, policy-level changes that focused on safe speeds; automated speed enforcement, lower speed limits, greater public promotion of the safety impacts of speeding, and physically re-designing roadways to encourage safer speeds and be more forgiving of human error. These are the proven, high-level, policy-level changes that will make a difference on our roadways. These are the “upstream” approaches to traffic safety that a public health approach to problem-solving advises us to adopt, not reliance on persuading individuals to simply just behave better.

We won’t save the number of lives we aim to without shifting our understanding of traffic violence from an individual behavior problem to a design, policy, and organizational practices problem.

And the CDC report hardly acknowledges that traffic violence disproportionately hurts some people more than others, including people walking and bicycling, as well as seniors, children, low-income people and people of color. These are serious health equity issues that should be getting attention — and policy-level actions — from our national institutions, especially as calls to encourage more healthy physical activity grow (see the CDC’s Call to Action to Promote Walking and Walkable Communities and the U.S. Department of Transportation’s Safer People, Safer Streets Initiative).

We appreciate venerable institutions like the CDC reporting on and bringing attention to traffic violence as a pressing public health issue. The hesitancy in the report to directly call out what needs changing is another sign of how a “business as usual” approach is perpetuating today’s traffic safety problems, and how urgently a systematic, coordinated reframing of our approach to traffic safety is needed from our leading institutions. We would all benefit from the public health community taking tips from its own successful playbook in shifting cultural norms; look no further than than the brilliant strategy to curb smoking in the past generation.

What would such a reframing of traffic safety look like? It would start with the nation’s top health protection agency recommending that states and local governments implement proven speed management strategies to save lives; that the federal government link funding directly to safety measures; that local (and regional) governments be rewarded for successful, measurable policy changes around traffic safety.

Local communities across the country are stepping up to challenge the status quo of unsafe conditions on our roadways by committing to Vision Zero. They’re doing this by analyzing their data to prioritize efforts where they will save the most lives, and by breaking down organizational silos between government agencies and disciplines to reach the shared goal of zero traffic deaths and severe injuries.

While we won’t achieve the ambitious goal of Vision Zero overnight, we can’t afford to spend another day pretending that we can get there by conducting business as usual. We owe the tens of thousands of people who lose their lives every year and their loved ones the commitment to do better, which means acknowledging our system’s shortcomings and making changes. We will need strong, brave leadership at the local, state and federal levels to reverse the troubling trends revealed in these reports and, more importantly, to save lives.