The National Transportation Safety Board released a study today

underscoring the deadly problem of speed in the U.S. and urging action to save lives. The study calls the problem of speed underestimated and underappreciated, and explicitly emphasizes the need for reform of outdated practices and policies, including allowing greater local control of managing speed. 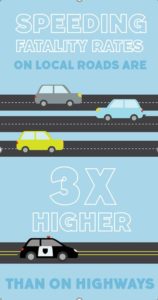 Vision Zero communities across the nation lauded the study’s findings and urged action. Today, local roads bear the brunt of traffic deaths – three times as many as  highways – but cities are barred or discouraged from using proven speed-management strategies by outdated policies and standards at the state and federal levels.

“People in cities are disproportionately impacted by outdated thinking about how we manage speed,” said Leah Shahum, founder and director of the Vision Zero Network. “Children, seniors, people of color, low-income residents, and people walking and bicycling bear the brunt of this often-overlooked public health and safety crisis that claims the lives of as many Americans as drunk driving.”

The NTSB study serves as a wake-up call for government at all levels, as it identifies a dangerous lack of attention and action toward a problem related to 10,000 deaths on U.S. roadways each year.

“Clearly, local communities need the authority to use proven strategies to slow speeds and save lives,” said Shahum. “We applaud NTSB for calling attention to this deadly problem and for urging action to prioritize safety over speed by updating practices toward setting speed limits, enforcement, and designing roadways for safe speeds.”

Speed Management is a Fundamental Tenet of Vision Zero

Managing speed is a fundamental tenet of Vision Zero, a safe system approach to traffic safety that is gaining ground in communities across the nation. Vision Zero 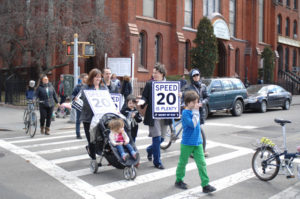 acknowledges that traffic deaths are preventable, and that this is a public health issue that calls for a systems-level, prevention-based approach. It is an interdisciplinary approach, coalescing diverse stakeholders to address a complex problem. And, Vision Zero is a data-driven approach that combines the power of data with human experience and an ethical responsibility to keep people safe.

The Vision Zero Network works with cities across the nation who have committed to Vision Zero and are working to transform their approach to prioritize safety over speed. Unfortunately, many local policymakers’ hands are tied by outdated and ineffective standards and practices. The NTSB study calls out these ineffective historic policies and calls on states and federal agencies to allow greater local control of speed management strategies, including setting speed limits with consideration of safety for people walking and biking and use of automated speed enforcement.

Of particular note in the Study’s findings:

We know that when it comes to advancing Vision Zero, speed matters most, and local communities have been stepping up to fill a leadership void on this issue. NTSB’s study comes at a time when cities are exhibiting greater political will to to manage speed for the sake of safety. Now they need the support at the state and federal level.

We know that we cannot prevent all traffic crashes, but we can manage speeds so that crashes are less severe and survivable. A top priority for the Vision Zero Network is elevating awareness of and action toward managing speed for the sake of safety. We want to lift up the positive work happening in Vision Zero cities and eliminate the barriers to safe mobility for all.

Read more about the Vision Zero Network’s response of the NTSB Speed Study, including examples of Vision Zero cities successfully implementing speed management techniques and saving lives, and reactions from other leaders across the nation here.