Big cities aren’t the only entities embracing Vision Zero as a game-changing way to prioritize safe mobility for all. While many of the first communities in the U.S. were, indeed, larger cities, we are also seeing a growing number of smaller and suburban communities who are shifting toward the Safe Systems approach of Vision Zero. They are proving the point that Vision Zero is an approach, built on Core Elements, that can be applied to a community of any size – big or small – and type – urban, rural, or suburban.

In our webinar, which you can view below — Not Just Big Cities: Vision Zero in Mid-sized & Suburban communities  — we learn how smaller communities are making a big impact thanks to their Vision Zero commitments. Specifically, we hear about the experiences of Alexandria, Virginia and Bellevue, Washington. Both cities are part of major metro-regions, with similar populations in the range of 145,000 residents. Compared to their bigger-city neighbors, Alexandria and Bellevue have smaller budgets and staffs, but no shortage of ambitions and potential to make change on their streets, sidewalks, and bikeways.

Alexandria became the first community in the Commonwealth of Virginia to commit to Vision Zero in 2017. See their Action Plan.

Christine Mayeur, Principal Planner in Alexandria, leads the city’s Vision Zero efforts, working with an interagency groups to plan and implement safety improvements in infrastructure, policy, and, overall, helping the city shift to a Safe Systems approach to traffic safety.

Building on the Core Elements of Vision Zero

While the work in Alexandria is data driven, Mayeur also emphasizes the importance of complimenting crash data with experiences they hear from the community, and this means going beyond just listening to the “squeaky wheels” who may have greater resources and capacity to make their voices heard. As in many Vision Zero communities, Alexandria is trying to emphasize equitable input and outcomes through its work.

Mayeur acknowledged that she and her colleagues have to wear many hats in their Vision Zero work, including managing program budgets and planning, working on bike share and dockless mobility, overseeing capital projects, implementing Safe Routes to Schools and pedestrian and bike master plans, responding to citizen requests, providing legislative coordination, conducting grant applications, and more. To address staff and budget limitations, they are working to integrate the Vision Zero approach into all projects and programs and funding decisions. This includes leveraging the regular repaving budget to prioritize safety-oriented projects and to link data sources (such as police crash data and medical data), as well as trying to shift from a reactive approach to traffic safety to a proactive one (read other cities’ experiences in this Vision Zero Network case study).

An example of Alexandria’s more proactive (versus reactive, spot-by-spot) approach includes it taking administrative action on restricting right-turns-on-red ( “No Turn on Red”) as a broad safety priority versus waiting to address problem areas only after severe crashes. The city also is giving pedestrians a 3-to-7-second head start at 10 historically dangerous intersections. Also, Alexandria is broadening the scope of how it measures road “performance,” relaxing LOS standards (the traditional approach of measuring Level of Service for auto traffic) in exchange for a focus on safety. For more information about these efforts, read this article on Alexandria’s approach to Vision Zero strategies, which can be implemented by a community of any size and budget. The city is expanding the red light safety camera program, along with many other Action Plan implementation efforts described in this update – another example of Alexandria’s commitment to engaging the community thru transparency and accountability.

Changing culture – both within the City family and beyond to the public – is another emphasis of Alexandria’s Vision Zero program. As an example of an internal shift of culture, Mayeur focuses on training staff, internally, on the Core Principles of Vision Zero to deepen understanding and buy-in. She also points to their work helping departmental staff understand the need to shift from traditional, strict LOS standards to more safety-focused performance measures. This is part of building a true culture of safety within the city agencies’ staff and leadership. And, for the public, she emphasizes the importance of humanizing the issue of traffic safety, helping people understand and empathize the impact Vision Zero changes can have. She refers to the “parking lot conundrum” of people generally prioritizing their mobility and speed while driving and looking for a parking space, and then switching to caring more about their safety after they park and become pedestrians within the same parking lot.

Mayeur also acknowledges the challenges that many local communities experience given having varying degrees of control over state-owned roads, which are often some of the most problematic for safety.  There is often an urban/rural divide of priorities. For example, there seems to be more support for proven safety countermeasures such as Automated Speed Enforcement, or safety cameras, amongst those in cities than those in less urban areas. Coordinating with other staff (both within and beyond Alexandria) to align principles and strategies takes significant time but has significant positive returns, Mayer emphasizes.

In general, she urges communities – of any size – to borrow good ideas and learnings from other communities and find ways to scale them for your own. For example, even though Alexandria is very different from Washington DC, they benefit greatly from the Washington DC Department of Transportation Vision Zero experiences. (Find lots of Vision Zero resources and case studies in our Resource Library)

Since its political leaders committed to the goal of zero traffic deaths by 2030, Bellevue has been developing its Vision Zero plan. The process has featured robust community engagement, data analysis, a focus on managing speed for safety and prioritizing a Safe Systems approach, including the use of predictive “near miss” analysis. Bellevue’s Vision Zero work is built on four core elements: data, leadership, partnerships, and culture. (Learn more about Bellevue’s Vision Zero efforts.)

As in Arlington, Bellevue’s work to build a positive traffic safety culture is focused both internally for city staff, and externally for the community. During the webinar, Franz Loewenherz, the city’s Principal Transportation Planner who leads the Vision Zero coordination, shared results from a survey, including a question asking whether people agree or disagree with that “deaths and injuries while traveling on Bellevue streets are preventable.” Notably, the survey responses revealed more community members agreed with the statement than city staff, which highlighted the opportunity for more internal promotion of Vision Zero principles. (See results of the March 2019 Public questionnaire and City Employee questionnaire)

One example is a recent training for city staff – called Words Matter – conducted by Barb Chamberlain of the Washington State Department of Transportation. (We also recommend her  one hour webinar training about the importance of communicating.)

Managing Speeds for Safety: Critical at Any Size

Bellevue’s Safe Systems approach to traffic safety rests on four pillars: Safe Speeds, Safe People, Safe Vehicles, and Safe Streets. As is increasingly the case in Vision Zero communities, Bellevue recognizes that supporting safe speeds is central to reaching zero. This includes many proven strategies, such as roadway design, appropriate speed limits, and the use of automated speed enforcement.

Their city website describes Bellevue’s use of photo enforcement in school zones. One case is highlighted, near Stevenson Elementary School, in which the addition of safety (speed deterring) cameras showed significant safety improvements. Between the years 1999 to 2007, the school had no active school speed zone and 85th percentile speeds were 37 mph. When the city set an active school speed zone with 20mph signs, the 85th percentile speeds dropped to 33 mph. Since the city began automated speed enforcement in 2009, the 85th percentile speeds at the school have lowered significantly to 24 mph. Bellevue has also added 60 radar feedback flashing signs citywide to deter speeding. 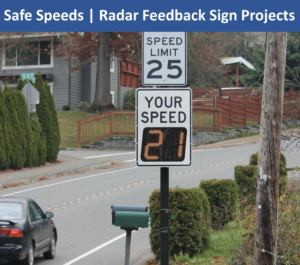 The city also emphasizes the importance of leveraging partnerships to achieve shared safety goals. Collaborators include transit agencies, the school district, the Washington Department of Transportation, and private companies. An example of the latter is its partnership with Brisk Synergies that enables the city to conduct conflict video-based analysis to plan projects and manage speed (Read more).

Vision Zero: A Strategy for Communities of All Sizes

Both Alexandria and Bellevue are proving that Vision Zero’s Safe Systems approach can, indeed, be applied in communities of all sizes and shapes and regions. Despite some misconceptions, this is not a big-city-only approach. In fact, when Vision Zero started 20 years ago in Sweden, the greatest focus in its early years was preventing auto-auto crashes on rural roads, and only later did the effort spread to urban areas. While the early-adopting Vision Zero communities in the U.S. have focused significantly on crashes involving people walking and bicycling, since they are so disproportionately impacted by injuries and fatalities, the Core Elements of Vision Zero remain the same.

And communities of all sizes can learn from each other, big or small. Many resources developed by the Vision Zero Network are available here, including guidelines to developing effective Vision Zero Action Plans, elevating equity in the work, and collaborating with diverse stakeholders, amongst others. In addition, the Vision Zero Network has showcased work from other smaller and mid-sized cities, including in Fremont, California (population 230,000); Durham, North Carolina (population 228,000); and Fort Lauderdale, Florida (population 179,000). And, check out our webinar showing other examples: Vision Zero 101 – Approach for Mid-Sized Cities.

If you find value in the resources provided by the Vision Zero Network, please support our work. Help us sustain our nonprofit activities boosting Vision Zero work across the nation.