Part 1: Use the Vaccine to Save Lives: What the U.S. Can Learn from the Global Vision Zero Movement

This is the first in a five-part series sharing perspectives from various participants in the 3rd Global Road Safety Conference in February 2020, which set the goal of halving traffic deaths globally in the next 10 years. You can read the full series and our webinar on the same topic here. 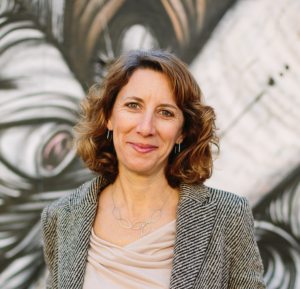 Leah Shahum is the founder and director of the Vision Zero Network, a nonprofit helping U.S. communities develop and share best practices for safe mobility for all road users. As a German Marshall Fund Fellow, Leah researched Vision Zero strategies in Sweden, Germany and the Netherlands. Before that, Leah ran the 10,000-member San Francisco Bicycle Coalition and served on the Boards of Directors of the Golden Gate Bridge, Highway & Transportation District and the San Francisco Municipal Transportation Agency.

There are many reminders of how interconnected our world is today, none as stark as the global pandemic we face. As of this writing, it is being reported that more than 30,000 people have died of the coronavirus worldwide in just the past few months. It is worrying, of course, that no vaccine has been identified to protect us against this new threat.

Meanwhile, each day 3,700 people lose their lives in preventable traffic crashes around the world — a long-standing health epidemic that kills 1.3 million people each year. For this well-known threat, we do have a vaccine, albeit one that is administered neither evenly nor effectively.

But that doesn’t have to be the case. Just as some communities are managing the coronavirus outbreak more effectively than others, some also prioritize roadway safety better than others. The difference results in life or death.

What can the U.S. Learn from Global Road Safety Leaders? 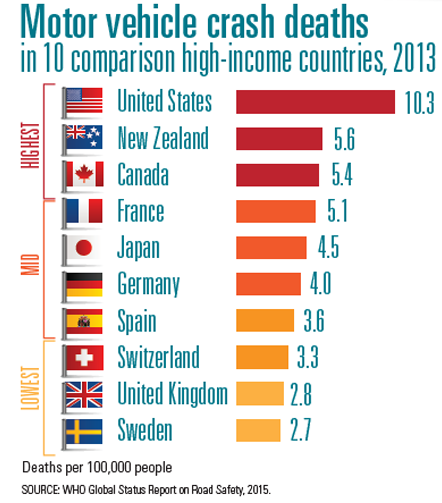 I was fortunate in early February to participate in the 3rd Global Road Safety Conference led by the World Health Organization, which convened 1,700 people from 140 nations in Stockholm, Sweden to spur action for Vision Zero. The official goal set – as memorialized in this Stockholm Declaration – calls for halving road traffic deaths worldwide by 2030 and reaching zero traffic deaths by 2050.

Is it ambitious? Of course. Is it possible? Yes. And, is there any other ethical response to one of the top preventable killers in the world and the leading cause of death for people between 5-29 years of age? Surely, the answer is no.

My greatest takeaway after hearing from the world’s leading road safety experts and practitioners from nearly every continent is that we already have the knowledge and the tools to stem traffic violence, but we must develop the political will to do so. We must shift from dangerous complacency and a mistaken belief that deaths and severe injuries are an unavoidable consequence of modern mobility. It’s simply not true.

So, how do we do this? We can build on two important examples of what’s working in the nations who are putting their minds – and political wills – toward real change, while also learning from our current experience with the coronavirus. First, trust the science and second, implement what works, even if those two things may be difficult to face.

Lesson 1: Trust the Science: Our bodies can only withstand so much in a crash.

This is a basic truth: The human body can only take so much impact before breaking.

How much kinetic energy the average human body can stand before breaking is a known scientific fact. (For the scientifically minded amongst you, apparently the amount of energy interchange can result in injury severity that is equal to one half of the vehicle mass multiplied by the square of the vehicle speed.) In easier-to-understand terms, if someone walking is hit by someone driving a vehicle traveling at less than 30 km/h (just under 20mph), the risk of bodily injury will likely be less than 10%, but this risk rises to about 50% if the vehicle is traveling at 45 km/h (just under 30mph). This is more extreme for both the frail and the young.

Using known strategies — see #2 below —  to reduce the transfer of kinetic energy when one thing hits another thing on the roads is a core tenet of the Safe Systems approach, which underlies Vision Zero, and which will be key to significantly reducing today’s epidemic of 1.3 million traffic deaths annually worldwide.

Lesson 2: Do What Works: Use the Vaccine to Save Lives

Most communities have designed their everyday transportation systems to largely ignore the scientific facts above. The reality is that we are making our environments more hazardous and unforgiving with bigger vehicles, faster-moving traffic, more space prioritized for car traffic and less for moving without an two-ton vehicle. Meanwhile, our bodies have not grown any stronger. (There’s a reason people inside vehicles have gotten relatively safer over time, while people outside cars are increasingly worse off.)

Fortunately, though, there are communities that recognize the facts and are putting systems into place by re-engineering roadways and policies to be what the Safe Systems approach calls more “forgiving.”

Most recently, the cities of Oslo and Helsinki showed us that zero is possible by implementing proven strategies. In 2019, both cities (each economically healthy and similar in population size to Washington, DC) touted the achievable distinction of zero deaths amongst people walking or biking and no transportation-related deaths amongst children.

How did they do it? Are Norwegian and Finnish bodies sturdier than others? Of course not. In fact, there is nothing magical about what they’re doing to advance safe mobility, including: reducing the number of car trips in key areas, thus reducing opportunities for serious physical conflict; effectively lowering speeds so that when people do crash, they survive; and separating car traffic from walking and biking movements wherever possible.

Countries including Sweden, Switzerland and the United Kingdom have reduced road traffic deaths by 80% or more from peak levels in the 1970s. Other recent promising examples exist in Bogota, Colombia and Mexico City, where traffic crashes and severity of crashes have been reduced significantly in the past few years as they’ve begun to embrace a Safe Systems approach. 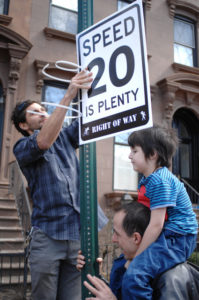 These communities are designing for survival. We could be, too. Much of the “how” is outlined in the Stockholm Declaration, which sets achievable actions for safety, including: setting lower speed limits in cities (“20 is plenty”), then re-designing and enforcing for this; building out priority space for walking, biking, and public transit trips to give safer alternatives; ensuring all fleets and delivery vehicles are top-notch models for safety; and more. (More and helpful details and guidance can be found in the Recommendations of the Academic Expert Group here and in this follow-up post.)

While the U.S. government, regrettably, did not endorse the Stockholm Declaration, there is ample room for others around the nation to do so. We cannot, and should not, wait for the promise of tomorrow’s technology to “save” us, as that may be decades in the making.

We call on local, regional and state leaders – as well as community groups and the for-profit sector — to join the global movement in stemming the ongoing epidemic of preventable traffic deaths and injuries. Together, we can refuse to accept human tragedies as the unavoidable consequences of modern mobility by implementing the proven strategies in the Stockholm Declaration. The future is in our hands.

This is part one in a five-part series sharing perspectives from various participants in the 3rd Global Road Safety Conference in February 2020, which set the goal of halving traffic deaths globally in the next 10 years. Read the full series here.