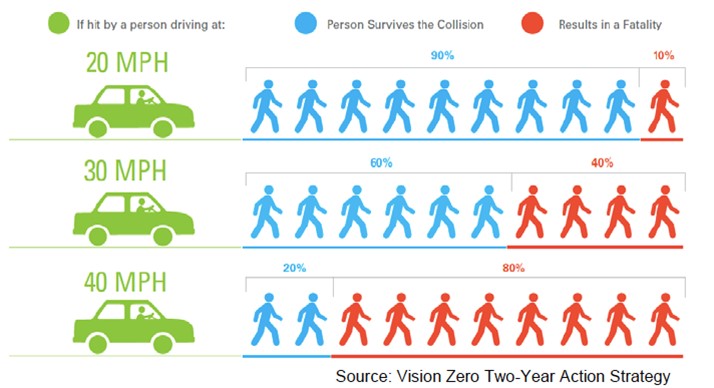 New data released by the Insurance Institute for Highway Safety (IIHS) affirms a key Vision Zero principle: lower speed limits increase road safety. Analyzing data following the City of Boston’s January 2017 drop in speed limit from 30 mph to 25 mph, IIHS concluded that lower speed limits do, in fact, reduce the speed at which people travel and “improve safety for all road users.” The study is believed to be the first U.S. study to measure the impact of a lower speed limit on traveling speeds in urban areas.

This analysis supports Vision Zero’s emphasis on speed management as one of the most important tools to save lives and reduce serious injuries on our roadways. It also provides community, public, agency and legislative stakeholders with further evidence in support of lower speed limits for their municipalities.

The study showed that in lowering its speed limits, Boston saw the greatest decline — a 29.3% reduction — in the odds of speeding for vehicles traveling faster than 35 mph. This is notable because it is at these higher speeds that crashes are most dangerous, especially for those walking. The faster a car is moving, the less time the driver has to see a pedestrian and slow down or stop and the higher the injury risk for the pedestrian.

Nationally, speed was recorded as a factor in 27% of fatal crashes resulting in 10,111 crash deaths in 2016, according to the study. Research has shown that the likelihood of pedestrians or bicyclists surviving impact with a vehicle increases significantly with each 5 mph decrease in the speed limit. Further highlighting the importance of lower travel speeds, researcher Eric Dumbaugh notes in a recent Vision Zero Network webinar on Safe Systems that 18mph is the human tolerance of crash impacts.

Researchers concluded in Boston that a speed limit of 25 mph led to the greatest reduction in vehicles exceeding 35 mph. This has profound and positive implications for improved safety on Boston’s streets.

Setting lower speeds is one of the most underused strategies in the Vision Zero toolkit, yet an effective one. Just a 5mph reduction reduces the severity and fatality of traffic crashes and saves lives. This evidence underlies Vision Zero Network’s advocacy for policies and engineering changes that slow down vehicles. It also is the crux of IIHS’s conclusions:

IIHS’ findings also bolster the Vision Zero Network’s — and many other groups’ — including the National Transportation Safety Board — urge for the U.S. Department of Transportation’s Federal Highway Administration (FHWA) to modernize the outdated 85% speed-setting standard, which has unintended consequences of higher, more dangerous speeds.

“Using only the 85th percentile speed to set speed limits on roads often ignores the design and function of the roadway,” says IIHS President David Harkey. “Crash statistics, road use by pedestrians and bicyclists, presence of driveways and intersections, and curvature of the road are all factors to consider when setting speed limits. Our new study shows that safety benefits can be gained when speed limits take into account all road users in an urban environment.”

The Vision Zero Network couldn’t agree more. We encourage more cities to follow the lead of Boston (and other Vision Zero cities, including, most recently, NYC, Seattle, and Portland) in lowering speed limits for the sake of safety.

We call on the FHWA and other influential national transportation entities, including the American Association of State Highway and Transportation Officials (AASHTO) and the National Committee on Uniform Traffic Control Devices (NCUTCD), to follow the recommendation issued by the National Transportation Safety Board in its speed study last year to evolve beyond the limiting 85% speed setting standard to one that takes a Safe Systems approach.

Read the full IIHS study here. The Vision Zero Network thanks IIHS and the City of Boston for this important work to prioritize Safety over Speed.