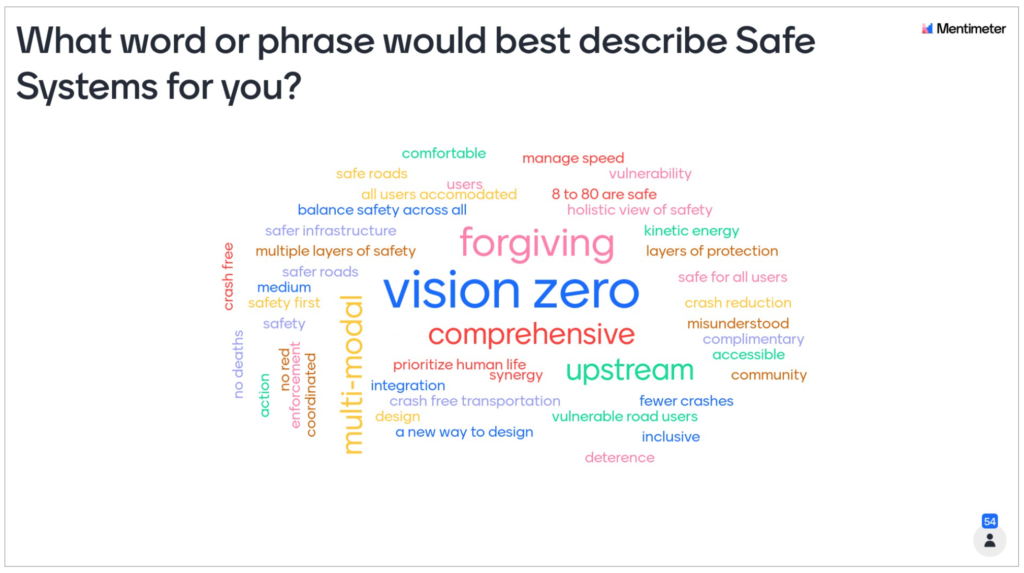 As interest in and support for Vision Zero grow across the U.S., it is an important time to make sure we’re clear on what Vision Zero really is. And what it is not.

Vision Zero is not a slogan. Not a tagline. Not just a “program.”

Simply put: If Zero is our goal for preventable traffic deaths and injuries, then Safe Systems is how we get there.

The Vision Zero Network and ITE brought together local, State, and Federal Vision Zero trailblazers for a discussion in February 2021 to delve into why the topic of Safe Systems is garnering so much attention lately.

Thanks to our webinar presenters, including:

“If we just keep doing what we’ve been doing, it’s not going to get us to where we want to be,” stated FHWA’s Mark Doctor at the start of the discussion.

So true. And this is really at the heart of the fast-growing Vision Zero movement in the U.S., including more than 45 communities committing.

We could look at the painful rise in traffic deaths — including newly released figures for 2020 showing a shocking 8% increase of people killed overall and 24% increase in the traffic death rate — and throw up our hands in defeat. Or, we could look at what is working in other nations around the world — and in some microcosms within the U.S. — and be willing to make changes to double-down on what works. For example, as part of Minneapolis’ Vision Zero commitment, they have lowered speed limits for safety as part of a broader approach that also addresses road design, education, communication, and automated speed enforcement to make streets safer.

While zero may seem like a long way off in the U.S., Doctor explains, Safe Systems is a new direction, a new way of tackling the problem, that has proven effective in saving lives and significantly reducing traffic deaths in other nations.

“Safe Systems is fundamentally a different way of looking at the problem, and once we see things differently, it allows us to look for solutions a little differently,” he explains.

What is Safe Systems & Why Does it Matter?

So, what is different about Safe Systems?

Fundamentally, the core difference is that Safe Systems is based on a human level — aiming for safety for people above all else and accommodating the reality that humans make mistakes. On the roadways, these mistakes may lead to crashes. Trying to prevent severe crashes altogether and minimizing severity of crashes, overall, are key.

The Safe Systems approach addresses the systems, policies, and physical environment — such as the design of the roads, vehicles, and speeds —  in a way that when those inevitable crashes occur, the outcome is not fatalities and serious injuries.

“It’s about managing the system to keep the consequences such that the human being can survive those inevitable crashes that will occur,” Doctor explains.

How do we manage the system in this way? This includes prioritizing human-centered designs and managing speeds for safety first. An example (see image below) includes replacing a 4-way intersection with a roundabout, or traffic circle. This design change — relatively simple but profound — effectively slows most drivers down, so that they can move thru the intersection safely. Even for those who do not slow down and barrel thru the intersection at an unsafe speed or without yielding, the angle of impact of a crash is less severe and more survivable. 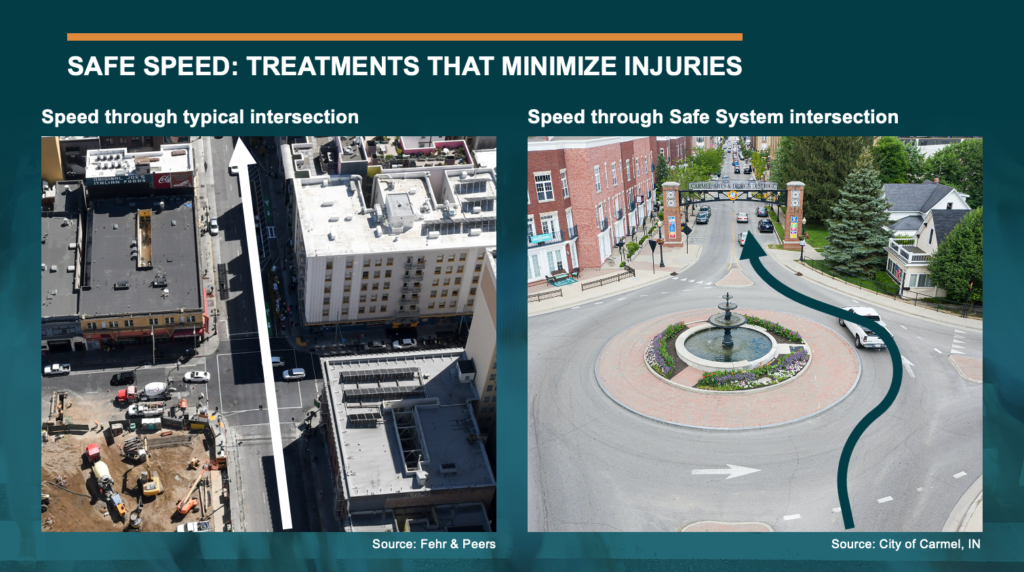 Much of the success of the Safe Systems approach in other countries rests on their willingness to manage speed for safety, which comes down to understanding kinetic energy. As kinetic energy increases, so does the probability of crashes and the severity of those crashes. So, if you lower the kinetic energy — especially amongst differently sized road users (person walking vs. person driving an SUV) — then you lower the chance of & severity of crashes. It’s actually pretty simple. And we have lots of strategies to reduce kinetic energy that we are not utilizing nearly enough, including traffic calming designs, reduced speed limits, increased transit/walking/biking, and safety cameras.

Another difference in the Safe Systems approach compared to the traditional approach, Doctor explains, is being proactive rather than reactive. This means moving beyond addressing hot spots retroactively (ex: Where were people killed in the past? Address those individual locations). A true Safe Systems approach identifies the risks in the system (not just the individual locations) based on certain features of designs and behavior across the system. Then, solutions are rolled out to proactively improve locations that may never have experienced direct safety problems but share the characteristics of those that have, so problems are being headed off before they happen. (Examples from Seattle & NYC)

Learn more about FHWA’s work developing and promoting the Safe Systems approach here. And please share these resources with your community’s planners, engineers, and policymakers. If it’s good enough for FHWA, it should be good enough for your city, region, and State!

Pivoting to Safe Systems in California

The new approach being encouraged by FHWA and others around the U.S. is picking up steam, including in the nation’s largest state. California’s Department of Transportation (Caltrans) is leading the way, along with its partner agencies, by pivoting from its prior approach to an official Safe Systems framework.

As with many transportation leaders around the nation, those in California are recognizing the need for change as the number of traffic deaths climbs, particularly amongst our most vulnerable, people walking and biking, and kids and seniors.

Like most agencies around the nation, Caltrans has long prioritized safety. With this “pivot,” they are significantly increasing the sense of urgency and lining up actions and resources to make change. This includes a visible and high-level commitment to four pillars, as listed below.

They are working now to lead a safety culture change both internally, within their own and other related departments, as well as externally. This includes taking steps to institutionalize safety at all levels – from speed management practices, to funding decisions, to how local development efforts are evaluated.

The pivot to Safe Systems also includes changing the conversations about traffic safety, Carpenter explains. Examples include shifting language from “accident” to “crash” to reflect that there are identifiable reasons for crashes and that most are preventable. Language matters in how we view problems (impossible to change? or something we have agency over?) and how we design solutions.

Another example is not depending on “human error” so heavily as the “cause” of crashes, as is often done based on an oft-cited (but misleading) national statistic that 94% of crashes are due to human error.

And, she continues, “this statement implicitly holds humans to an impossible standard. In reality, humans are not perfect. We make mistakes, and mistakes don’t have to result in death and serious injuries.”

“Instead, we can design for and accommodate mistakes by changing the system, including street design, vehicle speeds to make it safer… In changing the conversation, we want to emphasize that we should change the transportation system to be safer, instead of trying to change human behavior.”

While California is just starting down the Safe Systems path and much work needs to be done, strong leadership is making this pivot quite promising, as evidenced by specific program examples shared during the webinar.

“In California, we are pursuing a paradigm shift in safety,” says Carpenter. “It’s a deliberate change that seeks to elevate and institutionalize safety at all levels. If we want to reduce death and serious injuries, we need to change the way we do things.”

The City of Philadelphia first committed to Vision Zero in 2017, and recently updated their original with a new Action Plan with a broader systemic basis, embracing the Safe Systems approach.

Philadelphia has one of the highest rates of traffic deaths amongst U.S. cities, with an average of 85 people killed each year, and five children involved in traffic crashes every day. In 2020, they saw almost an 80% increase in traffic crash deaths.

The City’s Vision Zero program lead and Complete Streets Director, Kelley Yemen, explained the tragic increase as a “shock” that made the commitment to Vision Zero and Safe Systems even more urgent. The focus of the updated plan and priorities is moving toward a “more forgiving transportation system” for all people.

Examples of strategic actions aligned with Safe Systems include a stronger focus on managing speeds for safety in a variety of ways, recognizing that managing kinetic energy on our roadways is keys to avoiding severe crashes, or at least significantly lessening crash severity.

Transformative policies include expanding speed safety cameras to address dangerous travel; breaking free of the traditional 85%-percentile approach to speed-setting and instead using a Safe Systems approach; gaining flexibility from the State for street designs for safety improvements; and institutionalizing Vision Zero, to ensure continuity.

Notably, Philadelphia’s previous Vision Zero plan rested on the traditional “E’s” as most traffic safety plans have for decades. But this new plan recognizes the benefit of shifting from the E’s to a Safe Systems approach that is less siloed and recognizes that all of the E’s are not created equal.

While they kept one “E” — Equity — as a pillar in their Vision Zero work, they also recognized the need to shift to Safe Systems to make their efforts  more integrated and effective. 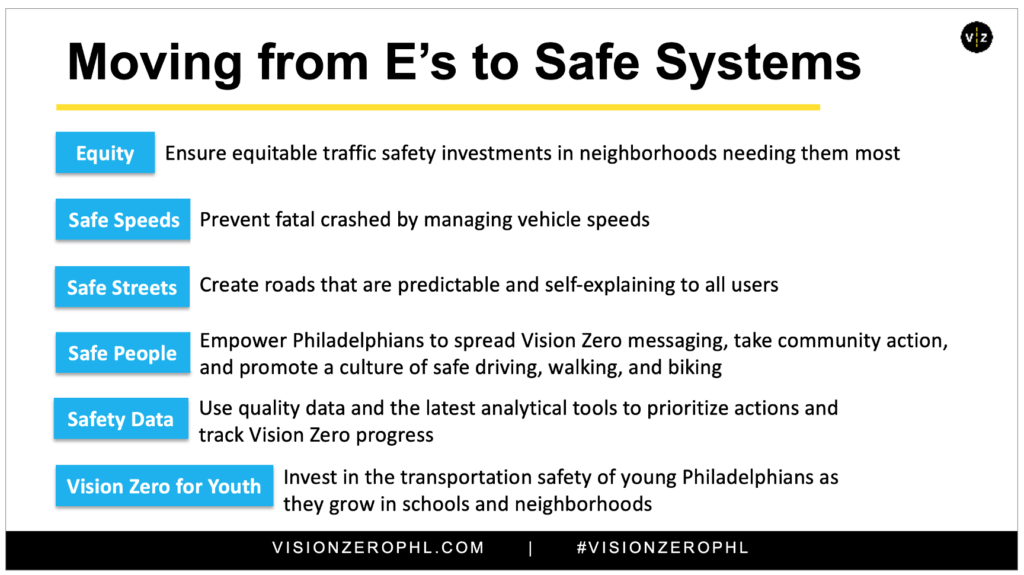 For example, Philadelphia’s “Safe People” work is focused not only on educating people using the streets to “be safe” as the traditional “E” of Education is. Instead, Yemen, explains: “We’re  working on empowering Philadelphians to talk about Vision Zero and take ownership of their streets, to feel empowered to advocate and ask for safer streets, driving, walking, biking, and transit environments.”

The Safe Systems approach, which moves past the “E’s” foundation encourages a more effective and equitable set of strategies and outcomes. For instance, Philadelphia’s work is focusing more on re-designing streets to be self-enforcing, or forgiving, with traffic calming street designs, and speed safety cameras, both of which can take the place of police-led traffic stops.

The new Vision Zero Action plan highlights that, as in many cities, serious traffic crashes are not evenly distributed, but rather are disproportionately harming communities of color and low-income residents. In Philadelphia, fatal and serious injury crashes are three-times more likely to occur in areas where most residents are low-income. And they are 30% more likely to occur where most residents are people of color. 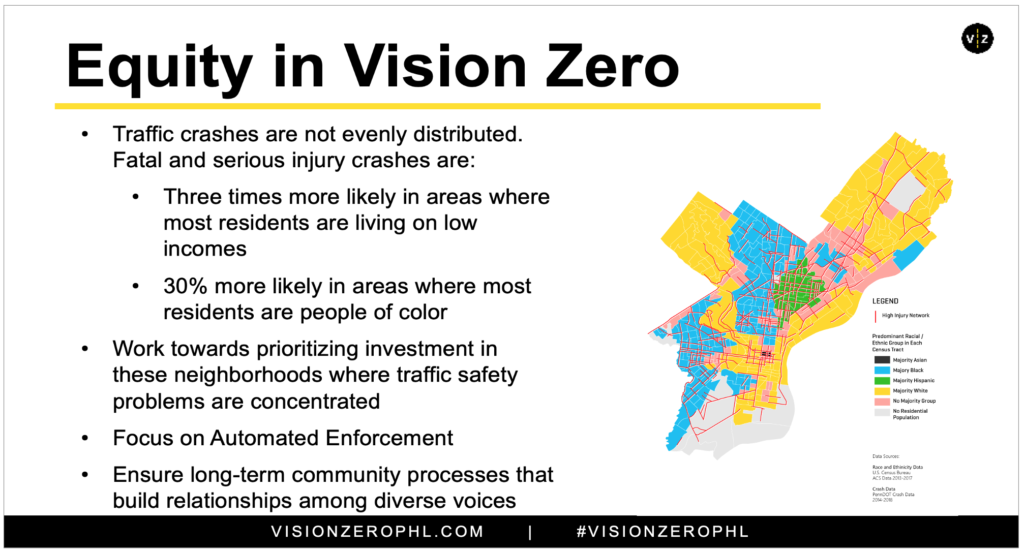 Another troubling — though not uncommon — finding is that 80% of Philadelphia’s traffic deaths and serious injuries are occurring on just 12% of its streets. While these inequities unjust and harmful, the power of shining a light on them is motivating much-needed change. For example, as in Philadelphia, Vision Zero cities across the country recognize and are acting on the need to invest more for safety in those communities that have been disproportionately less safe for too long.

The City of Philadelphia’s and the State of California’s pivots to the Safe Systems approach will probably not be quick nor perfect. But these are important starts. They should be commended and supported for recognizing that the status quo is not adequate and that fundamental change is needed.

As the FHWA’s Mark Doctor shared, “If we just keep doing what we’ve been doing, it’s not going to get us to where we want to be.”

And we can all agree we want to be in places that are safe to move around — for everyone. The path to Vision Zero is implementing the Safe Systems approach.