A recent report from the Governor’s Highway Safety Association (GHSA) documenting an unprecedented increase in traffic deaths among people walking was alarming enough. But to see widespread news coverage demeaning the seriousness of this issue by dumbing down the problem to one of too many pedestrians using cell phones was downright unsettling. 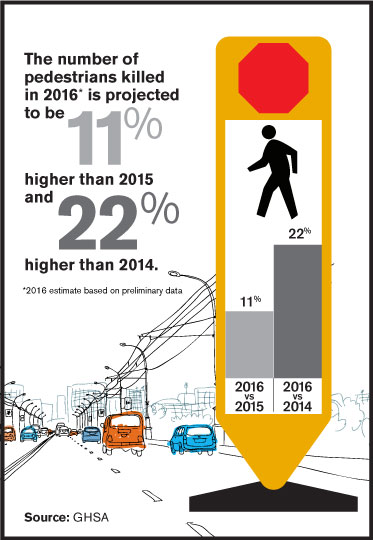 The GHSA’s  March 30th ‘Spotlight on Highway Safety’ report estimates that 11% more people were killed while walking in the U.S. in 2016 than 2015. According to GHSA, this is the most extreme year-to-year increase in 40 years. And sadly the carnage can’t be dismissed as a single year anomaly; compared to 2014, the number of pedestrian deaths in 2016 rose 22%.

We appreciate GHSA’s work in highlighting this urgent public health crisis. We’re heartened that professionals and community leaders of all stripes recognize the complexity and severity of the problem and are working to develop real answers. But we continue to be deeply disappointed  by media coverage that masks the serious, underlying problems – and solutions – by misallocating blame and failing to address the systemic designs and policies that result in an appalling number of avoidable deaths in America.

While we agree that phone distraction is a real problem and one that deserves attention (and by that, we mean meaningful action from industry and government leaders, not just words), this should not cover up the far more dangerous  – and fixable – challenges that existed even before attention-grabbing smartphones became ubiquitous.

Focus on the Real, Underlying Problems – and Solutions

The unacceptably high number of pedestrian deaths are the result of ongoing – and addressable – predicaments of roadways designed for unsafe speeds; city streets whose outdated designs fail to meet the needs of their modern multi-modal users; arcane state laws preventing local municipalities from using proven strategies such as safety cameras and speed limit adjustments to encourage appropriate speeds; and a general apathy toward an epic societal problem. The fact that an average of 100 people lose their lives each day in this nation because policymakers are more worried about short-term political pushback than long-term, meaningful investments in safety and health is appalling.

We agree with the report’s author, Richard Retting, who said upon its release: “It is critical that the highway safety community understand these disturbing statistics and work to aggressively implement effective countermeasures.”

Media play a critical role in shaping the context of the conversation, and a problem this big demands a rational, evidence-based response. The story the media should be telling in light of this startling news of 6,000 people killed annually while walking is that those deaths were not random, unpreventable acts. Known solutions exist to protect the lives of people trying to move around their communities. But, in many cases, decision makers, their constituents, and media that inform their perspectives are ignoring, blocking, or even acting directly against the evidence and, instead, prioritizing speed over safety. A disturbing case in point: Six states now have maximum speed limits of 80 miles per hour, and Texas allows speeds as high as 85 mph, despite plentiful evidence showing increases in speed limits result in more deaths. (For more on this, see reports from the Insurance Institute for Highway Safety and Advocates for Highway & Auto Safety.)

We see a newsworthy report like this every few months. Some people get agitated for a news cycle or two, then things go back to business as usual, and tens of thousands of people die needlessly on our streets.

Fortunately, many local leaders are changing the narrative by digging into the data to understand what’s happening where and why and when and to whom. Armed with facts and more nuanced understanding of the problem,  Vision Zero leaders are able to boldly address the factors that actually influence behavior on the roads, rather than lazily assuming cell phones and poor walking skills are the culprits. This leads to better analysis and, in some cases, much-needed challenges to long-held assumptions about factors such as street design, speeds, and policies that influence traffic culture. By committing to Vision Zero, these city and community leaders are acknowledging that these traffic deaths are preventable and taking action.

One “bright spot” in this news is that the biggest cities in the U.S. are doing far better than the rest of the nation in prioritizing its walking public. The report finds that the 10 most populous cities had a 3.5% decrease in the number of pedestrian fatalities between 2014 and 2015, which are the most recent data available. This compares with the nearly 10% increase nationwide during that time frame. It’s no coincidence that Vision Zero has been championed primarily by larger urban areas in its early adoption in the U.S. But safety is not only a big city issue: the tools and strategies employed by big cities to cut deaths can be adapted to small towns, suburbs, and rural communities so that the whole country can experience a decline in traffic deaths. It’s not rocket science; it’s about prioritizing people-first policies over speed at all costs.

Though the media coverage may be demoralizing and falsely implies the inevitability of growing traffic deaths, there is a lot more that can – and must – be done to ensure safe mobility for all people on the streets.

If you’re upset by the news in the report and troubled by the way it is being reported (including too much victim-blaming and too little attention toward the systemic problems and solutions), here are some ways you can take action:

Previous StoryMoving from Vision to Action: What Will it Take to Reach Vision Zero?
Next StoryCentering equity in Vision Zero