Reducing speed to save lives and eliminate life altering injuries is a cornerstone of Vision Zero. Unlike the traditional approach, Vision Zero brings a safe systems approach to transportation planning, priorities, and implementation. A safe systems approach recognizes that humans are going to make mistakes, and seeks to design a system that allows for these mistakes, rather than expecting perfect behavior to minimize death and injury.

Vision Zero calls on cities to manage safe speeds for everyone, whether they are driving, walking, or bicycling. Safe speeds are especially important to help protect the most vulnerable on the road, and the difference of just 5 or 10 miles an hour can literally mean life or death in a crash.

More than 10,000 people lose their lives each year in speeding related crashes, accounting for ⅓ of all traffic crashes across the United States. We know what works to improve safety on our roadways, but a lack of national leadership and on-the-ground action has allowed thousands more lives to be lost each year.

We commend the work of the National Transportation Safety Board, the nation’s leading authority on crashes and prevention strategies, and its landmark study, published in August 2017, for recognizing the deadly problem of speed and calling for action to dramatically reduce speed-related deaths and injuries.

The study calls the problem of speed underestimated and underappreciated, and explicitly emphasizes the need for reform of outdated practices and policies, including allowing greater local control of managing speed. Read our response to the study, which includes details on study recommendations and findings here.

Three strategies are proven to be particularly effective in managing safe speeds.

Street design is one of the single-most important strategies to slow speeds and make streets safe for everyone. Design techniques like roundabouts, speed humps, medians, and road diets are all proven solutions to slowing speeds and making streets safe.

Safe street design is the foundation for a Safe Systems approach. We simply cannot educate or enforce our way out of traffic safety problems. Cities must build a foundation of streets, sidewalks, and bikeways that prioritize safety over speed.

Streets with these designs are also referred to as Complete Streets, to accommodate everyone on the road, whether they are walking, bicycling, or taking transit. The National Complete Streets Coalition has a wealth of resources on this subject and how Complete Streets can help to build complete neighborhoods.

The National Association of City Transportation Officials (NACTO) has published a suite of design guides that provide excellent illustrations of design choices.

However, because of restrictive state policies, only 14 states and Washington, D.C. 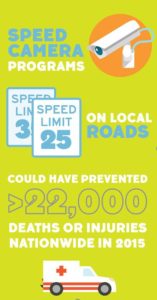 currently allow for these cameras. NTSB’s study calls for states and local cities to authorize the use of automated speed enforcement because of the highly effective nature of the cameras to curb speeding.

The Insurance Institute for Highway Safety (IIHS), estimates that if all U.S. communities had speed camera programs like one in Montgomery County, MD, established in 2007, more than 22,000 fatal or incapacitating injuries would have been prevented on 25-35 mph roads nationwide in 2015.

NTSB recommends in its study that states amend laws and authorize state and local agencies to use and promote use of automated speed enforcement.

NTSB’s study recognizes that today’s standards for setting speed limits are, in many cases, outdated and ineffective.

Most states rely on the 85th percentile standard to set speed limits. This policy emerged as early as the 1940s and is based on the assumption that the majority of drivers can operate at reasonable speeds according to weather conditions, traffic, road geometry, and other factors. Yet, this viewpoint means that drivers set the speed limit.

Currently, speed limits on many roads are controlled by the state. If a city wants to lower the speed limit on local roads, many are forced to laboriously move state legislation to make the change. We commend cities like Portland, Seattle, New York City, and Boston — all Vision Zero cities — for working on legislative change to lower speed limits for the sake of safety.