Acknowledgment that Zero is Right Goal Grows at National Level

If someone had asked me five years ago what the chances were of people in the U.S. taking seriously the goal of reaching zero traffic deaths in my lifetime, I would have, reluctantly, responded: That’s a nice thought, but I can’t imagine it happening in today’s culture in our country. 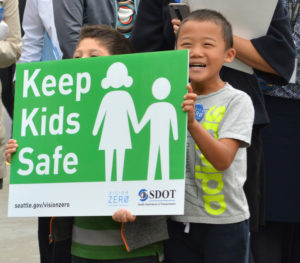 Well, I’m so pleased to be proven wrong.

Today, in communities across the country, mayors, transportation and public health professionals, police chiefs, and community leaders are publicly declaring that zero is the only appropriate goal to set when it comes to safety on our streets, sidewalks, and bikeways.

More than 20 U.S. cities have set explicit Vision Zero goals – a seismic shift in acknowledging that the average 100 traffic deaths each day in this nation (and far more injuries) are preventable. Through a combination of political courage, community advocacy, smart policies, proven roadway redesigns, and emphasis on safety over speed, work grounded at the local level will allow the U.S. to follow in other nation’s footsteps of dramatically reducing traffic deaths on our way to the goal of zero. 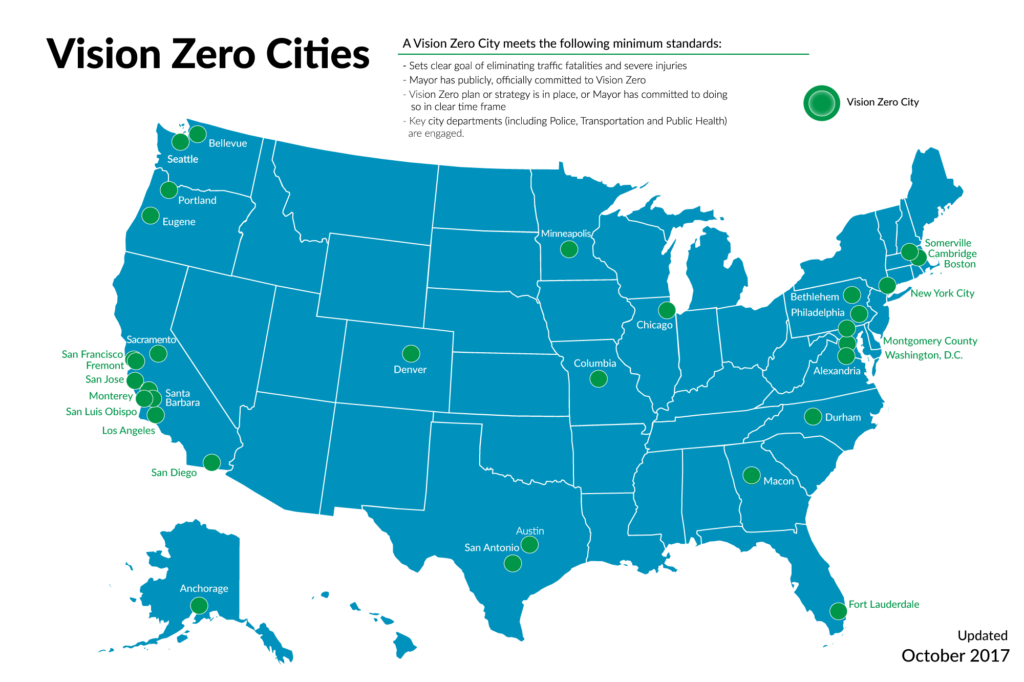 New National Leadership on the Road to Zero

Change is happening not only at the local level but at the national level, too.

This month marks the one-year anniversary of the Road to Zero initiative, an ambitious and critically important national effort to eliminate traffic fatalities in the U.S. within 30 years. Led by the National Safety Council, in partnership with the National Highway Traffic Safety Administration, the Federal Highway Administration, and the Federal Motor Carrier Safety Administration, the Road to Zero coalition has grown to include nearly 400 member groups. The Vision Zero Network is proud to be a member of the coalition as well as the Steering Group, and we helped celebrate the one-year anniversary with colleagues in Washington, D.C. last week.

As we wrote last year when the Initiative launched, this level of problem acknowledgement and ambitious goal setting is unprecedented in mainstream national policy.

It’s particularly encouraging to see national leaders embrace an approach to traffic safety that recognizes we have not only an ethical responsibility to work toward the goal of zero deaths, but also that these tragedies are preventable with the right approach.

Another example of much-needed, stepped-up leadership at the national level is the National Transportation Safety Board’s recently released Speed Study, which lays out compelling findings and clear recommendations for how local, state, and federal government can better manage the deadly problem of speed.

Several aspects of the Road to Zero initiative’s work can be celebrated a year into its existence, including:

1.) Convening and growing a broad coalition of organizations with interests including public health, safety, roadway design and more, and committing to the goal of zero traffic deaths.

3.) Developing a strategy to guide long-term work toward zero traffic deaths, created with broad stakeholder input on policies, technological advances, and systems change (to be released in 2018).

Much Work on Road Ahead

Given that the national trend is moving dangerously in the other direction, as NHTSA recently announced a 5% increase last year over 2016 – the work of the Road to Zero initiative cannot ramp up too soon. We must turn up the urgency on the public health crisis of traffic deaths threatening all of us, particularly those walking and bicycling, and children, seniors, low-income people, and communities of color.

We will not reach our destination on the Road to Zero if we do not address some of the most significant hurdles to safety for all. Many of these are more challenging on the political front, than practical or technical. We will need even stronger community advocacy and brave action from policymakers and professionals, particularly when it comes to prioritizing safety over speed and redesigning streets to be welcoming for all road users.

At the Vision Zero Network, we look forward to continuing our efforts to promote Vision Zero and its safe systems approach, as well as helping communities in the following two priority areas: (1) effectively managing speed for safety and (2) centering equity in Vision Zero efforts. We welcome partners who share the goal of safe mobility for all, and we are particularly eager to find effective ways for state and federal partners to support the promising work happening in Vision Zero cities across the nation.