Road to Zero Report Offers Strategies to Save Lives

Once thought quixotic, the goal of zero traffic deaths — already being pursued in dozens of early-adopting Vision Zero communities in the United States — was embraced today at the national level with the release of a groundbreaking report setting a goal to eliminate traffic fatalities by 2050.

The report, The Road to Zero: A vision for achieving zero roadway deaths by 2050, 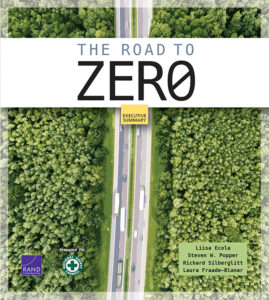 is the first of its kind in the U.S. and was developed by the RAND Corporation, a nonprofit, nonpartisan research institution, in partnership with the Road to Zero Coalition, which is led by the National Safety Council and includes the U.S. Department of Transportation, amongst other influential partners.

This historic call for action and urgency comes as traffic deaths reach staggering proportions, as more than 37,000 people lost their lives last year in traffic crashes in the U.S. – on par with the number of deaths related to gun violence and the opioid crisis. Unbeknownst to most, traffic deaths are one of the leading causes of preventable deaths in the nation, and the leading cause of death for young people ages 15-24.

“News flash: these deaths are preventable.”

“News flash: these deaths are preventable,” says Leah Shahum, Executive Director of the national Vision Zero Network, a member of the Road to Zero Coalition Steering Committee. “This report reinforces that 100 people losing their lives each day — children, parents, grandparents, and other loved ones — is not some inevitable ‘price’ for mobility. The truth is that we know what works to ensure safety on our streets, sidewalks, and bikeways. And we can and must work toward the only acceptable goal of zero traffic deaths.”

Recommendations to Save Lives

The report’s recommendations include:

(1) Instituting a Safe Systems approach, a core principle of Vision Zero, which recognizes that because human error is inevitable, system designers and policymakers must design roadways, policies, and systems to prioritize safety. (More below on the Safe Systems approach);

(2) More robustly implementing known, proven safety strategies, such as designing Complete Streets for all road users, and managing speed for safety by lowering speed limits and using technology to influence safe behavior; and

“We demand 100 percent safe operations in aviation, marine, pipeline, rail and transit, we should cultivate a corresponding societal demand for safe roads,” said Deborah A.P. Hersman, President and CEO of the National Safety Council. “With these three guidelines, everyone can do something to reduce fatalities on the roadway. Getting to zero fatalities is not impossible – it just hasn’t been done yet.” 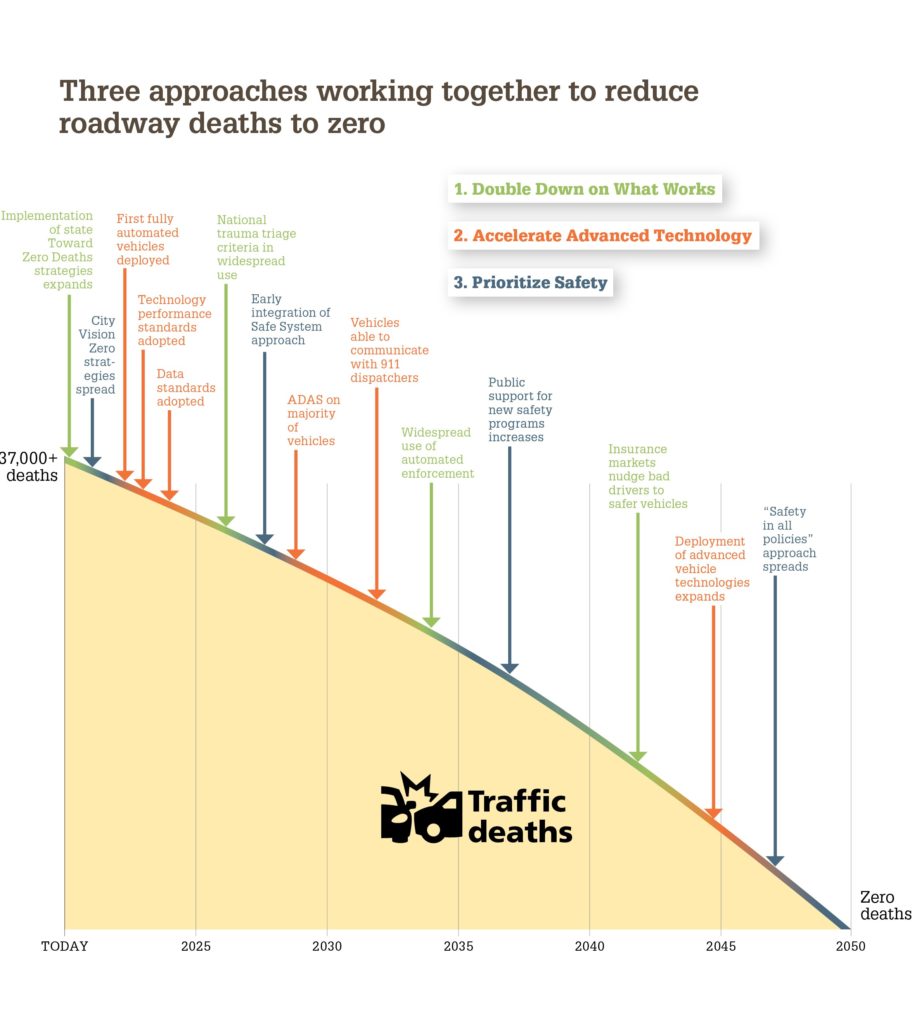 This nationally focused report reinforces the emerging leadership of more than 30 U.S. communities that have already committed to Vision Zero during the past four years – ranging from San Antonio, Texas to Fort Lauderdale, Florida to Durham, North Carolina to Los Angeles, California (see map of Vision Zero cities here).

The two longest-running Vision Zero communities in the nation have seen marked success in their efforts to save lives. Since New York City shifted its approach to Vision Zero in 2014, it has experienced a 28% decrease in traffic deaths. In that same time period, San Francisco’s Vision Zero efforts contributed to a decrease of 41% in traffic deaths (more here). These positive safety trends are especially encouraging as the nation’s overall safety worsened significantly.

“Vision Zero cities should feel proud to be leading the way in prioritizing safety over speed for its community members,” says Leah Shahum, of the Vision Zero Network. “This report endorses Vision Zero’s approach to invest in roadway designs — such as Complete Streets — and proven policies — — such as managing speeds for safety — that accommodate all road users safely, whether driving, walking, biking, or riding transit.

Examples of promising Vision Zero work across the country include:

+ Cities such as San Francisco, California and Denver, Colorado identifying streets with the highest concentration of crashes and focusing limited resources on top safety priorities;

“As someone who lost my son to a traffic crash, I’m encouraged to see leaders step up to the call for action and urgency to end this preventable loss on our streets, says Alvin Lester, whose son Arman was killed in 2014 in San Francisco. “Everyone deserves to be safe whether they’re walking to school, driving to work, or biking to the park. The only goal we can accept is zero traffic deaths, and we can get there.”

The basis of Vision Zero is the Safe Systems approach, which the new Road to Zero report calls “a powerful tool for achieving the changes needed to reach zero roadway deaths.” Vision Zero, which started in 2014 in the U.S., first began 20 years ago in Sweden, where traffic deaths have since been cut in half.

Vision Zero is not a simple slogan, and it is far more than a ‘program’. As the report explains: “Vision Zero begins with a commitment to focus on the changes necessary to eliminate roadway deaths rather than being satisfied with incremental progress, and goes on to include the creation of a transportation system that accommodates predictable human error without resulting in roadway deaths.”

The report goes on to explain: “Adopting the Safe System approach involves a fundamental shift from the common assumption that crashes generally happen because of people’s behavior. Instead, a Safe System approach assumes that people will occasionally, but inevitably, make mistakes behind the wheel and that the overall transportation system should be designed to be forgiving so that these mistakes do not lead to fatal outcomes. The Safe System approach also involves commitment to analyze safety problems, identify changes that bring the best return on investment, and implement these improvements throughout the system to prevent further occurrences. “

The new national report asks another question in response: “What level of death on the roads should we as a society accept?” How many of our own family members, classmates, neighbors, or people in our community losing their lives to crashes would be considered an appropriate number?“

Check out Additional Coverage of the Report:

To learn more about the Road to Zero Coalition and the new Road to Zero report, contact the National Safety Council (nsc.org/roadtozero).