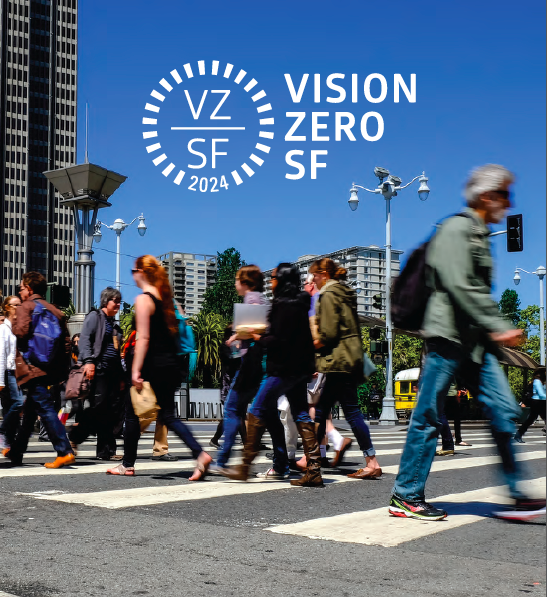 In the waning moments of 2013, as many Bay Area revelers prepared to ring in the New Year, six-year-old Sofia Liu was struck and killed by an Uber while crossing the street in San Francisco. It marked the end of a particularly fatal year for bicyclists and pedestrians — and the start of a mobilization for a new vision.

Each year 200 people are injured and 30 killed on San Francisco’s streets. In 2013 alone, 21 pedestrians and four bicyclists were victims of lethal traffic crimes – including six year-old Liu and an 86-year-old man, both of whom were killed in a crosswalk.

Deeply moved and galvanized by the highest death toll since 2007, the leaders of the San Francisco Bicycle Coalition and Walk SF came to together, united by a shared urgency to quicken the pace of change and radically redraw the debate around street safety. Seeing the proven results of Vision Zero in Europe and the early progress in New York City, advocates won support from city officials in relatively quick order.

Within six months, Mayor Edwin Lee and the Board of Supervisors had made a public commitment to Vision Zero: to eliminate all traffic deaths in San Francisco by 2024.

“The momentum for Vision Zero in 2014 was incredible,” Nicole Schneider, Executive Director of Walk San Francisco, said in a February press release. “City Hall and department leaders came together around this ambitious goal because they understand that it’s actually achievable: that traffic deaths are preventable.”

And it wasn’t just city leaders who came together. In its first year, the highlight and hallmark of the Vision Zero campaign was the unprecedented way it brought together diverse stakeholders.

“Traffic deaths and serious injuries affect everyone,” says Tyler Frisbee, Policy Director at the San Francisco Bicycle Coalition. “That’s why, from the start, our work to bring Vision Zero to San Francisco focused on engaging a wide range of community groups across the city. Within weeks, more than a dozen local organizations joined the nascent Vision Zero Coalition.”

“Together, the diverse Vision Zero Coalition has been able to demonstrate broad support for city leaders to take action — plus provide a comprehensive argument for safe streets in terms of health, social justice, and economic development benefits in meetings with city officials, as well as in the media,” she adds. “The Coalition has been especially important in amplifying the voice of organizations who work with San Francisco’s most vulnerable communities – low-income residents, seniors, people living with disabilities, and children. A little more than a year since its inception, it’s grown to 40 community groups who are working together to have greater leverage in holding the City accountable to action and make sure Vision Zero is part of our civic conversation.”

In February, the Coalition released “Where San Francisco Stands in Achieving Vision Zero.” According to the one-year progress report, the city has made early, but significant, strides.

– The San Francisco Municipal Transportation Agency committed to 24 infrastructure projects within 24 months on high injury corridors — and to establishing a crisis intervention team to survey and evaluate the location of crashes, and make engineering suggestions to immediately improve safety.

– Understanding that the five dangerous traffic behaviors most likely to result in serious injury or death include speeding, red light running, failure to yield, unsafe turning behavior, and not stopping at stop signs, the San Francisco Police Department created “Focus on the Five” to prioritize enforcement around these behaviors along the most dangerous streets in each police district.

– The Planning Department implemented the Better Streets Plan checklist to review private development projects, and the Street Design Advisory Team (SDAT) to review streetscape plans and, to the greatest extent feasible, include pedestrian and bicycle safety improvements on identified high-injury corridors and intersections.

That same month, the city released its Vision Zero Action Plan, with strategies and benchmarks for progress in five areas: Engineering, Enforcement, Education, Evaluation and Policy. Like other cities, San Francisco has zeroed in on retrofitting high-crash corridors, reducing dangerous traffic violations like speeding, and creating better means of collecting and analyzing data.

And, like the Vision Zero Coalition, the Action Plan also calls out the need to address social equity. 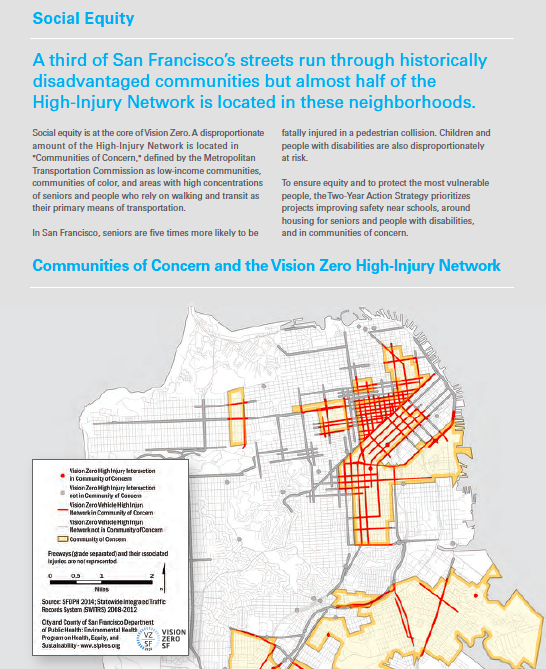 “The communities most likely to be injured in traffic are our low-income communities, communities of color, and seniors — the same people that rely most on walking and transit to get around,” said Angelina Yu of Chinatown Community Development Center, a member of the Vision Zero Coalition. “Improvements must be prioritized in these same communities in order to achieve transportation justice.”

So what’s next in San Francisco? The Vision Zero Coalition identified three top priorities to move forward in 2015 — with the urgency incumbent in saving lives.

– Expedite implementation of at least 18 miles of street safety improvements on the city’s high-injury corridors, and prioritize locations in communities of concern.

– Advocate for a change in state laws to allow for more effective enforcement of illegal and dangerous speeding behavior, including the use of automated speed enforcement which has decreased speeding in places like London by up to 70%.

– Focus enforcement on the five most dangerous traffic behaviors and locations — and ensure the SF Police Department increases the percentage of all “Focus on the Five” citations to at least 37% in 2015 and 50% in 2016.

“With just nine years remaining to reach the ambitious Vision Zero goal, no time can be wasted. San Francisco must move rapidly to redesign our most dangerous streets, encourage safe behaviors on the roads, and ensure that traffic enforcement focuses on creating a culture of safety,” the report concludes. “The public mandate and funding exist to both make these changes a reality — and to make our city a model for the nation.”

Previous StoryFrom Seattle to Boston: The Momentum for Vision Zero Nationwide
Next StorySan Jose: Widening the Lens on Vision Zero