From Intersections to High Injury Corridors: How Data Can Focus Vision Zero Efforts

The Vision Zero Network, as part of its efforts to ensure meaningful Vision Zero commitments among communities in the U.S., recently hosted a webinar with leaders from San Francisco to share their experience in creating a High Injury Network, or the mapping of local corridors where high numbers of people have been killed and severely injured. San Francisco, through the robust participation of its Public Health Department, was the first city to create such a resource, and since then, several cities have followed suit creating a new trend in Vision Zero across the U.S.

In the webinar, San Francisco leaders from the Public Health Department and Transportation Development Agency share how and why the HIN was created, and even more importantly, how the HIN is helping the City prioritize investments in safe street projects, education, and enforcement. In short, the HIN has helped San Francisco focus its Vision Zero efforts in meaningful ways to literally save lives and reduce harm.

See below for a recording of the webinar, and scroll further down to read excerpts from the webinar.

Part I: Defining and Creating the High Injury Network

Vision Zero is San Francisco’s commitment to create safer, more livable streets with the goal of eliminating all traffic fatalities and reducing severe injuries. Through collaboration with the San Francisco Public Health Department, the City was the first to identify a High Injury Network (HIN), or the mapping of local corridors where high numbers of people have been killed and severely injured. More specifically, the HIN was developed in San Francisco to connect intersection level injuries to their adjacent street segments, and to assess patterns across the city. With the first HIN created in 2014, San Francisco determined that 6% of street miles account for 60% of severe and fatal pedestrian injuries.

“Creating the HIN was a critical point in inter-agency collaboration on Vision Zero for making what seemed like an initially ambitious goal into something more tangible. It also helped to refocus efforts to conduct a more corridor level approach to understand patterns, and ultimately inform more effective engineering and enforcement measures to save lives.” – Megan Wier, Director, Program on Health, Equity, and Sustainability, San Francisco Department of Public Health

San Francisco officially adopted Vision Zero in 2014, and developed cyclist High Injury Corridors and vehicle High Injury Corridors, and ultimately combined all of the corridors to create the Vision Zero HIN in 2015. In this, they found that 12% of city street miles contributed to 70%, 72%, and 74% of fatal and severe vehicle, pedestrian, and cyclist crashes, respectively. In short, there was a lot of overlap in the locations of these crashes. 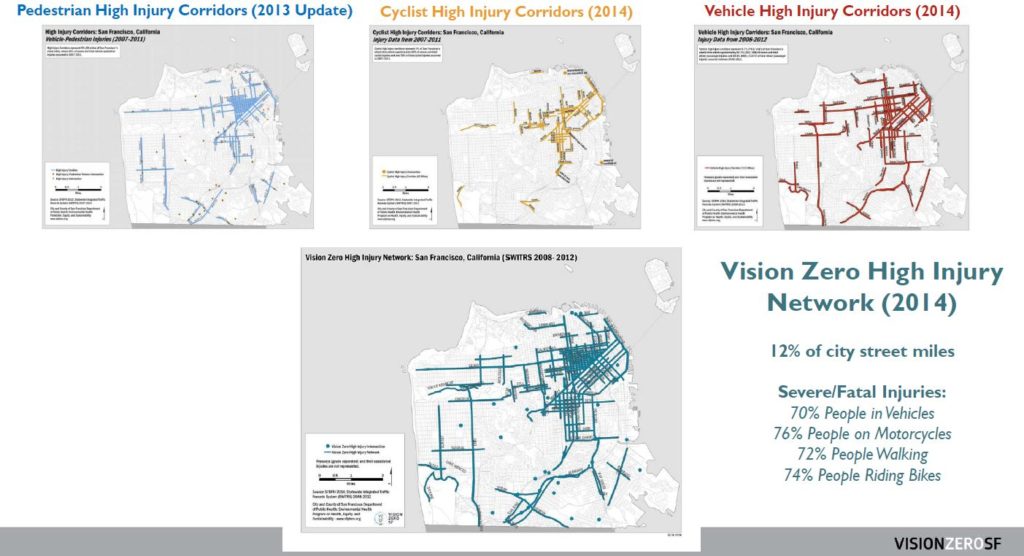 Part II: Using the High Injury Network to Save Lives

According to Tom Maguire, Director of Sustainable Street Division of the San Francisco Municipal Transportation Agency, the HIN helps staff break down the safety problems by mode, and really target engineering countermeasures towards those problems. Further, he says the corridor approach is important because when it’s time to build the sewer, or repave a street, and intersection by intersection effort is not good enough. All agencies need to coordinate, to dig once, and complete an effective capital project that will address all needs in a sustainable way to reap benefits for the years to go.

“We believe street design on the highest injury streets is the way to sustain the safety gains we get through Vision Zero, and that education and enforcement are important complementary tools”. – Tom Maguire, Director, Sustainable Streets Division, San Francisco Municipal Transportation Agency

In addition to engineering, data on the most dangerous driving behaviors informs the City’s education and enforcement efforts. More details are available in the webinar recording.