Tragically, we are still far from reaching Vision Zero in most of our communities, as people’s lives are shattered or even lost each day simply while walking, biking, or driving. These preventable deaths and injuries are, of course, tragic enough. Yet, victims’ loved ones may have their grief compounded even further with feelings of frustration at missed opportunities for support at a cripplingly difficult time.

San Francisco City and County staff decided that was unacceptable and vowed to improve the situation. After hearing the experiences of members of the San Francisco Bay Area (SFBA) Families for Safe Streets, a year ago, they developed a Crisis Response Team to better support families who have lost a loved one in a traffic crash.

“We attended one of their meetings to understand the perspective of these families,” said Megan Wier, Director of the Program on Health, Equity & Sustainability at the San Francisco Public Health Department and co-chair of San Francisco’s Vision Zero task force. “It was sobering and sad. It was moving and very brave of the families to share with us.”

Historically, about 30 people die annually on San Francisco streets. San Francisco has committed to the goal of zero traffic deaths and severe injuries, and the Crisis Response Team is a way of acknowledging that San Francisco is not there yet and wants to do more for those who suffer.

Members of SFBA Families for Safe Streets, one of seven chapters of an organization first founded in New York City, said that it was difficult to navigate the steps from death notification through confirmation and that communication gaps between and within city agencies meant they didn’t know about available support services. Some families said they heard about the death in the media before they even knew it was their child. They also said that when they went to the police department to confirm the victim’s identity, they felt criminalized.

Previously, the San Francisco’s District Attorney’s office was only involved when it was a criminal case, said Deputy Chief Jackie Ortiz, Victim Services Division of the DA’s Office.

“After hearing the family members talk about it, it bothered me,” said Ortiz, a veteran of the office for more than 30 years. “Even if we can’t offer them victim compensation, we should navigate them through the system.”

Although the city departments were already offering many services to loved ones of fatal traffic crashes, such as counseling and financial assistance, Wier said, they were not coordinated nor well communicated. Once they received the concerning feedback and as part of their Vision Zero efforts, the various departments began meeting to find solutions. “What is heartening is that everyone immediately understood the need, began to work together, and developed trust,” Wier said. 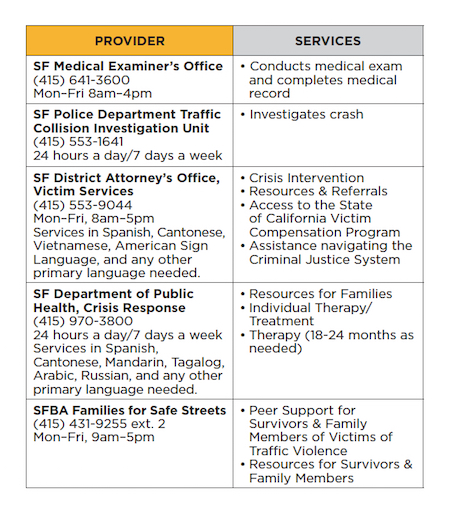 The District Attorney’s office has about 25 professional advocates, who are on the frontlines. “As soon as we put the protocol and procedures in place, they immediately took to it,” Ortiz said. “They do incredible work. They are dealing with victims who are in trauma on a day-to-day basis. They have the hardest jobs.”

The coordination among the DA’s office, the coroner’s office, and the police department is strong, Ortiz said. “We’re all collaborating together as a team to figure out what is needed to provide streamlined information to these families.”

Stephanie Felder, Director of Comprehensive Crisis Services with the SF Department of Public Health, explains that the existing integrated crisis program that responds to homicides and critical shootings was expanded to include noncriminal traffic fatalities. Her team make sure people receive counseling, assistance with making funeral arrangements, and other support services. “We were used to doing this with trauma,” Felder said. “We’re about helping people.”

The Crisis Response Team continually evaluates how they are doing. Each case is different, and part of their protocol is to check in. “Within a week of a fatality, I schedule a call to keep the communication channels open,” Wier said, “so we can evolve and refine our approach and be as responsive as we can be.”

Both Ortiz and Wier encourage other Vision Zero cities to coordinate their crisis response to traffic fatalities, if they don’t already. “This is a need for anyone who is experiencing a traffic fatality,” says Wier. “Any jurisdiction can do better to support people who are often isolated and navigating complex legal and medical issues.”

Many cities have in place a coordinated crisis response for gun violence; traffic violence deserves the same response. Wier adds, “Be responsive to the tragedies that are happening on our streets as we work quickly to eliminate them.”

Have you or someone you love been in a crash? Thanks to the NYC Families for Safe Streets chapter, which offers online services to those who are suffering. Read their guide here.