The Secret to Great Data in Vision Zero? The Community 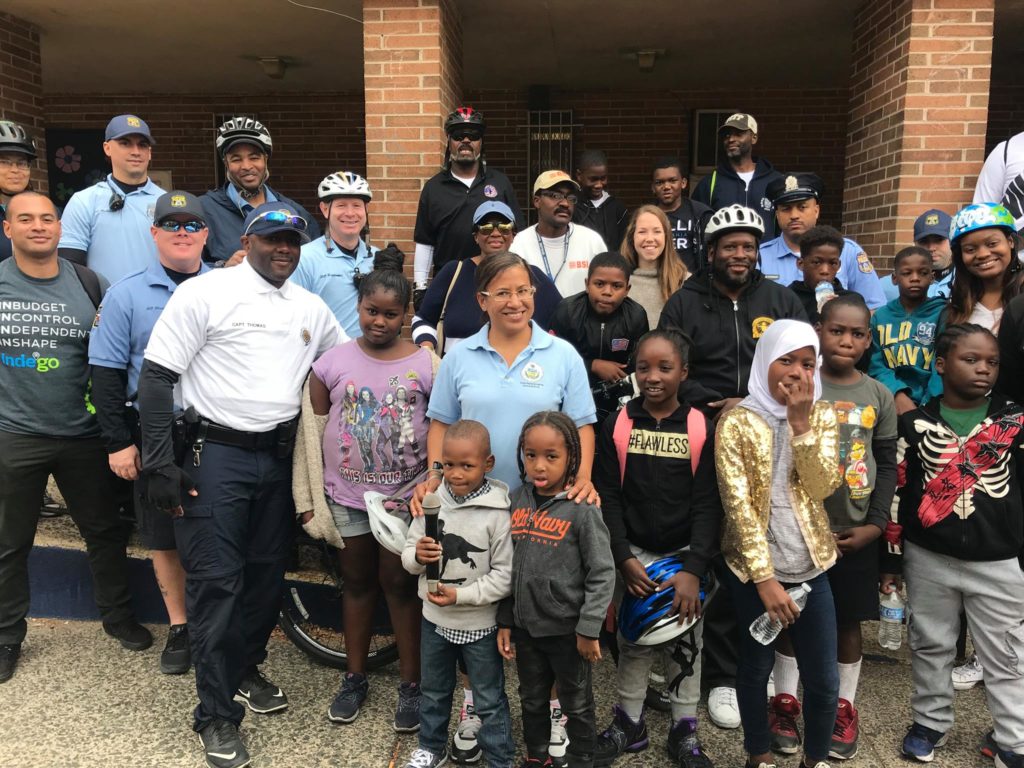 When it comes to experience and deep knowledge of how a neighborhood really works, no one knows better than the people who live there. So, while Vision Zero is a data driven approach, it is also important to remember that numbers and statistics alone cannot capture all of the day-to-day, real-life experiences.

In terms of transportation safety, this means that community members know best important information such as where near-miss crashes happen, and where speeding is most problematic. They experience these issues in their daily lives, even if the issues never show up on a city’s official heat map of problems. As important as formal data is to a city’s Vision Zero work, we also know data is not perfect; there will be gaps. That’s why we urge cities to gather, analyze, utilize, and share both formal data on injury crashes and community input to understand traffic safety priorities.

“Don’t assume you know what the problem is – neighbors are seeing different things on their streets.” – Charlotte Castle, Vision Zero & Neighborhood Programs Coordinator, City of Philadelphia 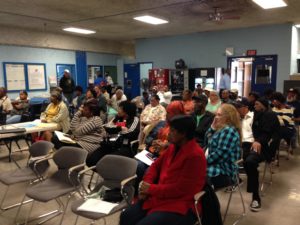 is a Vision Zero city demonstrating how to collect this type of formal and informal data in a complimentary way. Mayor Jim Kenney committed Philadelphia to Vision Zero in 2016, and a multi-departmental Task Force then embarked upon creating a Three-Year Action Plan to kick off a Vision Zero program with the goal of zero deaths by 2030.

Once the Three-Year Action Plan was drafted, staff then took it to the streets to gather more information and collect feedback before releasing the report as final. The City had a focus on engaging neighbors who hadn’t traditionally been engaged in transportation conversations, and in particular, partnering with neighborhood organizations to plan events, or attend events that had already been organized.

Mayor Kenney introduced the draft Action Plan for public comment in March 2017, and in the four months that followed, the City and its Vision Zero Task Force led a discussion with neighborhoods across Philadelphia to learn more about safe streets. In total, Philadelphia neighbors were engaged through 44 community events, including neighborhood association meetings, Police District meetings, and block parties, as well as at festivals across the city. The City also engaged residents to help them learn about the core principles of Vision Zero and what to expect as the City moves forward on the initiative.

“The level of detail with Vision Zero is very granular, and outreach has to mirror that. The city is doing a better job at targeting more diverse groups. This is the kind of ground work needed to see the pay off with Vision Zero”. – Bob Prividi, Philadelphia Bicycle Coalition

We sat down with Charlotte Castle, Vision Zero & Neighborhood Programs Coordinator for the City of Philadelphia, to learn more about their outreach strategies.

Q: What were some of the outreach activities in which the city engaged neighbors on Vision Zero?

A: We wanted a wide array of Philadelphians to attend the events to reach a diverse group of people. We started by attending already scheduled meetings and events such as Philadelphia Police District meetings throughout the city, numerous city festivals during the summer, and block cleanup events. We also organized walks with the non-profit group Asociación Puerto Riqueño en Marcha (APM), which has a rich history of providing bilingual and culturally sensitive community services related to education, housing, and community and economic development to thousands of Philadelphians each year, and also serves on the Vision Zero Task Force.

Simultaneously the Vision Zero Task Force conducted an online survey, and City staff distributed printed versions, to learn more about Philadelphians’ concerns. The survey was combined with an interactive online and printed safety map that allowed residents to mark areas where they were seeing unsafe behaviors, even allowing residents to submit photos of the problem area.

The surveys were translated into Spanish, Chinese, and Russian, and the City partnered with several community non-profit organizations to help with outreach and translation where needed. When the City created the safety map, they predicted they would hear about certain behaviors, but residents brought up a broader scope of issues that was more nuanced than staff expected.

Q: Why did the city want to do something different with outreach – beyond a traditional city meeting?

A: When the mayor ran for office, he ran on a platform to embrace the differences/strengths of Philadelphia neighborhoods. Integrating community outreach and support through all project planning is very important to the administration. It helps to hear from residents from diverse neighborhoods across the city, especially those who aren’t normally able to attend traditional meetings. In Vision Zero outreach, City staff intentionally prioritized neighborhoods that hadn’t spoken with the Office of Transportation & Infrastructure Systems previously and then later went to neighborhoods that had already initiated a dialogue with the city. 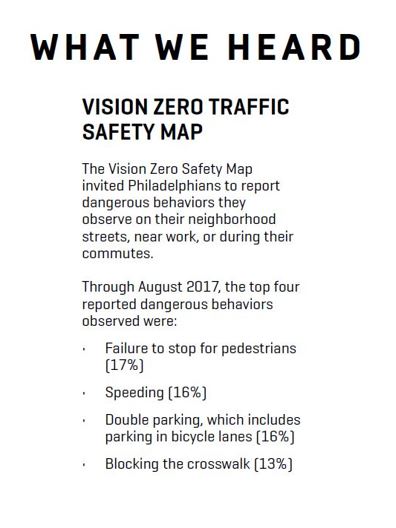 Q: What are lessons learned or challenges you would share with other Vision Zero cities?

The most important lesson—and always a good reminder is: Don’t assume you know what the problem is – neighbors are seeing different things on their streets. And through the four months of active engagement, the City gained a much deeper understanding of the issues moving forward.

A challenging aspect of the outreach has been maintaining relationships with residents who attended one of the 44 public meetings. We want to have boots on the ground through multiple departments (police captain, Office of Transportation staff, e.g.) institutionalizing Vision Zero across the departments and maintaining contact with residents so we are working to do that now, after the initial outreach.

Vision Zero is based on the concept of a shared responsibility for safety, and outreach and engagement to communities is essential for success. There is no one good time for engagement, it is an iterative process that occurs throughout any good planning initiative, including Vision Zero. Yet, getting started with Vision Zero in your community, and soliciting feedback from neighbors at the beginning of the process is really important. This provides education to everyone involved, and allows for more buy-in from the community to the changes that ultimately follow the initial conversations.

Philadelphia demonstrates a commitment to engagement in the early phases of its Vision Zero initiative to (a) think creatively about how to engage and who to engage residents, meeting residents – especially those who don’t typically participate in City planning processes – in their own neighborhoods at community events, and; seeking feedback on the City’s Vision Zero Action Plan, the roadmap for success, before it is formally adopted. These are strategies from which other Vision Zero cities can learn.