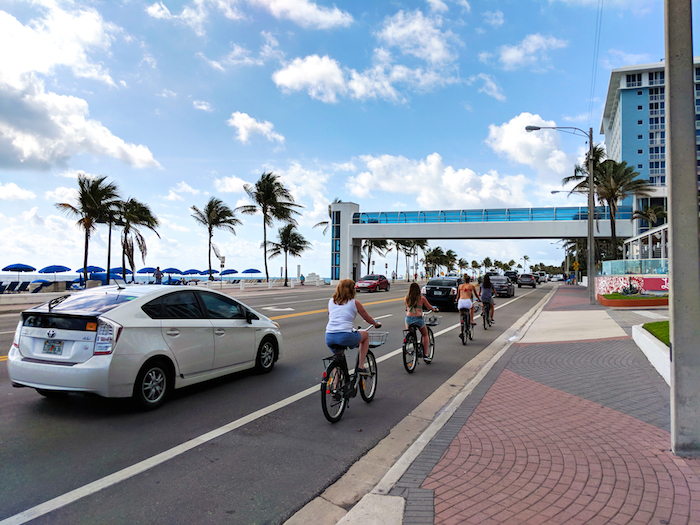 Vision Zero is often associated with big cities in the U.S. — New York City, Los Angeles, Seattle, and Boston are a few that come to mind — but Vision Zero’s Safe Systems approach can work for communities big and small. In an effort to demonstrate effective Vision Zero programs in mid-sized cities, the Network has highlighted efforts in Fremont, California (population 230,000) and Durham, North Carolina (population 228,000). In this post, we highlight the work of Fort Lauderdale, Florida, one of the Network’s early adopter Focus Cities, with a population of 179,000.

Regardless of population size or budget, communities – urban, suburban, or rural – can integrate Vision Zero principles into their work by prioritizing safety in choosing policies and practices, overall decision-making, and resource allocation.

Vision Zero Fort Lauderdale was developed after residents identified safety as a top concern in their city. Since then, City staff have worked to collaborate with a diverse group of partners through a number of Vision Zero working groups and initiated a data-driven approach to determine priorities, which include infrastructure projects and education programs focused on safety. We sat down recently with City of Fort Lauderdale staff members, Karen Warfel, Principal Planner, and Josette Severyn, Vision Zero Coordinator, to learn more.

Q: How did Vision Zero start in Fort Lauderdale and what brought urgency to start the initiative?

South Florida has consistently been reported as one of the most dangerous metropolitan areas for pedestrians since the 1990s. Through the City’s community-visioning process in 2012 – Fast Forward Fort Lauderdale – the community identified connectivity and mobility as top priorities. Our neighbors stated they want to be more connected and be able to move easily and seamlessly throughout the city’s transportation system. As a result, the City began to prioritize multimodal safety.

After finishing “Fast Forward,” through a citywide reorganization, a dedicated Transportation and Mobility Department was formed in in 2012. Multimodal safety immediately became one of the main focus areas for the newly formed department.

City staff worked quickly to develop and adopt a Complete Streets policy in 2013, followed by the implementation plan – Connecting the Blocks – in 2014. These efforts brought together engineers, planners, architects, and others for the first time to address questions such as, “What do we need to do to improve the streets, beyond infrastructure?”

With Complete Streets and Connecting the Blocks initiatives successfully underway, the City reached a turning point. It was time to establish a goal, which ultimately became zero. This kind of groundwork, building buy-in and collaboration from multiple departments, has helped our Vision Zero work enormously.

“When we drafted our Vision Zero strategies, everyone became part of the process, which made the effort successful.” ~ Karen Warfel, Fort Lauderdale Principal Planner 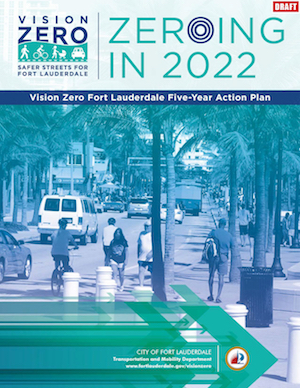 Q: What is your Vision Zero team working on now?

With a new mayor and city commission recently elected, we are working to finalize “Zeroing In 2022”, the city’s Vision Zero Five-Year Action Plan.

Once the plan is approved, one of our top priorities is to conduct a lighting study along corridors where we’ve identified a high number of fatal and severe injury crashes. An important data point that resulted from the city’s data analysis is that most crashes occur between 6 p.m. and 6 a.m. As a result, we are diving deep into the data to analyze lighting as a factor. Our goal is to identify the most dangerous areas and then prioritize them to determine where we can feasibly enhance lighting. (Interested in this topic? Read the Vision Zero Network’s blog post of the importance of lighting to roadway safety.)

Q: What are one or two challenges you have faced and how are you working to resolve them?

Fort Lauderdale’s transportation network – including our 10 corridors and intersections identified with a disproportionate share of fatal and severe injury crashes – is comprised of state roads, county roads, and city roads; however, the traffic signals are controlled by the County. The State and County have different design standards from the City and each other. With multiple roadway jurisdictions, implementing Vision Zero requires a lot of coordination and communication with and among the various agencies. Due to this growing need to coordinate, the City created an Intergovernmental Coordinator position to help facilitate the coordination processes and communication among the transportation agencies with jurisdictions within Fort Lauderdale.

Another example is the City’s desire to place more crosswalks on arterials where crashes are more prevalent. The Florida Department of Transportation has a policy that provides minimum location characteristics that make it challenging to have new crosswalks installed; see policy below. This is challenging in an urban design context, as most of our arterials are state roads, which also tends to be consistent with our high injury network.

Q: What are the top mid-range goals for Vision Zero in Fort Lauderdale?

A top goal is to implement lighting improvements once the lighting study is complete. In addition, we are preparing to take a deeper dive into data with our Traffic Safety Study. Through this study, we want to determine the underlying dangerous behaviors that are causing crashes. We have funding to conduct a pilot study to look for near misses and be more preemptive in deterring injury crashes before they occur, especially for people walking and bicycling. (Interested in this topic? Check out the Vision Zero Network post featuring Seattle and New York City examples of working proactively to identify dangerous behaviors and systematically implement safety projects.)

Q: How are you thinking about, or already addressing, community engagement and equity in your Vision Zero initiative?

We are working on developing a Vision Zero traffic calming toolbox that neighborhoods can use to educate themselves on different traffic calming countermeasures, to help them articulate the changes they want to see and provide them with greater opportunity to determine what works best for them. With all the engineering projects that our Transportation and Mobility Department puts into place, we always include community engagement processes to deliver a project that prioritizes safety and that is aligned with their quality of life goals and needs. For any projects on state or county roads, City staff makes sure to provide comments to prioritize safety and safe infrastructure.

City staff works closely with its partners at the Florida Dept. of Transportation (FDOT), Broward County, and the Broward Metropolitan Planning Organization (MPO) to ensure the public is engaged in the design of projects. City staff comments on FDOT plans based on neighborhood interests to advocate for those improvements, and ensures the public meetings are in accessible locations to the residents. City staff also attends those partner meetings to be aware of and follow up on any concerns.

For example, FDOT was designing a resurfacing project that crossed over into two neighborhoods. Both neighborhoods had concerns about accessibility across the arterial street and requested that additional pedestrian crossings be added, all of which were at existing signalized intersections. Although this couldn’t be done as part of the resurfacing project, City staff continued to work with FDOT, and they did add the four additional crosswalks, significantly improving pedestrian safety.

Another example is a Broward MPO-funded project that was focused on connecting people to transit corridors through new sidewalks and bike lanes. One of the segments of the project was two miles long and included a bike lane and pedestrian improvements to connect a large city-owned park to a main transit corridor in downtown Fort Lauderdale. The street is owned by Broward County, but was being designed and managed by FDOT and is partially included within a neighborhood that participated in the city’s Neighborhood Mobility Master Plan process. Despite resistance from the partners, coordination helped to fulfill a neighborhood request for high-emphasis crosswalks at two signalized intersections as part of the project.

A couple examples of our equity-based engagement activities and engineering components include: 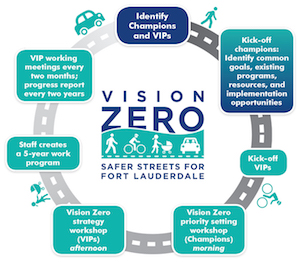 Q: Are there lessons learned that you would pass along to other mid-sized cities interested in Vision Zero?

Creating working groups among various departments to implement Vision Zero has been very successful for the City of Fort Lauderdale. We have three working groups, that are comprised of (1) Elected officials to guide policy and priorities (champions), (2) Vision Implementation Partners (VIPs) to implement programming and projects, and (3) our internal Vision Zero Task Force (employees). These working groups have a total of 45 partners and have helped us open the door and initiate conversations with multiple partners within the city and county, as well as FDOT. This approach has been instrumental in completing projects we want to see within the city to improve safety and save lives.

Another tip is to work with these groups to establish branding and communications, as well as a shared understanding of Vision Zero before going to the public. A lot of people don’t understand why Vision Zero is different and why the goal of zero is a must. The working groups can help facilitate the learning process and adoption of shared goals.

Join the Vision Zero Network on July 10 for our Vision Zero 101 webinar and a deeper dive into Fort Lauderdale’s experiences.