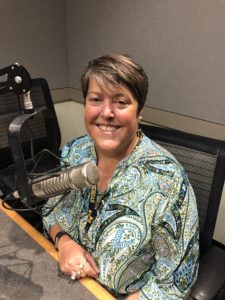 With a population of almost 900,000 people and growing at a rate of ~50 people per day, Charlotte, NC is a promising up-and-coming Vision Zero city. Angela M. Berry is the Traffic Safety and Vision Zero Manager at the Charlotte Department of Transportation. As a Professional Engineer, Angela designs and implements transportation projects and heads the city’s Vision Zero Task Force. Today, she’s sharing ways she applies transportation engineering tools to keep Charlotte’s residents safe.

Vision Zero Network: The Charlotte Vision Zero Action Plan eloquently describes the impact of traffic violence, stating that “While Vision Zero is a data-driven approach, it’s also important to remember that there are people behind the numbers. The 74 fatalities in 2017 are 74 loved ones, 74 members of our community and 74 families impacted.” There is often concern that Action Plans can languish on shelves after they are complete. How is the City of Charlotte using the 2019-2030 Action Plan on an ongoing basis to make real change?

Angela Berry:  The Action Plan is broken down into actionable strategies to be achieved by 2020, 2025, and 2030.  The actions needed to complete the strategies span many stakeholders. This means no one group is responsible for the success of the plan. Instead, it is a collective effort. Additionally, many of the strategies involved in implementing the Plan are being embedded into all of our ongoing programs. For instance, a project to install a new traffic signal would rank higher on our list of projects if it is on the High Injury Network, thanks to the Vision Zero focus.

VZN: Transportation leaders around the US are working on ways to manage speed on their streets. We reported about speed management wins and we have heard that Charlotte was successful in reducing speed limits to 25 miles per hour on local streets. Can you tell us more about that process? How is it working? Can you share recommendations to others focusing on this strategy?

AB: In November 2018, just as we were wrapping up the development of our Vision Zero Action Plan, our City Council approved a Traffic Calming Policy. This page allows residents to request the lowering speed limits on their local streets to 25 mph. Additionally, the Charlotte Department of Transportation Director has agreed to the lowering of all the City maintained streets in our downtown central business district to 25 mph. Approximately 30% of our streets in downtown are still 30 or 35 mph. We hope to have the 25 mph downtown implemented by March 2020.  This has been a goal of ours for several years and I’m happy to see it being implemented.

VZN: Congratulations! It is fantastic to see Charlotte joining a number of US cities – and states – using data to making their streets safer. We just wrote about this report that recommends that California join other states that are “enabling their cities to lower their speed limits and are exploring alternative methods to establish speed limits based on safety goals and local context instead of the 85th percentile speed.”

Angela, you are really knowledgeable about the USLIMITS2 model and other alternatives to the traditional 85th percentile approach for setting speed. What have you learned from your work in Charlotte about setting speeds? Where do you see North Carolina and the US going to manage speeds in our communities?

AB: This is a great question. My staff routinely uses USLIMITS2 as well as the model from Quebec, Canada (published in the ITE Journal) to support our decisions about changing speed limits on City maintained streets. Prior to Vision Zero, if one of the models supported leaving the speed limit as it was, that is what we did. Under Vision Zero, if one of the models supports a lower speed limit, we choose to lower the speed limit. This is a significant shift in our philosophy and was prompted by a conversation with a citizen who questioned our decision making after adopting Vision Zero. We discussed it internally and agreed that the citizen made a valid point that we should be favoring lowering speed limits when the data supports doing so. 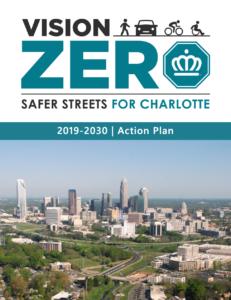 VZN: We’ve also seen Charlotte’s Vision Zero interactive map. What’s your goal in inviting people to share where they feel unsafe? How is this community input integrated with data gathered from injury crashes? What are you learning from the mapping effort that you can share with other cities who work to incorporate public input and data in their programs?

AB: The goal was to see what overall factors our citizens considered important to safety as they move around our City. Overwhelmingly we saw that they have concerns about behaviors (driver, pedestrian, and bicyclist) as well as the roadway design itself. We are still sorting through the over 2000 comments to see if there are specific projects we can identify. Another interesting take-away from the public input map was that most of the comments occur within 600 feet of the High Injury Network.

VZN: We’re impressed by the breadth of work in Charlotte to get to Zero. We’ve read about Charlotte’s work to:

We reported on some of these efforts in Vision Zero Growing in the South. Can you update us on how the community is receiving the work?

AB: We have a lot going on here in Charlotte! I’m proud of all we are doing and the breadth of involvement we have in Vision Zero across the city from government and advocates. The lowering of speed limits on local streets has been very well received by our citizens. The traffic calming effort is moving forward with a prioritized list of locations for speed tables and speed cushions. This was achieved through close coordination with the Charlotte Fire Department. I have a direct connection to the construction of 15 new pedestrian crossings per year as I co-manage that program with our Pedestrian Program Manager, Jennifer Stafford. Projects range from marking crosswalks where they are needed (typically on lower volume streets) to full traffic signals that provide opportunities for pedestrians to cross higher volume/busier streets.

VZN: Angela, thanks for sharing more about your work in Charlotte. It has been great to follow @CharlotteDOT and #VisionZeroCLT. We know that cities like yours do a lot with small staff. And the work is important – that is why supporting cities on speed management is one of our Top 10 New Years Resolutions.