Traffic violence is a national epidemic that kills nearly 40,000 people and injures 3,000,000 a year. On Sunday, November 15, families and communities around the world will be remembering the millions who have been killed and seriously injured on our roads, and advocating to stop these preventable tragedies. In this month’s People Behind the Progress, we ask Christy Kwan and Faith Cole Hall about their experience co-founding Washington, DC’s chapter of Families for Safe Streets (DC-FSS), a growing movement that now has 14 chapters in North America. Christy and Faith also share their take on the best ways to reduce traffic violence and work toward racial justice and equitable mobility for all.

Vision Zero Network: Families for Safe Streets (FSS) supports those affected by the trauma of traffic violence and advocates for changes to prioritize safety for all on the roads. What motivated you to help start a local FSS chapter in Washington, DC? What was the hardest part of founding the organization? What is most rewarding?

Faith Cole Hall: The Washington, DC chapter was started in a similar way that many other chapters have started: We believe that traffic violence in our neighborhoods is inexcusable. Around December 2018, co-chair Christy Kwan and I began having conversations about starting a chapter because the District recorded a total of 36 traffic fatalities in 2018 — an unfortunate ten-year high. Also in 2018, local advocates began to hold vigils around the District to raise awareness and to demand for safe streets in direct response to the lives that we have lost. We quickly organized and became a formal chapter in the first half of 2019.

Christy Kwan: The hardest part of starting up a chapter is finding the time, the people, and the momentum to keep pressing forward. We’re an all volunteer group with day jobs and families. It’s also exhausting work because many of us are reliving our traumas of having lost family members or surviving a crash. Though we work through it because we don’t want others to suffer from the same pain and trauma we have. Traffic fatalities and serious injuries are preventable. There are solutions out there to end traffic violence through interventions like lower speed limits and better street design. It’s been incredibly rewarding working with others who deeply understand why this is important work and the potential for change in front of us.

VZN: Families for Safe Streets is called to do many things. What does it take to support families who are experiencing trauma? And what is it like for families to advocate at the city level?

CK: Our mission is to provide peer support and an opportunity to channel our grief and trauma into advocating for life-saving changes. It sounds deceptively simple… but it’s so much work.

For peer support, as a new-ish chapter, we have opted to work with existing support groups, such as trauma survivors’ support groups at our local hospitals. In addition, we started to roll out our own support meeting before stay-at-home orders began for the pandemic… which we now have pivoted to working with other FSS chapters to offer a virtual option. There’s definitely power in knowing we are not alone in our experience and being able to celebrate our successes, but also acknowledge the setbacks and realities that come with having experienced traffic violence.

We participated in the fundraising 5k run offered by the founding NYC FSS group last October after the Vision Zero Cities conference. We used some of the funds for a training offered by the Wendt Center for Loss & Healing, a local non-profit here in DC, for our steering committee members to learn how to better support those who are grieving. While we believe that advocating and sharing our stories is critical, families’ overall well-being is the most important. We wanted the Wendt Center training to help us have a better appreciation for how we can engage survivors and loved ones in a way that promotes their well-being first without inflicting harm. And, if and when people are ready, we hope they will want to work with us on advocacy.

While we were building momentum and finding people willing to join the steering committee, the District unfortunately experienced a grim streak of traffic fatalities in a single weekend in April 2019. Two months later, several Councilmembers introduced Vision Zero legislation that included wide-ranging policy solutions to address traffic violence. With the help of our local sponsoring organization, the Washington Area Bicyclist Association, we quickly organized ourselves to learn more about the legislative process in DC, wrote both organizational and personal testimonies, and participated in an 8-hour Council hearing last October. In support of the final vote for the legislation, one of our founding members, Meredith Tomason, wrote an incredibly personal and moving op-ed so others can understand how traffic violence has impacted her family and to demand for change in her mother’s honor. The DC Council unanimously voted to support the bill on September 22.

While it was a rewarding process to become involved with the local legislative process, it was also incredibly daunting to put ourselves and our personal stories out there in such a public and formal forum. At the October public hearing, I had spent so much time supporting others with their personal testimonies, that when it came time for me to testify, I was so ill prepared emotionally that I sobbed through my 3 minutes. As I was sitting there looking at my councilmembers on the dias, I realized I had never publicly shared the story about my cousin’s fatal crash, which happened nearly 20 years ago. But we do this because we believe strongly that no other families should suffer from traffic violence.

Unfortunately, too many families have had these experiences. And culturally we do not talk about them in a public way. Too often we suffer in silence. While dealing with this pain can have a negative, corrosive effect on us, it can also be a strong call to action to unite us and help us ensure no one joins this unfortunate club that we don’t want to be a part of.

VZN: Last year, half of DC’s fatal traffic violence victims died while traveling in historically Black neighborhoods east of the Anacostia River even though residents of these neighborhoods comprise less than a quarter of the District’s population. As the Vision Zero community works to better recognize intersections between traffic safety and institutionalized racism and works with others to address these inequities, what is the DC chapter learning?

FCH: DC Families for Safe Streets is committed to the principle that Black Lives Matter and the long fight to eradicate systematic racism and implicit bias on our streets. In order for our work to most effectively address historic, systemic inequities, we believe that our leadership team and the stories we elevate should reflect DC and the range of lived experiences on our streets. We set a goal for ourselves early on to secure racial and geographic representation on our steering committee. 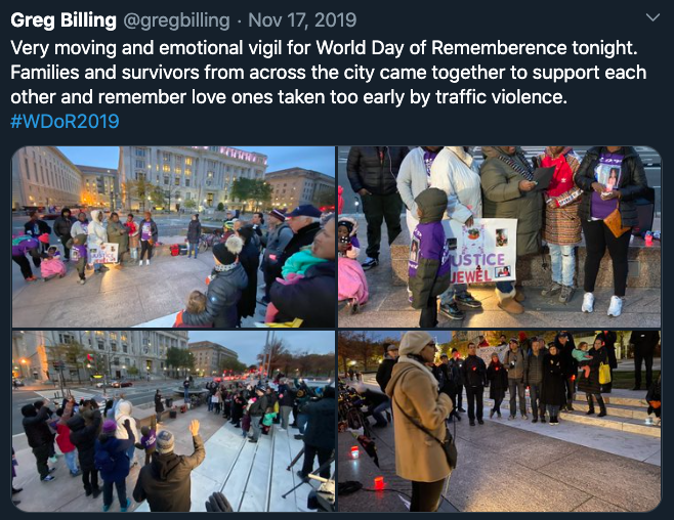 While our steering committee has representatives from nearly all eight Wards, we still have work to do. A disproportionately high number of fatal crashes occur east of the Anacostia River. In the work we have done to engage community leaders, and by extension identify individuals interested in working with us, we have learned that a good pathway forward is to develop a record of demonstrated action that can help people decide on whether and how they might like to work with us, before making commitments.

We found value in that idea and are proud to stand by our record of action over the past 16 months. In the coming year, we look forward to growing our team both in terms of leadership to chart our future course and collaborators seeking to share their experiences.

VZN: People are staying much more local with COVID-19. How has this affected your ambitions to make roads safer in Washington, DC? Will it affect how you honor World Day of Remembrance?

FCH: Our ambition for safer streets is stronger than ever. We are thrilled that the DC Council unanimously passed Vision Zero legislation on September 22. This is the culmination of several years of work across a broad range of collaborators, including the work from the Washington Area Bicyclist Association. The DC chapter was really born out of the public awakening and outcry that helped generate this legislation. We celebrate its passage and know that there is still a lot of work to be done to fully implement in a challenging fiscal environment.

COVID-19, coupled with national calls for a long overdue reckoning with racial injustice, are enormous motivators to keep at this work. This year, DC has already surpassed the total number of traffic fatalities that occurred in 2019. Nationally, while we have watched vehicle miles traveled decrease, we have also seen speeds and the severity of crashes increase. There are fewer people on the road. Many are discovering new opportunities for walking and biking closer to home. We hope the experience of staying closer to home inspires people to think more about the built environment that they traverse. Do they feel safe? Is it possible to run most essential errands within a 20 minute walk?

In 2020, DC-FSS’s work program goals are to share personal accounts, work to ensure that the recently passed Vision Zero legislation is fully funded and equitable, and carry out a World Day of Remembrance event with other chapters on November 15. Plans are in the works for a virtual event, which creates new opportunities to transcend geography for a national presence.

VZN: What advice can you give to transportation safety advocates about staying active during these isolating times?

CK: During these times, we have pivoted to maintaining our connections over Zoom. My fellow steering committee members inspire me to keep pressing forward with our work. There’s so much that is going on in the world right now, but we find time to connect with one another as friends and create space for compassion for each other and ourselves. When the stay-at-home orders began, we emailed the national FSS listserv to see if any other chapters wanted to collaborate on holding virtual support community meetings. It’s been wonderful working with members from the New York and San Francisco Bay Area chapters to develop peer support programming, in addition to meeting members throughout the country. We always talk about how we cherish these connections, despite the unfortunate club that we are in.

During these times, the biggest advice I can offer (and also if I listened to myself on it), is to take time for ourselves while carrying out this difficult work. I remember in one of my first conversations with Amy Cohen from the founding NYC chapter is that this work is a part of a marathon, and not a sprint. We inherently need to take care of ourselves to ensure there’s energy to produce lasting change. And I also encourage advocates to not only be open-minded, but also to actively question our own privilege so we can truly build a supportive, inclusive community.

VZN: Thank you, Faith and Christy, for co-founding the Washington DC chapter of FSS and for helping so many families and communities. We want to share this Guide for Creating an Effective Chapter and readers can contact info@familiesforsafestreets.org. Readers can also read our blog post From Grief to Action about the New York City FSS chapter.