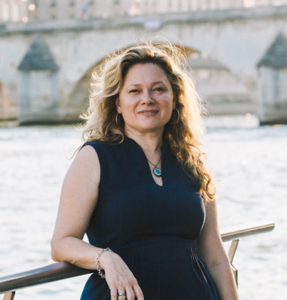 The New York City (NYC) Department of Transportation (DOT) takes Vision Zero seriously, with a focus on redesigning streets for safety, as well as advancing proven policies and leading robust outreach and education efforts citywide.  The NYC DOT’s Safety Education and Outreach Division’s 30 staff reach over 600 schools and 150 community centers every year. They do direct work – like distributing 210,000 free helmets to New Yorkers – and strategic work to create lasting safety changes with community input. In today’s feature, we’re going to hear from Kim Wiley-Schwartz, Assistant Commissioner for Education and Outreach, about her work on the frontline of Vision Zero.

Vision Zero Network: As the longest-running Vision Zero city in the US, New York City has inspired many of us around the country. What have been the most impactful changes the City has implemented as part of Vision Zero?

Kim Wiley-Schwartz: The most impactful change in NYC has been the culture on our streets and the way people talk about how their neighborhoods work. Vision Zero has helped us expand what we expect from our streets and from each other.

Another change is the way traffic crashes are handled in the news. When I first started this work a dozen years ago, news reports about traffic crashes always started with the cyclist or pedestrian – and oftentimes included misinformation blaming the vulnerable road user. We credit Families for Safe Streets for helping to contextualize the impact that fatalities and severe injuries have on families. The stories that these families share have been especially important in the debate on speeding and are helping us to get the most comprehensive speed camera program in the country.

KWS: The speed camera program has had many twists in its short five years but what has been constant is that these cameras have lowered speeding more and resulted in fewer injuries and deaths citywide. In 2014 – following work by advocates – NYC’s DOT enacted a pilot program, including speed cameras and traffic-calming in 140 school zones across the city. The number of crashes in the city has decreased since the program started – including a 63% reduction in speeding traffic and 14% reduction in traffic injuries as described in this Automated Speed Enforcement Program Report.

But last summer, the state-level speed camera program legislation expired and the cameras went dark. A bill to keep the program running passed in assembly but did not advance in the state senate. But thanks to transit advocates – especially family members who have lost loved ones to reckless driving – the new state legislature this year voted to expand the number of school zones with speed cameras from 140 to 750.

Once all the new zones are active, we believe we will be able to address every school with a nearby speeding program. We have a fleet of moveable cameras and expanded school zones (within a quarter mile radius of a school) so that we can manage speed on arterial roads. This is important because in NYC, more than half of the fatalities and significant injuries are on arterial roads, where we have complicated intersections. Managing speed on these corridors is incredibly important.

And, we are doing this without political outcry because program is managed so well. The system is designed to be equitable and fair – the penalty is $50 and no points on a driver’s license, far less than the penalty for being caught speeding by a police officer. Yet this relatively low fine works! Just under 70% of people who get a speeding ticket don’t get a second one. The program performing its duty which is to modify behavior particularly in places where we haven’t been able to engineer the speed down.

VZN: Wow. The impact of this program is impressive. You manage a huge department and budget with ambitious goals. What has been hardest in your job working on outreach and education? What do you know now that you wish you knew when you started the job?

KWS: In my work under a few administrations, my biggest lesson has been to follow the data and stay focused on dangerous driving behavior as your main message. You have to be laser-focused on messaging and not be pulled in multiple directions. You have a million things you can advise people to change in the traffic environment but staying focused on unified messaging is ultimately more effective.

Let me give you an example: the media keeps pointing to pedestrian and cyclist behavior. We have had to continue to say that we understand that all road users make errors, and we also know that 70% of crashes result from driver behaviors including speed, fast turning, distraction and impairment. The point of Vision Zero is to create a safe system where dangerous driving behaviors can be prevented, and their serious consequences avoided. In a collision between a driver and a pedestrian, the pedestrian will never win, so we focus on driver behaviors to prevent that crash or make sure it doesn’t result in major injuries.

VZN: In this webinar that we presented together, we learned that one part of New York City’s Vision Zero progress has come from strong city leadership and coordination between agencies. A lot of communities consider this a major challenge. Can you share advice about increasing cross-departmental teamwork?

KWS: Coordination within the NYC Vision Zero Task Force is really important. This group is convened by the Mayor’s Office of Operations and we convene every two weeks. It is important that the leadership comes from the Mayor’s office. Vision Zero was one of the signature initiatives of his campaign for office, and it’s crucial to know our support is coming straight from the top. The Office of Operations tracks all initiatives that are part of the Vision Zero Action Plan and brings together all agencies involved in Vision Zero to the table to give project updates, exchange ideas, share best practices, consider new policies, and make improvements to existing initiatives. It is a big group – the Department of Transportation, the New York City Police Department, the Department of Health and Mental Hygiene, the Taxi and Limousine Commission, the Department of Citywide Administrative Services, the Business Integrity Commission (who oversees all private sanitation), and the Sheriff’s Office – but there is very collaborative spirit. Each office has individual metrics and we review these monthly.

One example of our teamwork came in July, when our Mayor asked us to address the bike fatality crisis. We looked at all of our purviews and what each agency is contributing. We’re discussing now about the darker months. We have many working groups. We are in constant contact and the people who serve on the Task Force are people who can bring back the things and implement them inside the agency.

I advise Vision Zero communities to ensure leadership is involved in the Task Force, that it meets as often as possible, and that each agency owns individual and shared metrics towards the goal of zero deaths.

VZN: It was so impressive to read New York City’s Vision Zero Year Five Report and see the positive trend from early Vision Zero work. Unfortunately, 2019 has been a tough year around the country in terms of the number of traffic fatalities around the country. How do you respond to people who cite these statistics and use them to suggest that Vision Zero is not working?

KWS: Vision Zero started in the midst of a trend – across the country – of increasing traffic fatalities. That nationwide trend has continued even as New York City bucked it with five consecutive years of decreases in fatalities. But cultural change doesn’t happen overnight, and as our Commissioner, Polly Trottenberg, has stated, progress is not always linear. This year, unfortunately, we have seen an increase in fatalities – which is still lower than we would have seen if Vision Zero had never begun. As we work on change, we need to harden safety improvements in place, and our teams at NYC DOT have been completing a record number of projects in recent years.

We know that “safe systems” approaches, speed management, and automated speed enforcement technology have positive effects. We have to stay focused on culture changes and mode shift. Anyone who works in statistics understands that these things are not linear. We’ve been looking at the severity of injuries over time and we believe that the injuries will be less severe with increasing speed management.

I encourage people to look at data and look for real stories. Ask: which areas of your city have seen changes? Which populations – in our case: children and youth – are experiencing fewer fatalities? We publish year-on-year fatality numbers, and stay focused on the ultimate goal.

We also look at the cumulative wins – such as reducing speeding on arterials – that will lead to long-term reductions in fatalities. These multi-agency, long-term, culture- transforming projects are leading to a change. I don’t blame people for saying Vision Zero isn’t enough. But it is premature to say that; and it is not the way public health officials look at things. When working to stop epidemics, health officials leave no stone unturned and we should be similarly thorough in our safety work.

VZN: Speaking of epidemics, can you talk about New York City’s focus on managing speed? Why is it so important? What has most surprised you about this work? And, what recommendations do you have for other cities on working on speed?

KWS: Related to speeding, from a communications perspective, you have two jobs: first you have to establish what the speed limit is in your city; and then you have to explain why it matters.

To establish the speed limit in the public’s mind, it is much easier to do if there is a speed limit change. In our first year of Vision Zero in NYC, Families for Safe Streets won a 5mph lowering of the speed limit (from 30 to 25mph). The science doesn’t lie about the ramifications of speed, and the advocates were successful in lowering the speed limit in late 2014. We took advantage of this moment and ran ad campaigns about the speed limit. We had a full day of public outreach where we distributed over 800,000 postcards directly to New Yorkers even negative press which included the speed limit. We continue to educate on the back of parking meter receipts.

Then we took time to educate about why 5 mph makes a difference – with examples based on the physics of stopping distance and speed.  We have a simple explanation: That small 5 mph difference in speed massively changes the odds of pedestrian survival. We’ve used the speed cameras work I mentioned earlier to educate people about why speeding is a problem and why it matters.

VZN: We are hoping to see you at the October 10-11 2019 Vision Zero Cities Conference. What are you particularly excited to learn more about in this gathering? And/or what are you excited to show off in NYC’s recent VZ work to others?

KWS: The conference is a great time for people who work at the city levels to get together with sister cities. As cities, we are all in states, and those states control so many aspects of our work. I’m looking forward to talking about how states need to get involved in education, legislation, and redesign on state roads.

I’m looking forward to sharing how schools and community centers can be at the center of Vision Zero work. Every principal and parent cares about helping kids to get to school safely. Schools and community centers are places where people gather every day. We have the chance to communicate with families and listen and learn about what they want from their neighborhoods.