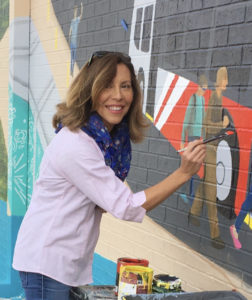 For this month’s People Behind the Progress, we are talking with Councilmember Shirley Gonzales, who led the way to establishing the first Vision Zero community in the state of Texas in 2015. She recognized the urgency, given that the traffic fatality rate in San Antonio is three times as high as that in New York City, and set the city on its course to adopt a Vision Zero commitment with a strong emphasis on equity. Elected officials are a critical force toward zero deaths. We are excited to talk with Councilmember Gonzales about her leadership, perspective on community impacts of the pandemic, and ideas for the future of Vision Zero.

Vision Zero Network: You have been an early leader and passionate spokesperson for Vision Zero. How and why did you make traffic safety a priority as a Councilmember in San Antonio?

Councilmember Gonzales: Early in my tenure, when I was walking the streets and campaigning, people would tell me stories about family members killed by speeding traffic, about cars hitting kids while they were playing in the neighborhood. It is tragic. So, I googled Safe Streets and came upon a Vision Zero Cities symposium in New York City. I bought a plane ticket and went to the conference and learned how New York was making a big difference with slower speeds and Complete Streets. I learned about what other cities were doing and felt inspired.

When I came back from New York and started talking with my colleagues, it was not a hard sell. We started small with a focus on school crossings. In September 2015, a demonstration at City Hall marked the start of the city’s Vision Zero effort, aimed at eliminating traffic deaths.

VZN: I learned a lot about your focus in San Antonio from reading this article. You are an advocate for using data to help your City be more equitable in how transportation dollars are spent. Tell us more about what inspires you and who is served by your leadership on Vision Zero?

SG: The year that we started the Vision Zero program, I described that public safety is my first priority as an elected official. Traffic fatalities and serious injuries take an enormous toll on society and families, but they are not inevitable. San Antonio families deserve safe streets, and they deserve streets that respect and protect all road users. People who walk and ride bikes should have the same level of protection as those who drive.

And Vision Zero reaches into communities that have been underserved for years. For those of us who have been preaching Vision Zero for a long time, we’ve known that this is about equity. Our lived experience tells us that the richer neighborhoods have better infrastructure. And the data that comes from Vision Zero proves this – people in the poorest districts are at the biggest risk to be killed in traffic crashes.

I knew it would be challenging to get funding directly to these underserved districts, due to the history of disinvestment. San Antonio has had single member districts since 1978, and it is hard for poorer communities to catch up. Vision Zero allows us to use data, to focus investment and fix these inequities.

Here’s an example of how we’re doing that: San Antonio uses a Pavement Condition Index to grade street quality. When we were budgeting for the fiscal year 2018, we used an “equity lens” to allocate resources. Instead of dividing funds equally among the 10 council districts, an equitable budget commits more resources to areas and populations where needs are greater, often areas that have been largely ignored for decades.

VZN: Interesting to hear that Vision Zero helped some of the Councilmembers to see the inequities and address them. How can this work be continued, even as we are entering a time of limited resources?

SG: Yes, the work to build an equity lens into our $2.7 billion city budget was an important step. And as we enter into an even more constrained time with COVID-19, while we might have more limited funding in the future, we need to continue to invest to fix the inequities in cities across the country. It is fundamental in transportation and housing – and even more relevant right now.

In addition to speed management and engineering investments, we can do even more to help make equitable investments for the entire community. We’ve produced materials in English and Spanish to facilitate conversations about safety, and shared information with police officers via this roll call video, and support for traffic stops that are aimed to encourage behavior change with education rather than fines.

We also have a department of equity. My prediction for San Antonio is that we will have a long recovery from COVID-19, and we are so dependent on tourism. But housing and equity is more important now than ever.

VZN: We know how important your leadership is in Texas. 10 people are killed on roads every day in the Lone Star State and November 7, 2000 was the last day that there were no fatal crashes. San Antonio has just been taken off the “20 most dangerous cities” – it is now 21st in the nation on the national Dangerous by Design 2019 list for pedestrians. While our attention is on the tragedy of COVID, Vision Zero work is long-term and has such a great impact. What can other cities learn from San Antonio as we work on traffic safety and community public health safety?

SG: My district and a lot of districts around the country were actually built to be resilient for our current times of staying closer to home. Many districts were built with a church, a school and a store within one square mile. We have 16 churches in our district and our community. We have a resilient grid network and are designed to be interconnected. But the City hasn’t invested in the infrastructure – we are missing proper sidewalks, crosswalks, roadside shade trees and other context sensitive design that slows people down.

Now is the time to reinvest in making our neighborhoods walkable and compact and connected. We can imagine that people won’t be traveling as far for work. We can invest in corner stores and small-scale retail, helping people to stay in their communities. Slowing traffic down and making our streets safer is critical to reducing fatality rates and adapting to our new normal.

VZN: Your voice has been one of many across the country speaking out for reduced speeds, which is a key component of advancing Vision Zero, yet oftentimes requires change at the State Legislature that can be challenging. Is San Antonio working to win approval from the State to lower speeds? What has been the outcome?

SG: Every year we have petitioned the state to allow us to reduce prima facia speeds since the City doesn’t have that authority. We need to keep that work up. And in the meantime, San Antonio has changed signal timing to be 25 miles an hour in one of the major thoroughfares with a high number of traffic crashes in my District. I am waiting for results from the City to see the difference this is making We are also working to establish a specific Transportation Department focused on this kind of work.

VZN: We know that leadership in City Councils, the Mayor’s office, and at agencies are so critical to Vision Zero. How will San Antonio and other cities keep the issue of safe mobility as a top priority even in spite of so many pressing issues? 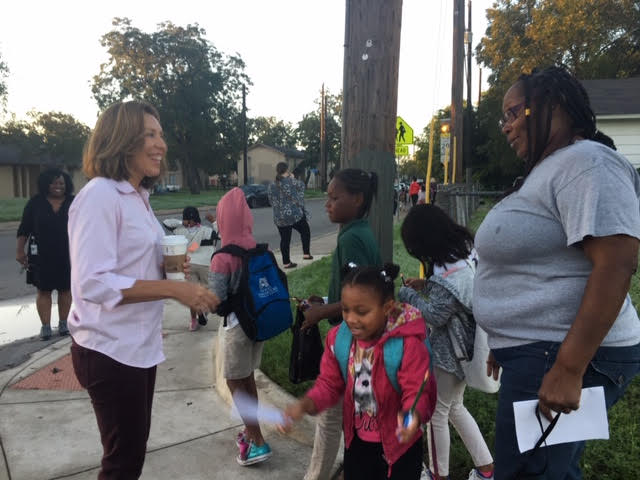 SG: We need to keep community groups motivated and involved. I know that Los Angeles is supporting community-based organizations and I have recommended similar work with church groups and neighborhood organizations. As councilmembers, we need to support the community. These groups support Vision Zero; especially where they see examples of traffic calming and a reduction in crashes.

We were on the verge of putting a 1/8th cents sales tax to go toward transit, set to go on the ballot in November and it was really exciting. That will be on hold. But I hope we can still move to a bond in 2022 to support work on transportation, parks and other infrastructure. And in the meantime, the work to improve bike lanes, maintain streets and fill in sidewalk gaps is as critical as ever. We know that these projects help to save lives.

Thank you for your leadership in San Antonio and beyond! As described in our Core Elements for Vision Zero, Vision Zero is making a difference due to leaders like you who make public, high-level and ongoing commitments with real accountability.