2016 was a monumental year for Vision Zero across the United States.

The number of cities committing to Vision Zero more than doubled, and interest in adopting meaningful, action-driven policies for safe streets has spread from a few early-adopter, big, coastal cities to communities large and small across the country.

Leadership around Vision Zero in the U.S. is growing more diverse, with city officials and staff joining grassroots community leaders in the call to end the tragic and unacceptable deaths resulting from traffic. There is much to be proud of in 2016 and good reason to believe that the epidemic of traffic deaths is finally drawing the attention and action it deserves.

Vision Zero efforts could not be ramping up at a more urgent time. The traffic death toll in 2015 was alarmingly and unacceptably high, bringing the largest percentage increase in fatalities since the 1960s. And all indications are that the lethal trend continued in 2016. While macroeconomic trends are most likely the leading culprit of the increase (traffic deaths predictably rise in times of cheap gas and low unemployment), this does not diminish the suffering of the victims nor need for urgency and action from leaders at all levels.

As we roll into 2017 with a challenge that is as big as ever, it’s helpful to look back at the trends — both promising and troubling — that shaped Vision Zero progress in 2016:

Cities have long been hotbeds for innovation in the United States, whether it’s in business, art, culture, or safe street design and policies. While we’re pleased to see Vision Zero being taken more and more seriously at the regional, state, and federal levels, it’s fair to say that cities are still the most advanced champions and leaders of Vision Zero across the country. As of this writing, 22 U.S. cities have committed to Vision Zero and are expected to significantly transform their policies and practices to align with true safety-first values.

Unprecedented Federal-Level Acknowledgement of the Problem

For the first time in history, the nation’s largest and most influential governmental transportation agencies adopted a goal of zero deaths on American roadways. Called Road to Zero, the new effort is being led by the heaviest hitters in national transportation policy: The United States Department of Transportation, Federal Highway Administration, and Federal Motor Carrier Safety Administration, and the National Safety Council. While the funding commitment is modest to start and questions remain about how this initiative will fare under a new presidential administration, we are nonetheless optimistic that this notable shift in attention will be more than symbolic and result in some much-needed progress at the federal level. And we’re proud that the Vision Zero Network is part of the core Steering Group helping to focus on action and results. 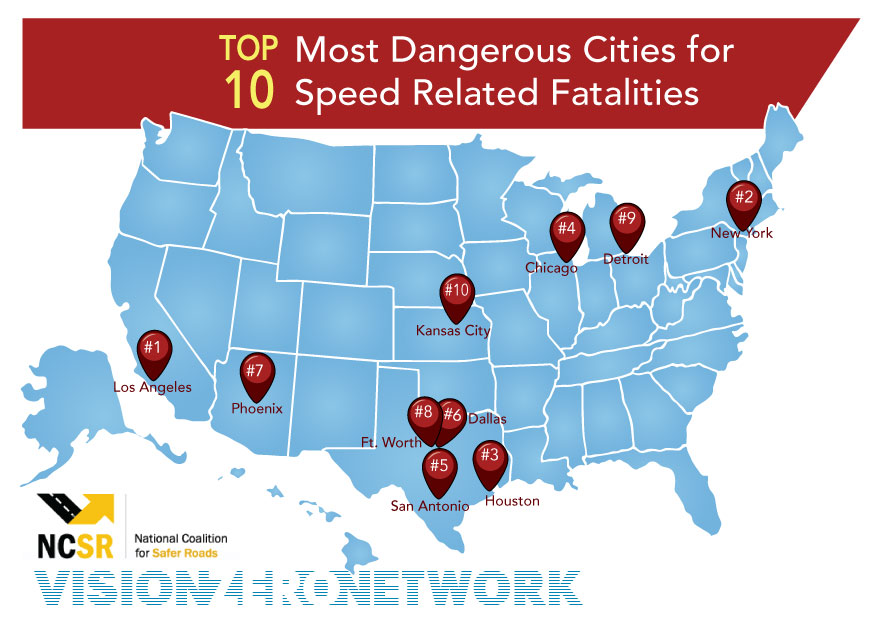 Following the Vision Zero tenet of being data-driven in assessing the greatest safety problems, managing auto speeds rose to the forefront in 2016 as a critical action for communities pursuing zero traffic deaths and severe injuries. Following in the footsteps of New York City, both Seattle, Washington and the State of Massachusetts passed laws enabling lower speed limits, while many other jurisdictions are actively pursuing similar changes. We know that changing signage alone will not necessarily influence speed, but these important legal changes are part of the solution, along with prioritizing lower-speed, context-sensitive roadway designs and employing proven automated speed enforcement technologies. This focus on speed management is not simply part of a strategy. It’s a fundamental element of any serious Vision Zero work.

Bringing Equity and Inclusiveness to the Foreground

New data, focus, and a series of high-profile tragedies brought systemic racism and injustice to the foreground of American thought in 2016. In the traffic safety context, this challenged the movement’s leaders to address the role of Vision Zero in systemic racial bias, particularly as it relates to traffic law enforcement. While it is clear that there is still a tremendous amount of work to do to ensure equitable Vision Zero outcomes, we can at least be hopeful that city leaders and advocates are beginning to more openly discuss and consider the equity implications of our traffic safety work. Recognizing that some communities are disproportionately impacted by traffic violence — including people of color, low-income people, seniors, children and people walking and bicycling — is the first step to elevating the core issue of equity in Vision Zero work in the coming years.

Several 2016 reports by respected organizations such as the Centers for Disease Control and Prevention and the National Highway Traffic Safety Administration crunched the latest data and found sobering indications that the U.S. is slipping behind its global peers when it comes to ensuring the safe mobility of its residents. To offer perspective, if the U.S. had performed as well as its neighbor Canada (let alone the world’s safest countries such as Sweden and the Netherlands), approximately 18,000 more Americans would have survived in a single year, 2013. The message is not that it’s hopeless; it’s that we have global company in facing this challenge and a lot of successful models to learn from. Globally, traffic violence claims nearly 1.2 million lives per year and is one of the leading causes of death of young people. But many nations have counted steadily declining traffic deaths through strong policy leadership, smart design decisions, and organized, data-driven campaigns. The U.S. can — and must — do the same.