2018 started with encouraging news from the nation’s two longest-running Vision Zero programs, New York City and San Francisco, both of which reported significant progress in their efforts to prioritize safe mobility for all. 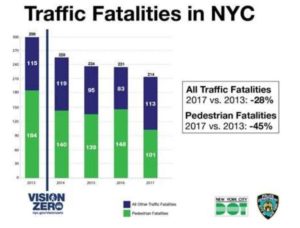 In San Francisco, the number of traffic deaths decreased 41% – from 34 to 20 between 2017 and 2013, the year before Vision Zero started. Fatalities of people walking fell 34% in the same period, also a historic low. 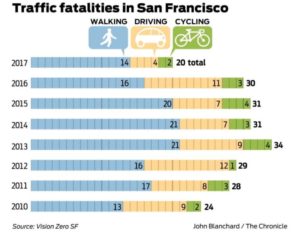 While we certainly should not celebrate too soon, as even a single loss of life on our streets is too many, it is encouraging to see the longest-running Vision Zero programs in the nation trend in the right direction. This is especially true at a time when the nation saw the number of traffic deaths increase 14% between 2014 and 2016 to 40,000 – the highest number in at least a decade – and 4.6 million more injured.

We commend NYC and San Francisco for their leadership in investing in changes to roadway designs, policies, city-run systems, and messaging that are making a difference.

In New York City, City leaders credit the positive results to such investments as:

– Implementation of 114 traffic safety projects in 2017 – with 75 in priority locations, or areas that disproportionately account for fatalities and severe injuries among people walking;

– Installation of 180 miles of dedicated cycling space since the launch of Vision Zero;

– Lowering of the citywide speed limit from 30 mph to 25 mph;

– Kickoff of wide-ranging education campaigns such as the Dusk and Darkness initiative, which succeeded in reducing pedestrian deaths 26% during the 2016-2017 initiative launched in October and ending in February.

“Not even a single tragedy on our streets is acceptable, and we’ll keep fighting every day to protect our people,” NYC Mayor Bill de Blasio

“Vision Zero is working,” said NYC Mayor Bill de Blasio. “The lower speed limit, increased enforcement and safer street designs are all building on each other to keep New Yorkers safe. Now we must deepen this work. Not even a single tragedy on our streets is acceptable, and we’ll keep fighting every day to protect our people.”

NYC’s Transportation Alternatives’ Executive Director Paul Steely White added: “That fatalities have fallen for a fourth straight year in New York — at a time when traffic deaths are on the rise across the nation — is a testament to the City’s commitment to Vision Zero.”

More projects and quotes from New York City leaders can be viewed in the City’s press release.

In San Francisco, City leaders credit the positive results to such investments as:

– Installation of safety improvements on 77 miles of roadways in 2017, 34 miles of which are located within the city’s High Injury Network, where 13% of streets account for 75% of its severe and fatal traffic injuries;

– Focusing on reducing excessive speeding, the number one factor in traffic fatalities and injuries on San Francisco streets, with an emphasis on roadway re-designs, education campaigns, and promoting a safety camera program to encourage safe speeds;

“This is not a victory lap. The only acceptable number is zero,“ SFMTA Sustainable Streets Director Tom Maguire

The historic low “is hopefully just the beginning of a very long-term decline in fatalities,” said Tom Maguire, the San Francisco Municipal Transportation Agency’s Sustainable Streets Director. “This is not a victory lap. The only acceptable number is zero. It’s going to take a continued commitment from everyone in the city to build on this progress year after year.”

Walk San Francisco’s Policy and Program Director Cathy DeLuca reiterated the sentiment that more work is needed. “Twenty lives lost is too many. One is too many. We can get to zero. With increased investment and quicker project delivery, we can build on this momentum and reach our goal by 2024.”

Moving Ahead to Zero

This news of life-saving progress in the earliest-adopter Vision Zero cities should be inspiring to communities across the nation, especially the more than 30 cities that have followed in New York’s and San Francisco’s footsteps by committing to Vision Zero.

NYC’s and SF’s record improvements show that a strong commitment to Vision Zero principles and actions do indeed make a difference in keeping people safe. As we look ahead, we know that much work remains to be done to ensure that this short-term, positive trend becomes a long-term reality in ensuring safety for all.

Read the Vision Zero Network’s recommendations for how communities can step-up their efforts in 2018 to move from vision to action to reach zero.

PREVIOUS STORYNEXT STORY
When Lowering Speed Matters Most – Successful Strategies from NYC and ChicagoVision Zero in 2018: Growing & Measuring a Transformative Vision for Safety