In the wake of appalling violence in Minnesota, Louisiana, and Texas during the past few weeks and swelling racial tensions nationwide, a spotlight is shining on systemic inequities in our nation’s law enforcement system. These tragedies are influencing our thinking across the country.

Personally, I am thinking differently about Vision Zero. Not only as it relates to law enforcement, but also in other ways that U.S. communities are interpreting and implementing Vision Zero efforts as they relate to social justice and equity.

Admittedly, at this point, I have more questions than answers. I acknowledge that I feel uncomfortable talking about some of these issues, and that I’m far from being an expert in this area. Yet I do feel a responsibility, as the leader of the Vision Zero Network, to share my concerns, including places that I think Vision Zero may have misstepped early in its short history, and to look for solutions.

I started the Vision Zero Network just over a year ago with the goal of helping U.S. communities adopt and effectively implement Vision Zero commitments to eliminate traffic deaths and severe injuries for all road users.

It’s the “all” part that has always excited me most. All of us have the right to safe mobility, whether we are walking, biking or driving; whether we’re poor, rich or in between; regardless of our age, background, race or ethnicity. My thinking on Vision Zero has been largely shaped by my own experiences walking, biking and riding transit and sometimes feeling marginalized, mistreated and even afraid for my safety. But as a white woman of privilege, I acknowledge the limitations of my vantage point. My recent experiences with Vision Zero have helped me better understand how so many communities are systemically underserved by our current transportation systems, policies and culture. This is particularly true for low-income people, people of color, children, senior citizens and people with disabilities, all of whom suffer from traffic violence at disproportionately high rates. 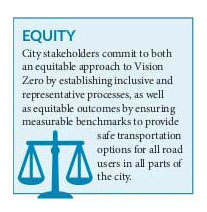 I believe that, at its core and done right, Vision Zero is all about advancing equity. The question for all of us is: How do we do it right?

At its best, Vision Zero’s data-driven, systems-based approach can bring increased and overdue resources, action and political will to communities that have been neglected. Much evidence exists that low-income neighborhoods and communities of color have been underserved in terms of traffic safety efforts, such as investments in safe places to walk, drive, and ride bikes. Vision Zero is bringing more attention and public and political urgency to address these wrongs. This is encouraging.

At the same time, Vision Zero can also be a threat to a more equitable society. The same emphasis on a data-driven approach may justify focusing traffic law enforcement in certain neighborhoods that are experiencing high levels of traffic violence. Yet these are often the same neighborhoods and involve the same communities experiencing the greatest tensions with police. So, while our goal in Vision Zero is to increase safety from a transportation perspective, we run the risk of promoting over-policing in a harmful way and contributing to the disintegration of trust between police and the communities they serve. Experience and research tell us the communities that suffer the most from traffic violence also stand the greatest chance of being subject to inequitable traffic enforcement. We need police to be empowered to enforce traffic laws to save lives. But how can we be sure that we’re not contributing to a bigger problem?

I believe we may be doing a disservice by letting the well-recognized “E’s” of America’s traditional traffic safety approach overly influence our crafting of Vision Zero priorities and communications. These E’s traditionally include engineering, enforcement, education and evaluation; sometimes they also include engagement and emergency services; and many of us are working to add equity to that list.

The convenient ‘E’s meme to communicate about street safety was first conceptualized in 1915, but much has changed in the last 100 years. Vision Zero’s call for a deeper level of systems thinking and a more holistic approach is a rejection of the compartmentalized thinking the E’s perpetuate. Vision Zero presents the opportunity for us to critically examine which tools in which contexts most effectively improve the safety of the transportation system, regardless of what letter the tool starts with.

I acknowledge that I don’t understand well enough the efficacy of traditional, officer-initiated traffic enforcement efforts in deterring dangerous behavior, particularly as compared to other types of strategies. Officer-initiated traffic enforcement as a tool to reduce traffic violence should be studied and scrutinized just as we would study the efficacy of a corner bulb out, speed hump or communications campaign. And whatever its efficacy, that should be weighed against its costs. These costs include the fact that traffic stops offer a significant opportunity for officer discretion, which in rare but unacceptable circumstances, can result in racial bias.

However many E’s you count, one thing is true: Not all E’s are created equal. I’ve been emphasizing this in just about every Vision Zero presentation I’ve made around the country. But, I realize, we haven’t done enough on that point, and enforcement has taken on a larger-than-merited role in our efforts and messaging. We need to re-think and address this.

I’m not asserting that there is no role for enforcement in traffic safety, of course. There is. I want to express strongly that I believe we have reason to be confident in and deeply grateful for the overwhelming majority of fair and equitable law enforcement efforts in this country, including in the realm of traffic safety. I’m truly impressed by the officers I’ve gotten to know through my Vision Zero advocacy work in San Francisco and around the country. The vast majority of officers deserve our deep respect and thanks, including for their traffic safety work and their increasing commitment to Vision Zero.

Part of the problem is that we too often look to police to deal with problems that we have been too politically cowardly to solve before they get to the point of enforcement. From a traffic safety perspective, this includes relying on enforcement too much and not being bold and brave enough in other areas, such as designing streets and setting policies that truly prioritize safety.

Take speeding, which is the greatest risk factor in the severity of injuries during a crash. Instead of investing in the front-end street designs that invite and encourage drivers to travel at a safe speed, we rely on police to enforce laws that are too easy to violate because the infrastructure and policy don’t match the desired behavior. For instance, most states in the U.S. do not allow cities to set appropriate speed limits, even in places where significant numbers of people walking and bicycling are mixing with higher-speed cars, including in school zones. And most states do not empower cities to use automated speed enforcement, which has been proven to reduce fatal crashes by up to 70%.

Traditional officer-initiated enforcement should be a tactic of last resort in traffic safety efforts, not the first line of attack. No amount of police presence can overcome road designs and policies that simply don’t work well enough.

A Second Misstep: Failing to Build Diverse, Representative Support From the Start

A second misstep I think we’ve made in launching Vision Zero in the U.S. is that we did not take the time to ensure, from the start, that this movement prioritize inclusiveness and diverse representation. If we had, I think we would have done some things differently.

To be clear, many cities’ Vision Zero efforts are integrating equity priorities and making great inroads in elevating voices and concerns of communities that haven’t traditionally been at the transportation planning/safety table. I feel encouraged to see so many more meaningful partnerships forming in cities around the country between traditional bicycle/pedestrian advocates and leaders in communities of concern.

But it has not been enough. For instance, I know that I’ve been guilty of not taking seriously enough the concerns some people have shared (and thank you for sharing) about Vision Zero inadvertently adding to the burden of inequitable enforcement, not only from the racial profiling perspective but also related to the disproportionate burden of traffic ticket costs on low-income people.

I acknowledge that during the early days of rushing to maximize the budding Vision Zero political momentum around the country, I reflexively thought, “that’s important….but we’ll come back to it later.”

I’m coming back to it now. Not with all — or perhaps any — of the answers, but with questions and a commitment to do better. I’m not sure what that will look like, but I’d appreciate suggestions and help from others who value safe mobility for all. And I commit to positioning equity front and center in our work at the Vision Zero Network.

For the hard-working advocates and government staff advancing Vision Zero in their communities, I’d encourage you, too, to step back and think about how the enforcement ‘E’ fits into your work.

And ask some questions: What are we expecting from traditional, officer-initiated traffic enforcement? Do we know the benefits and costs? What unintended effects might there be? How are we valuing true equity in our everyday Vision Zero work? Are we being honest and transparent about how we’re doing in regards to prioritizing equity in Vision Zero, even when we misstep? Who should we be talking with, learning from, and partnering with to better reflect the communities most impacted by traffic violence? What can we do better tomorrow? Over the next month? Over the next year?

8/31/16 Update: For more on this conversation, listen to this excellent podcast from Why Isn’t Anyone Talking About This?

We’ve found these resources to be helpful primers on the complex subject of equity and Vision Zero:

Racial Inequity in Law Enforcement, by Marco Connor, Transportation Alternatives (New York)
At the Intersection of Active Transportation and Equity, from the Safe Routes to School National Partnership
Campaign Zero
Why Isn’t Anyone Talking About This? Episode 5: Vision Zero (podcast)