Vision Zero Growing in the South

If you look at our map of Vision Zero communities, you’ll notice a lot clustered around the east and west coasts in mostly urban communities. This has fostered a misimpression that Vision Zero is a big-city-only approach limited to the “usual suspects.”

But, increasingly, more and more communities in southern states including Georgia, Florida, North Carolina and Virginia are making Vision Zero commitments. This is especially encouraging given the strong need in the region. In fact, three of these states are in the top ten list of states with a high pedestrian danger index, according to the Dangerous by Design report.

The high risks of injury and death, especially to those walking and biking in these southern states, as well as interest in creating sustainable, green and economically strong communities, has spurred places such as Macon, Georgia, Richmond, Virginia, Orlando, Florida and Charlotte, North Carolina to commit to Vision Zero. This is how some of these communities are bucking the impression that Vision Zero is only for dense, urbanized cities and showing how Vision Zero is an approach that can fit any size or style of community.

Macon-Bibb County (aka Macon), Georgia: When Georgia’s percentage rise in pedestrian fatalities surpassed the country’s, Vision Zero Network Advisory Committee member, Bob Dallas, spurred to action calling for the adoption of a Vision Zero approach. Dallas, a former director of the state’s Governor’s Office of Highway Safety, was the right person to call attention to the measures that could save lives. His advocacy helped create the state’s first Pedestrian Safety Review Board in 2015, charged with evaluating pedestrian fatalities in Macon-Bibb County and recommending safety solutions to prevent future crashes.

In November 2018, the board committed to Vision Zero to make the transportation network safer for all. Since then, Vision Zero has been endorsed by the Bibb County Board of Health and the Macon-Bibb County Commission and is recognized by the Vision Zero Network as a Vision Zero City.

An early mandate for the Pedestrian Safety Review Board was that it include representatives from the mayor’s office, sheriff’s office, facilities management, traffic engineering, administrator of the health department and two “citizens from the community” – exactly the sectors and representation encouraged to lead strong Vision Zero efforts. Since its creation, the board has grown to 23 members (from a required minimum of nine) and meets monthly.

What they’ve accomplished so far in Macon:

Richmond, Virginia: An average of a dozen deaths and 2,700 injuries occur on the streets of Richmond, VA each year. To address this public health epidemic, Mayor Levar Stoney signed a pledge in October 2017 to make Richmond a Vision Zero City. The pledge is a component of the Mayor’s Safe and Healthy Streets Challenge which emphasizes seat belt use, avoidance of distracted and drunk driving, sharing the road and obeying posted speed limits. The Challenge is codified in Richmond’s Safe and Healthy Streets Resolution. Richmond has also been recognized by the Vision Zero Network as a Vision Zero City.

In just under two years since Richmond committed to Vision Zero, it has embarked on an ambitious schedule of speed management initiatives. In this short time, the City has been recognized and awarded for its holistic and actionable Vision Zero Action Plan.

What they’ve accomplished so far in Richmond:

Orlando, Florida: The Orlando region, along with the entire state of Florida, has the unfortunate distinction of being the most dangerous to walk in all of the U.S. according to Smart Growth America’s 2019 Dangerous by Design report. Sadly, Florida, and many of its cities and metro regions, have topped the list of most dangerous places for pedestrians for several consecutive years. 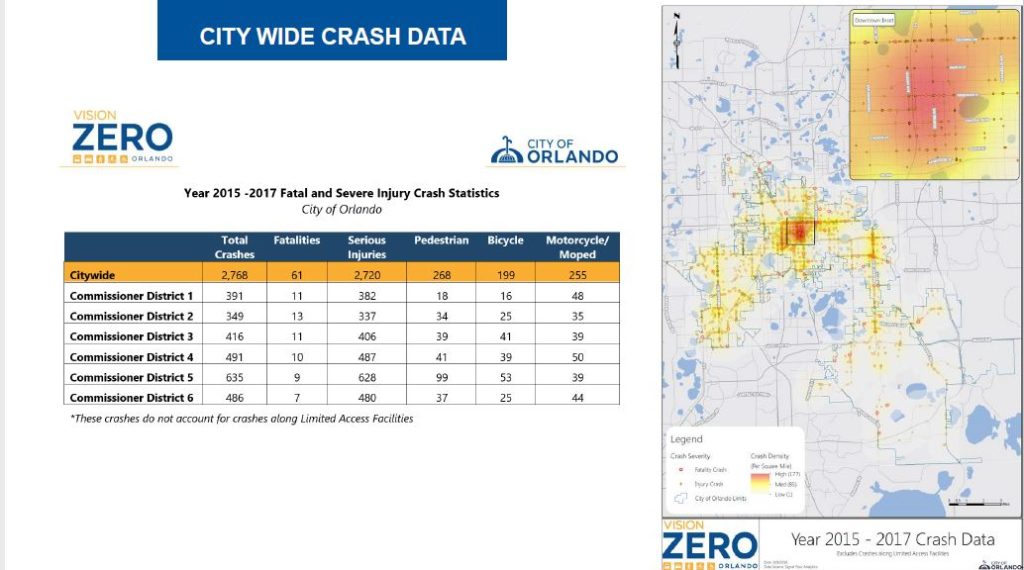 What they’ve accomplished so far in Orlando:

Charlotte, North Carolina: In 2017, despite drivers in Charlotte driving one million miles more than the previous year, traffic crashes had decreased by four percent. Sadly, those crashes resulted in a 35% increase in fatalities that same year. According to Charlotte’s recently released Vision Zero Action Plan, people walking and bicycling were involved in less than three percent of all crashes, but accounted for 44 percent of fatalities.

Charlotte also analyzed its crash data and determined that of the 10% of streets in the HIN, 66% of them are arterial streets and 25% are local streets.

What they’ve accomplished so far in Charlotte: