SAVE THE DATE: World Day of Remembrance for Traffic Victims 2017

As awareness of the alarming numbers of traffic deaths in the U.S. has spread across the country, so too have events commemorating the International World Day of Remembrance for Road Traffic Victims. Without a doubt, the majority of these tributes are organized by Vision Zero city advocates, and friends and family members who have lost loved ones to traffic crashes. Their growing numbers are standing up to say “Enough is enough” and demanding change to end one of the leading – and preventable – causes of death.

The World Day of Remembrance is an international event and was adopted in 2005 by the UN General Assembly to acknowledge victims of road traffic crashes and their families. It is commemorated the third Sunday of November each year to pay homage to the 1.25 million people killed and injured on the world’s roads, and more than 40,000 killed in the U.S.

Last year’s events across the country – from Seattle to Boston – were truly inspiring, given the numbers of voices raised and activities organized. 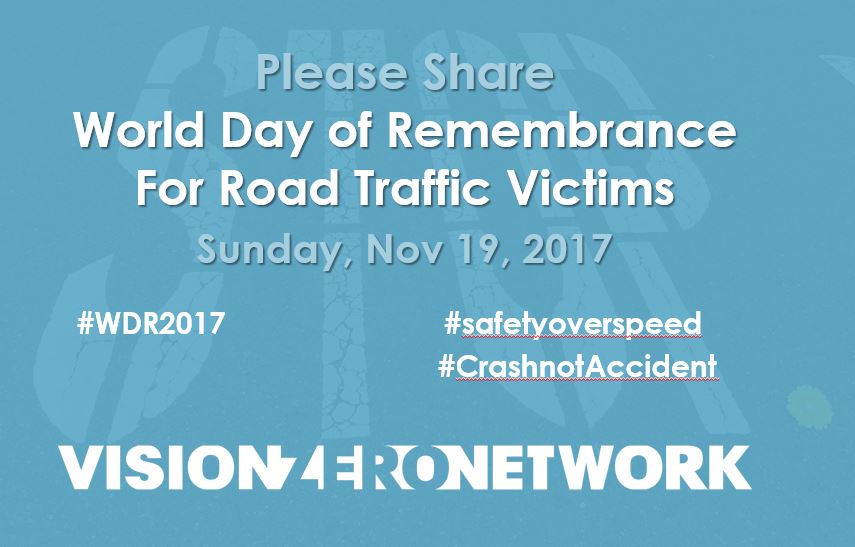 We urge community leaders to leverage the opportunity of World Day of Remembrance to commit to prioritizing #safetyoverspeed, and advancing Vision Zero and safe mobility for all. Mark  your calendars and consider participating in local commemoration ceremonies. If these aren’t available, honor the day with us through social media with #WDR2017, #Crashnotaccident, and #safetyoverspeed.