Webinar Recap: Measuring Vision Zero from the Outside

Effective advocacy requires keeping our elected leaders accountable to the vision and goals they set for our communities. With Vision Zero taking hold in more than 40 U.S. communities, advocates on the ground have a big task in helping to ensure their local leaders are holding true to the goals and timelines adopted to ensure safe mobility for all road users. Fortunately, we can learn from the strong advocacy happening in Denver, Boston and Cambridge, where community leaders are leveraging tools of transparency and effective measurement to hold their leadership accountable and focused on Vision Zero progress.

In our webinar, Measuring Vision Zero Progress: Advocacy Examples from Denver and Boston, we spotlight the efforts of two advocacy organizations – WalkDenver and LivableStreets Alliance – that measure Vision Zero progress in their cities. [Note: these reporting tools are released as part of the larger coalition efforts of Denver Streets Partnership and Massachusetts Vision Zero Coalition.] Using annual report cards or progress reports, each organization calls attention to progress toward Vision Zero goals, such as miles of bike lanes built, number of pedestrian crossings added, type and quality of data collection and public reporting.

WalkDenver, which worked closely with the City of Denver to develop its 2017 5-year Vision Zero Action Plan, 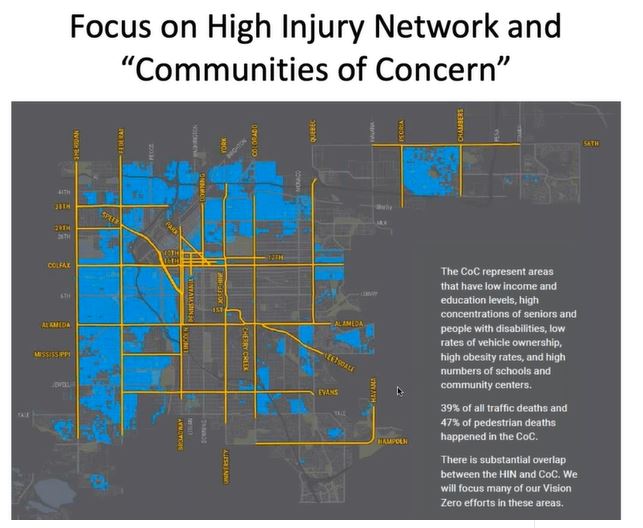 developed their 2018 report card around one of the Action Plan’s most fundamental themes: Build Safe Streets for Everyone. The report card focuses on Denver’s High Injury Network and Communities of Concern in order to determine the impact of key Vision Zero goals on traffic fatalities. Half of Denver’s traffic fatalities occur on just 5% of the city’s street network.

While WalkDenver issued an overall letter grade of “C” on the City’s first year of Vision Zero implementation, the advocacy group also noted the City was “short-staffed” in a fair assessment of limited capacity impeding Vision Zero progress. WalkDenver released the report card at a press event showcasing pedestrian improvements implemented by the City. One key outcome of WalkDenver’s report card – the City realized it needed to improve its internal processes for measuring the impact of the infrastructure investments being made.

Boston and Cambridge Get a Vision Zero Review 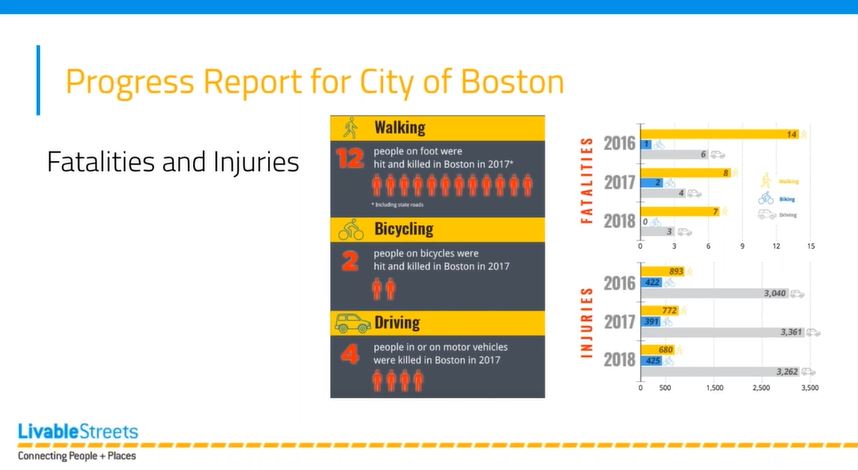 The LivableStreets Alliance was creative and flexible in their annual Vision Zero progress report. Instead of using letter grades for their inaugural review, the group used a dial to reflect different levels of progress and areas of improvement. But for the second year analysis, the group switched strategies. The City of Boston had not yet reviewed its first year Action Plan progress and LivableStreets didn’t want to report on the City’s original action plan again. Instead, the advocacy group used a different model for evaluation than their original progress report format – Guidelines for Creating an Effective Vision Plan, which they helped develop in partnership with the Vision Zero Network. 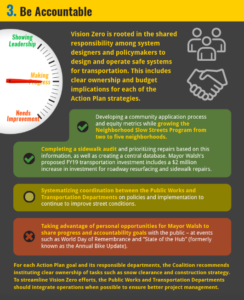 LivableStreets released their second progress report on Boston’s Vision Zero program during the City’s annual budget season to keep pressure on the mayor and administration. Additionally, city council members were briefed on the report card in advance of the Boston Transportation Department’s budget hearing. The outcome of this direct advocacy on behalf of Vision Zero in Boston was impressive: $5M more in the Department’s budget and 20 additional transportation staffers providing some additional focus on Vision Zero.

Although the group had already established a model for measuring Vision Zero progress with their review of Boston, they switched gears in Cambridge. Cambridge’s strong leadership, solid political will and internal review of areas of improvement provided a different context for progress reporting. Instead of LivableStreets leading on a progress report for the City, Cambridge approached the advocacy group to partner on its upcoming update. 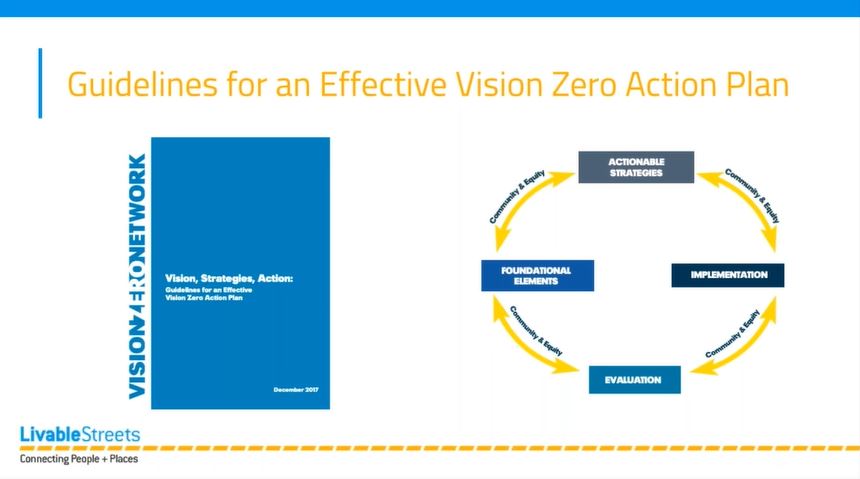 The upcoming progress report will combine the City’s status update with LivableStreets’ progress report format while also using the Guidelines for Creating an Effective Vision Zero Plan. One benefit of this collaboration is being able to work directly with Cambridge to identify next steps in the progress report as opposed to the advocacy group issuing recommendations to the City (as it did for Boston).

Coalition efforts: While the webinar highlighted two organizations, both presenters are part of larger advocacy coalitions – WalkDenver is part of the Denver Streets Partnership and LivableStreets Alliance is part of the Massachusetts Vision Zero Coalition – that advance and monitor Vision Zero progress. Working in coalition strengthens advocacy, education, outreach and impact.

Relationships key: Both WalkDenver and LivableStreets Alliance emphasized the importance of maintaining productive and positive relationships with their city’s staff. Their report cards were not intended as “gotcha” mechanisms, but rather as opportunities for discussion and improvement. In fact, both advocacy groups indicated their intention to foster partnerships with city staff at all levels within an agency. They encouraged this partnership by meeting with staff often as they developed and refined their progress reports, sharing their methodology and soliciting feedback on early drafts. They also emphasized the importance of lauding the areas that are working well in the city’s Vision Zero efforts. And they stressed that it’s important to show appreciation for the staff themselves, who are on the frontlines of this work, recognizing that often times the problems exist at the leadership level, not at the staff level.

Work, work, work: Development of these reporting tools takes a lot of time and labor but the outcome is valuable to the work. Advocacy organizations have a key role to play in reporting information as a third party that is not a mouthpiece for an agency and which authentically represents challenges and progress. Achieving balance on both fronts is critical to the legitimacy of the reporting tool.

Both organizations also noted how their hard work resulted in increased media attention to traffic fatalities, injuries and unsafe street conditions. They also explained these evaluation tools serve an ongoing purpose of educating the public well after the initial release.

Focus required: Many nonprofits engage in advocacy often with limited staff capacity and limited budgets. Be clear about what is most important to review, and explain why. For instance, WalkDenver focused on one of five of the city’s Action Plan’s most fundamental themes: Build Safe Streets for Everyone and then identified three key areas for review (completion of targets, location of improvements, quality of the action).

We commend the work of WalkDenver and LivableStreets Alliance for their smart, effective advocacy in encouraging accountability in their cities’ Vision Zero efforts. We encourage other community leaders to use these examples as templates to measure and educate stakeholders about Vision Zero priorities and progress.