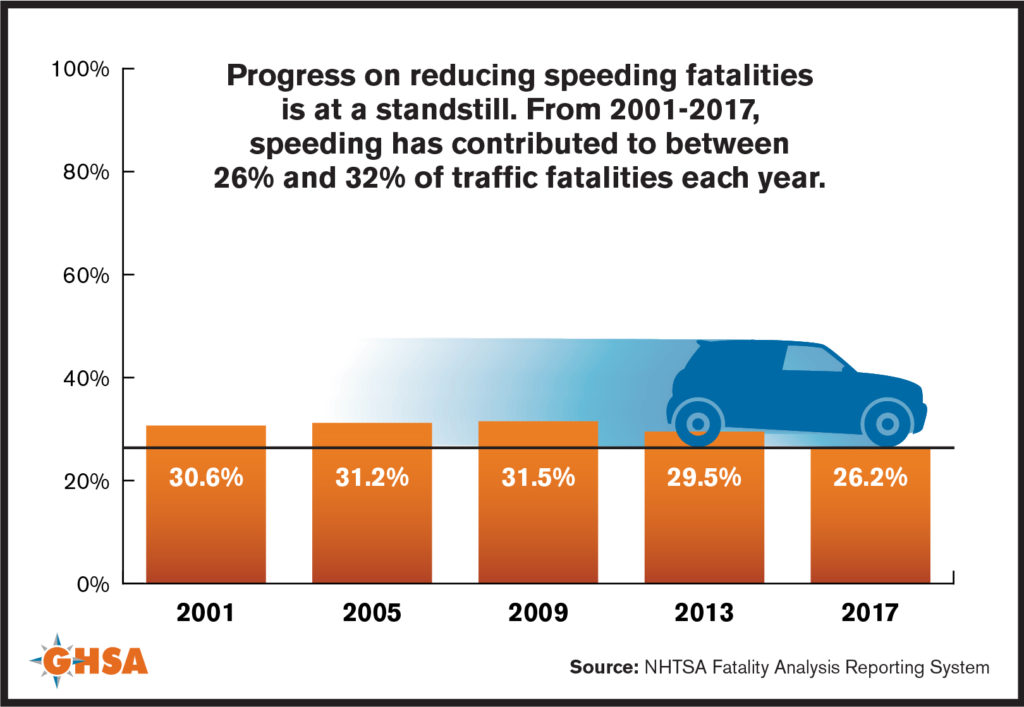 What is one critical strategy to advancing Vision Zero that is often forgotten or ignored? The answer is clear: managing speed for safety. Data and experience show it. As does a compelling new report released by the Governors Highway Safety Association (GHSA), which we are pleased to feature in our latest webinar “Rethinking Speed Management for Safety: A Fresh Look, Proven Strategies.”

With nearly 10,000 people killed in speeding related incidents in the U.S. — roughly one-third of all traffic fatalities — one would think a national crisis would be declared by every transportation and public health agency. After all, these agencies (and others) have mounted effective, life-saving campaigns toward other well-known safety problems such as curbing drunk driving, which kills a similar amount of people each year and increasing seat belt use, which has improved dramatically in part thanks to government-led efforts.

Instead, GHSA points out during the one-hour discussion, to a large degree, “speeding remains a publicly-accepted driving behavior.” This stems, in part, from a lack of acknowledgement and attention from our leaders — ranging from the federal, state and local levels — to use the proven policy and system levers that exist to make real change. For instance, we know (based on what has worked in the U.S. and around the world), that strategies related to roadway design, technology, legislation and education and enforcement efforts can be effective in shaping people’s behaviors to drive at safe speeds. Yet, many of these strategies sit untouched or even expressly off-limits due to outdated policies or lack of attention. 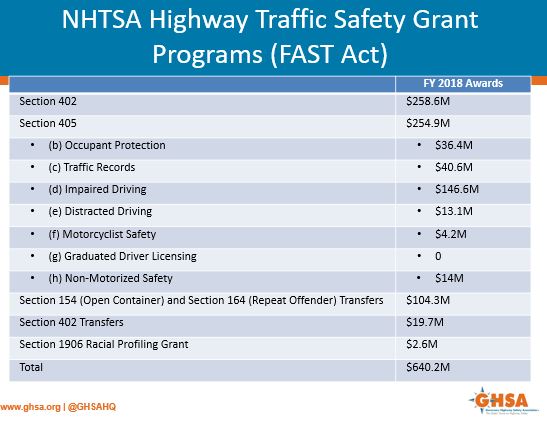 As an example of where federal and state programs, specifically, could be making more of a difference in addressing the pervasive problem of speed, GHSA shared this chart showing categories of safety funding that the National Highway Traffic Safety Administration (NHTSA) makes available to states. Though speeding is a factor in nearly one-third of total traffic fatalities, it does not even qualify as a category of this important safety funding pot.

At the state level, local communities wanting to manage speed are often stymied by restrictive state laws that may (a) prohibit or set up cumbersome restrictions to lowering local speeds for safety (b) restrict the use of proven automated technology, such as safety cameras (which, notably, also cannot be funded with federal funding); and (c) limit roadway design options, even those strategies proven to improve safety. In fact, a surprising number of states are actually raising their speed limits, despite ample evidence showing this will lead to more crashes, injuries and deaths.

While the problem of speed is not yet drawing the attention and resources it deserves from many levels of government, there is a growing movement of earnest and steadfast advocacy to change this. Just as Mothers Against Drunk Driving (MADD) organized to dramatically change the way our nation approaches drunk driving — from politicians to police to the general public — we are encouraged to see community advocacy put the problem of speed in a similar spotlight. Families for Safe Streets, started in NYC in 2014 to support victims of traffic violence, has expanded to nine chapters across North America. These small but passionate groups are working to change laws, lower speed limits, add safety cameras and educate policymakers about the urgent need to prioritize safety over speed. Can we help groups such as Families for Safe Streets grow and amplify their messages — as did MADD and advocates for gun safety? We can and we must.

Also, a growing number of cities — especially Vision Zero communities — are stepping up their leadership and actions to tackle the problem of high speeds in a more holistic way. They are not waiting for state or federal leadership to save the day, but rather are taking matters into their own hands. Exemplary models include Boston, which recently advocated to win approval from their state legislature to lower speed limits citywide from 30mph to 25mph. This change over the past year has been proven to decrease travel speeds to safer levels (especially for vehicles traveling faster than 35 mph, which is most dangerous). Read about Boston’s work and the IIHS study that documented their success here.

Portland, Oregon has one of the nation’s most robust and comprehensive speed management programs. (Read more here in our extensive case study.) As a core strategy of their Vision Zero plan, Portland lays out clear actions (and ways to measure effects) for a Safe Systems approach to managing speed. This includes using data to identify where speed is most problematic, then focusing their resources to those areas with the appropriate measures, including roadway redesigns to discourage high speeds, lowering speed limits and judicious use of safety cameras. Notably, Portland’s program sets a high value on recognizing the need to ensure its speed management strategies (along with other Vision Zero work) takes an equitable approach that does not disproportionately or negatively impact certain communities that have been traditionally underserved or harmed in the systems. This includes close attention to monitoring enforcement efforts to prevent racial profiling or disproportionate impact on communities of color and low-income communities.

New York City has made tremendous progress in its Vision Zero work — reducing traffic deaths to the lowest level in more than a century — in large part thanks to its focus on speed management. These include lowering the speed limit from 30mph to 25mph; extensive public education campaigns around speeding; adding safety cameras around schools; and significantly boosting its street redesign efforts to prioritize safety over speed on the most problematic streets.

But despite these inspiring local efforts, the lack of a national campaign focused on unsafe speeds undermines the urgency of the problem. A cohesive national message and funding are needed to make real change. Think seatbelt laws and the “Click It or Ticket” campaign; drunk driving and MADD; or, more recently, “U Drive. U Text. U Pay.” This is a clear area where change is needed. With the reauthorization of the federal transportation bill next year, we have the opportunity to demand safety is prioritized across all federal transportation programs and guidance.

Read more about the Vision Zero Network’s assessment of what leadership and action is needed at the federal, state and local levels to treat the problem of speed with the life-saving attention it deserves.

What’s Next? And What Can You Do?

If you care about this issue, we urge you to read the new GHSA report. Then identify and advance the most-needed strategies in your community. Send the report with your recommendations to influencers, including city electeds, state legislators and leaders at your state’s office of traffic safety and transportation departments. Set up meetings with them to find out about their speed management strategies or, if lacking a plan, work with them to develop one for the sake of saving lives.

Also, consider participating in the upcoming speed forum strategy session hosted by GHSA and the Insurance Institute for Highway Safety. This event is free and open to the public to develop and advance explicit strategies and pilots to manage speed for safety.

If you’re interested in speed management and publications on other safety topics, there are a variety of resources available:

Despite the slow pace of progress, we can always find inspiration in communities across the U.S. who are leading towards progress and in the many national groups like GHSA that are increasing attention to this national crisis.

Watch the webinar below and learn more from the discussion.

PREVIOUS STORYNEXT STORY
Time for Feds, States to Get Serious About Speed Management (or, at least, step out of the way of progress)San Francisco Raises the Notch for Vision Zero in New Action Strategy: Aiming for Transformative Change