The Vision Zero Network was honored to host a webinar on March 5, 2020 featuring the promising Vision Zero efforts of West Palm Beach, Florida a community of about 120,000 residents, just north of Miami. Watch the one-hour webinar here.

West Palm Beach City Traffic Engineer, Uyen Dang, oversees all elements of the city’s transportation elements, including its Vision Zero work, which kicked off in 2018. The effort boasts a large and active taskforce of about 50 people, including representatives from the regional and state levels, community groups and more.

Dang recognizes the importance of building internal buy-in amongst city leaders and agency staff in advance of working externally to influence the broader culture in the city. Early efforts have included regular staff trainings on Vision Zero, as well as including the topic in orientation for all new staff members. The goal has been ensuring that all city staff understand what Vision Zero means and the importance of their roles. For example, while maintenance may not always be highlighted in the public-facing parts of Vision Zero, West Palm Beach has worked hard to make sure that DPW staff recognize the importance of their part in ensuring facilities are maintained for safety.

West Palm Beach’s Vision Zero work includes efforts centered on education and positive enforcement (mainly high-visibility education campaigns by police rather than notably increasing ticketing), but Dang says their greatest focus is on engineering and managing speed. “If we want safe streets, we need to engineer safe streets,” she says.

Examples include safety improvements in the form of what Dang refers to as “urban acupuncture,” with a focus on making changes more quickly, compared to a more traditional, drawn-out process. One example is S. Olive St. in West Palm Beach, where Dang’s team made changes to a problematic 2-mile stretch of roadway, including re-striping to narrow the travel lanes and adding bike lanes. Together the changes resulted in an 8% decrease of the 85th-percentile-speeds, which was a major goal of the project in order to improve safety for all road users. And the changes were made within 60 days. How did it happen so quickly? Partly, Dang says, because the City used on-call contractors to implement the project, one of the ways to expedite safety improvements.

Another way is by focusing on more pilot projects, which can test ideas and speed up the process from planning- to implementation-stage. This includes West Palm Beach’s first protected roundabout, which is along a well-used biking route.

Shifting to a Systemic Approach

As part of its Vision Zero commitment, West Palm Beach is working increasingly with a systemic approach, which includes not just reacting to site-specific problems, but rather looking at the citywide landscape and how to approach improvements on a broader, systems level.

This includes improving the city’s street light program, given greater safety problems in dark times and locations. So Dang and her team assessed the citywide system and focused on brightening key intersections where safety problems have occurred. The data-driven approach to prioritizing limited dollars helped to justify a significant budget commitment to street lighting as part of the city’s Vision Zero work.

And Dang is working to incorporate safer speeds citywide. In addition to specific project locations on corridors where speeds are dangerously high, she is also working to narrow more travel lanes to 9’5” in order to slow vehicle traffic to a safer level. The city is also adding more crosswalks, aiming for about every 4 blocks, in order to give people walking more safe crossing options and to slow driving speeds for safety.

There is also a focus on expanding the city’s traffic calming program, with a focus on adding speed humps and traffic circles, which Dang cites as particularly effective in slowing down drivers and increasing safety on the streets.

As is the case in many places, West Palm Beach’s transportation safety team recognized that the local Fire Department personnel had concerns about traffic calming and other design changes and policy changes associated with Vision Zero possibly delaying response times.

Recognizing the opportunity to collaborate on shared safety goals, Dang joined Fire Dept. officials for a ride-along on a fire engine to experience issues first-hand and to better understand concerns and possible solutions. The time spent was constructive, yielding agreement that the traffic calming and road safety measures were not, in fact, delaying emergency response. The ride-along revealed other problematic issues that could be addressed together, including potholes, placement of signs, and tree branches that could slow response time. As a result of the collaboration, the Transportation Dept. set up a database to better track street closure issues and established a road closure committee with the Fire Dept. that meets every two weeks to discuss issues and assess concerns and solutions. Dang cites this as a significant breakthrough in productive collaboration between key city agencies working toward public safety. 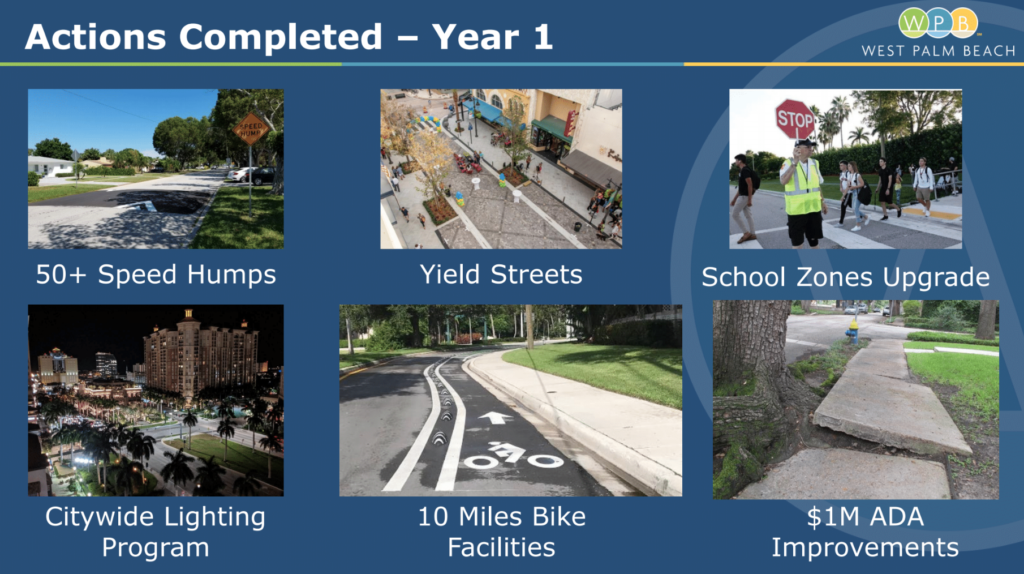 Fortunately, the results have been promising. West Palm Beach has experienced a decrease in traffic deaths, from 6 in 2018 to 4 in 2019, as well as an overall decrease in serious traffic crashes. Clearly, the program is still young and the results only cover a year, but leaders are encouraged to see safety trending in the right direction.

Previous StoryU.S. Fails to Engage on Global Road Safety Commitments
Next StoryTalking with Jill Locantore of the Denver Streets Partnership