The doctors came over to us and had to explain they had been working on Ally
for half an hour and had to stop. They were pumping her heart and it wouldn’t start…
We’re not the same people. What’s so difficult is that this was preventable.
– Mother of Allison Liao, 3, struck by a car and killed while crossing in a crosswalk

Every two hours in New York City, a loved one is killed or injured in a traffic crash. Even as safety has improved dramatically over the past two decades, the statistics are staggering: 4,000 men and women are injured and 250 are killed every single year.

Perhaps more than anywhere else, in the bustle of the Big Apple, streets are viewed by many as organized chaos, where all road users’ battle for space and human dignity is secondary to getting to one’s destination as quickly as possible.

But a new effort is unifying diverse stakeholders and making safety an urgent priority on our city streets. Vision Zero is changing the assumption that traffic fatalities are inevitable, and making the legacy of children like Ally Liao a city where streets are safe for everyone.

Yes, improving safety has been high on the radar of city officials and transportation planners for years — in fact, in 2008, the city pledged to half traffic fatalities by 2030. But, in 2011, a transformative concept began to gain traction. In a report published by Transportation Alternatives and the Drum Major Institute, advocates called for something far more bold: “We recommend that the city make safety the explicit goal or the primary outcome of the street transportation system [and] should adopt as its guiding “vision” a commitment that no one should be killed or seriously injured on New York City streets.

The name and course to that new reality: Vision Zero. Conceived in Sweden in 1997, Vision Zero represented a paradigm shift in two ways: Asserting that traffic deaths and severe injuries are preventable and setting the goal of eliminating both in a specific time frame. In changing cultural perceptions and mobilizing multidisciplinary stakeholders to take responsibility for traffic safety Vision Zero was imported to other countries and cities — and showed results.

Transportation Alternatives took the lead in pushing the concept forward in New York City, organizing events, research and campaigns that highlighted the key factors in New York City’s crashes, including speeding, unsafe street design and lack of enforcement of traffic violations. In February 2014, a group of crash survivors and family members of New Yorkers killed in traffic united to form Families for Safe Streets — sharing with policymakers and the public the deep tragedy and needless suffering that could be prevented with proven interventions.

That same year, Mayoral candidate Bill de Blasio made Vision Zero central to his platform and, once elected, made traffic safety a top priority. In an Action Plan released just weeks after taking office, the administration stated definitively that “No level of fatality on City streets is inevitable or acceptable” and committed to eliminate all traffic deaths by 2024. The city also spelled out why Vision Zero could be a game-changer in one of the world’s most iconic cities: 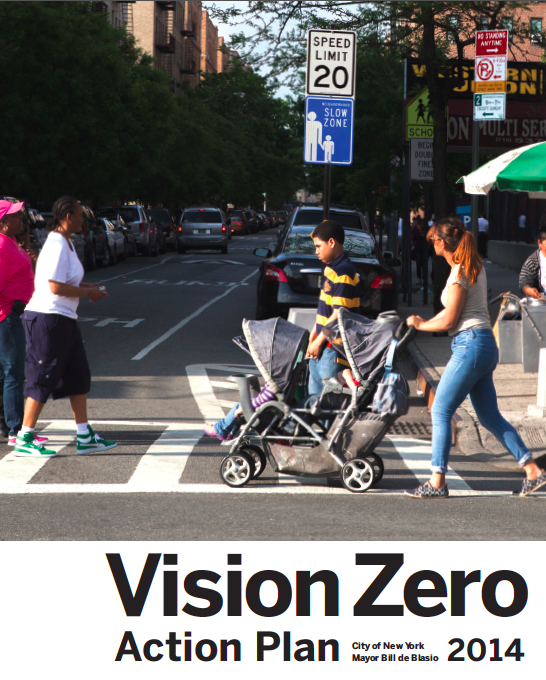 1) The success of Vision Zero policies comes from their multi-faceted approach— bringing together government, advocacy and private sector actors, as well as fully engaging the public to become part of the solution.

4) Vision Zero allows us—government agencies, industry groups, key transportation stakeholders and the public alike—to understand traffic crashes as the result of a series of actions that can be changed or prevented through enforcement, education and design.

“Traffic violence has been a silent epidemic in NYC for decades,” said Caroline Samponaro, Deputy Director of Transportation Alternatives. “More New Yorkers are killed by cars than murdered by guns. Mayor de Blasio introduced Vision Zero as a mechanism to put a stop to this preventable public health crisis and foster inter-agency collaboration to meet the ambitious goal of zero traffic serious injuries and fatalities by 2024. New York City’s bold leadership on this issue is setting the tone for cities across the United States and around the world.”

The Vision Zero Action Plan included 63 specific initiatives, with significant responsibility and accountability assigned to half-a-dozen city departments. And, true to its title, it sparked major changes in a matter of months. Within the first year…

At the start of 2015, as the city moved into year two, the Mayor’s office reported meaningful progress, announcing that 2014 was the safest year for New York City’s pedestrians since recordkeeping began in 1910, with overall traffic fatalities down 15 percent from 2013 and pedestrian fatalities down 27 percent.

“Last year we lowered our default speed limit and won the right for NYC to have more speed enforcement cameras,” Samponaro said. “Our City Council passed a collection of street safety bills into law, including the Right of Way law. This law makes failure to yield a criminal misdemeanor, acknowledging that this dangerous driver behavior is a top killer and cause of injury and one all drivers must avoid. Not coincidentally, pedestrians deaths were at a record low in 2014. In 2015, Mayor de Blasio introduced a new program in the capital budget: Vision Zero Great Streets. If 2014 was about setting the legal and inter-agency foundation for success, 2015 is about doubling down on street design as a core Vision Zero tool.”

There’s still much work to be done — and Transportation Alternatives and Families for Safe Streets are continuing to push the work forward with a set of recommendations to quicken the pace and maintain the urgency in 2015. Shortly after the one-year anniversary of NYC’s Vision Zero committed, TA released two reports highlighting the need for increased investment in retrofitting unsafe streets and improved enforcement at the NYPD.

“There is tremendous support in neighborhoods across the five boroughs for Vision Zero,” Samponaro said. “New York City is the most pedestrian-dense city in the world and communities are eager to have streets that are safe for kids to walk home from school and where a sense of community is fostered, not broken down by traffic violence. Most notably, in NYC this demand is conveyed daily by Families for Safe Streets: They make clear the reasons we’re working toward Vision Zero and they bring a face to the victims who are no longer here to speak out for themselves. Vision Zero is a policy but it’s also a bold message about what we value most in the Big Apple.”

Representing the powerful impact of working together to shift perceptions of traffic safety, a new video debuted on March 30. Presented by the New York City Taxi and Limousine Commission, NYC DOT, NYPD, Families for Safe Streets and Transportation Alternatives, “Drive Like Your Family Lives Here,” tells the stories and shows the faces of five people — daughters and sons, partners and best friends — who died needlessly.

“It’s our hope that our story, along with the others, will serve as another powerful tool in our effort toward Vision Zero, because no family should needlessly suffer as ours has,” Amy Tam-Liao, of Families for Safe Streets said. “As painful as it was to retell our story, the medium of video may connect with people in a way where words by themselves may sometimes not be enough.”

That hope is shared by the city’s highest officials. “We are putting every tool we have — engineering, enforcement and education — to use in reaching Vision Zero,” Mayor de Blasio said in a recent statement. “This is about more than numbers. Vision Zero means parents can more safely cross the streets with their children, and seniors can walk their neighborhoods more easily. We’re approaching this second year of work with proof these methods work and expanding them to even more neighborhoods.”