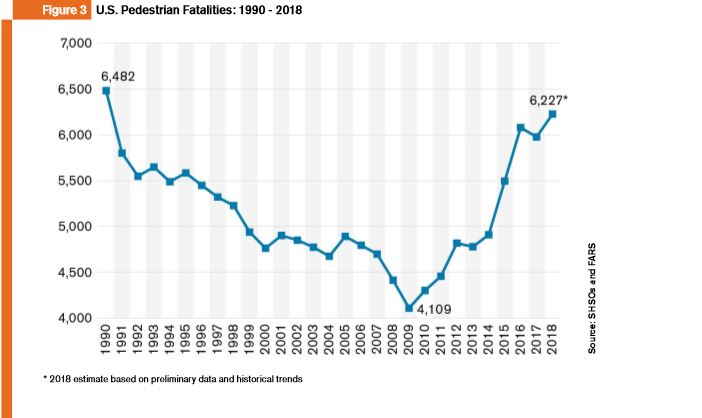 The projected rise of people killed while walking in 2018 – as highlighted in a new report, Pedestrian Traffic Fatalities by State, released by the Governors Highway Safety Association (GHSA) – should sound an alarm on an urgent crisis in the U.S.: the preventable loss of life and severe injuries that occur on our roadways. Between 2008-2017, the number of pedestrian fatalities increased by 35%, a trend GHSA used to predict last year’s pedestrian fatalities (note: 2018 data is not yet available). This number would result in the “largest annual number of pedestrians killed in the U.S.” in nearly 30 years.

While we are right to shine a long-overdue spotlight on this distressing problem, it is also instructive to look at the difference in trends at the national level and within some of the nation’s largest cities, who are acting more aggressively to move beyond the traditional approach to traffic safety. 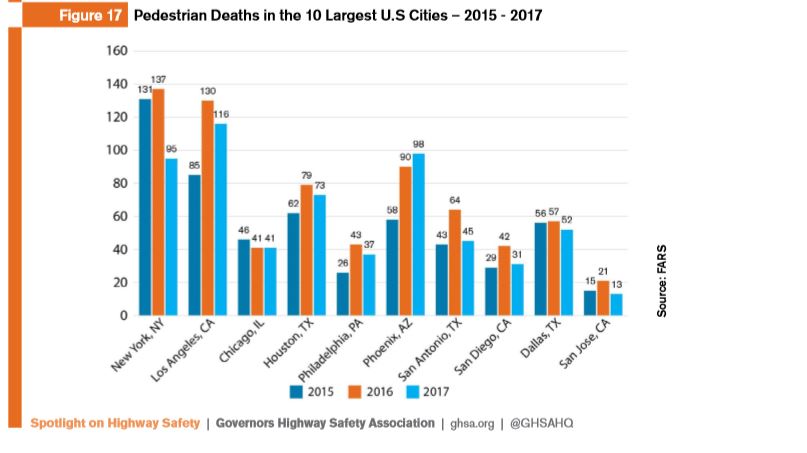 The welcome decrease of 15 percent in pedestrian fatalities in the nation’s 10 largest cities from 2016 to 2017 might be attributable in part to aggressive traffic safety initiatives such as Vision Zero, which has a principal aim of reducing the number of pedestrian and bicyclists fatalities, with the longterm goal of bringing these numbers to zero – GHSA Pedestrian Traffic Fatalities report [/pullquote]

Vision Zero is a systemic, holistic approach to transportation that doesn’t zero in on any one problem but rather calls attention to the most important factors, based on data, that influence traffic safety – from unsafe speeds to dark roadways to vehicle design. These factors have also been highlighted by GHSA:

1) Low-cost, low-tech solutions are fundamental to Vision Zero progress. Talk about new technologies shouldn’t distract us from proven, low-cost, low-tech solutions that can be implemented now while other technologies are being explored (such as autonomous vehicles and speed limiters). In fact, many low-tech strategies, including redesigned roadways, new sidewalks and curb extensions, are effective at reducing unsafe speeds, providing safe access for people walking and reducing traffic collisions. These are not technological improvements that require more study, but rather proven safety measures that exist today and show well-documented benefits. Low-cost solutions, including designing Complete Streets, improving lighting, and reducing speeds can reverse the alarming rates of traffic fatalities today at reasonable costs. There’s no reason to wait.

2) Greater commitment is needed to Vision Zero’s Safe Systems approach of acknowledging human error and planning for systems changes to lessen the severity of inevitable mistakes. For instance, we know that setting lower speed limits, using automated speed enforcement and designing roadways in certain ways are all proven strategies to deter dangerous speeds. So, crashes may still happen, but if they happen at lower speeds, especially on a roadway with a mix of users including people walking and biking, these crashes are more likely to result in a fender bender or a broken ankle….not a death sentence. Another example is around the issue of drunk driving; as long as people can drink and drive, some will. But we know that existing technology, such as breath alcohol ignition interlock devices, effectively discourage this practice. Other countries are adopting this already; why not in the U.S.?

The startling new numbers showing pedestrian deaths on the rise in the U.S. should draw our urgent attention to a long-overlooked crisis. Seeing how progress is possible with Vision Zero’s Safe Systems approach should compel us to act with even greater urgency. Read more here about which actions leaders at the local, state and federal levels can and should take today to stem the tide of tragedies on our roadways.