In Boston, they laid 4,000 yellow roses on the steps of the State House, representing those killed and seriously injured in crashes in Massachusetts in 2020 and 2021.

In St. Paul, they lined candles on the steps of the State Capitol in the shape of “447,” the number of people killed in traffic crashes, so far, this year.

In Texas, they read the names of every person killed in traffic crashes in the past year – a sobering process that took more than 12 hours.

In NYC, they dedicated 1,800 potted trees in honor of the people who died in traffic crashes in the city during the past eight years.

In Bismark, families and friends joined together at the State Capitol and added to a makeshift memorial — photos, shoes, and flowers — in honor of their loved ones lost in crashes. Theirs was a first-time event.

In Washington, D.C, thousands reflected on the toll of traffic violence at a powerful Remembrance Wall in Union Station in the nation’s capital, where people added heartfelt notes and photographs in memory of those lost.

And U.S. Secretary of Transportation, in an unprecedented statement, recognized the “national crisis” on our streets and pledged “urgent action.”

Each of these events commemorating World Day of Remembrance for Road Traffic Victims (November 21, 2021) — and dozens more across the nation (see images below) — tell stories of loss and suffering.

In honor of World Day of Remembrance, the MA #VisionZero Coalition laid over 4,000 yellow blossoms on the steps of the State House – 1 for each life impacted by or lost to a serious or fatal traffic crash in #MA in 2020 + 2021 #WDoR2021 pic.twitter.com/aq8zRr7x7L

At least three other communities in Massachusetts — Brookline, Medford and Springfield — had World Day of Remembrance gatherings.

Mayor Ezzy Ashcraft speaking to the urgent problems of traffic safety on the steps of Alameda City Council #WDoR2021 pic.twitter.com/6N5UCMbBWQ

Indianapolis bike/pedestrian safety advocates having a 7-minute moment of silence for the 7 cyclists, by @BikeIndpls count, who’ve been killed by motorists in the city since July. This candlelight vigil is in honor of #WorldRemembranceDay. pic.twitter.com/SbEnuDOidP

Tonight we lit 378 candles, one for each person killed in a preventable traffic crash since Denver committed to Vision Zero on Feb 17, 2016. I am heartbroken and exhausted. And I am hopeful, because we can prevent these tragedies from happening, if we choose to. pic.twitter.com/4k8FmlFbY9

Leaders Recognize Crisis on our Streets

This year, more influential decisionmakers than ever recognized the dire need for action and joined the calls for change on this World Day of Remembrance. Most notably, U.S. Transportation Secretary Pete Buttigieg committed to “urgent action” to prioritize safe mobility.

“A single preventable death is a tragedy. Tens of thousands of them a year is a national crisis – one that demands not just our remembrance, but our urgent action,” said Buttigieg, in recorded remarks released on annual World Day of Remembrance, which honors the 1.3 million people killed in preventable crashes worldwide each year – including more than 42,000 people in the U.S. last year.

“Just about all of us can think of the names of people we care about lost in a crash,” said Buttigieg. “And yet too often these deaths are described as if they’re somehow inevitable, as if it was just the cost of living in the 21st century, when the truth is these deaths can be prevented.”

In a growing movement for change, people in more than 35 communities – ranging from Washington, D.C. to Wichita, KS, and Wheaton MD to Alameda, CA – organized memorials, vigils and rallies yesterday to mourn those killed and injured in crashes and to call on leaders to more aggressively use proven safety solutions to ensure safe mobility for everyone in this nation.

The demands for action are particularly poignant this year. In the first half of 2021, 18.4% more people died in traffic crashes compared to 2020, according to the U.S. Dept. of Transportation. Last year, 42,060 people died on the U.S. roads, a 24% spike over the prior year’s rate of traffic deaths – the highest rate increase in 96 years – according to the National Safety Council.

In a compelling statement, Jennifer Homendy, Chair of the National Transportation Safety Board, called for more than remembrances for those lost in preventable traffic crashes. She called for actions, specifically, including traffic calming measures, lower speeds, requiring technologies to protect people walking and biking, investing in public transit, and more.

“But most of all these victims should be remembered as what they were: flesh & blood. Human. Vulnerable,” Homendy said. “Don’t think of numbers, think of people. Put them at the center of every decision about our road system. That’s the paradigm shift that we need.”

Participation across the nation from other high-profile decisionmakers showed the growing influence of the Vision Zero movement and the recognition that we can and must do more to prevent traffic violence. Other participants included NY Senator and Majority Leader Charles Schumer, newly elected Boston Mayor Michelle Wu, Cleveland Mayor-Elect Justin Bibb, NYC Mayor-Elect Eric Adams, and others.

Today is World Day of Remembrance for victims of traffic crashes.

On World Day of Remembrance, we recognize victims lost to preventable traffic accidents and recommit to building safer streets in Cleveland. We can’t stop until we achieve #VisionZero pic.twitter.com/G26fuhbvqk

Today on #WDoR2021, we pay tribute to those who have been killed by the epidemic of traffic violence here in NYC and throughout the world.

As we contend with a surge in traffic fatalities, let us recommit ourselves to making our streets safer for all. pic.twitter.com/YqLTNcaCQL

After a record-setting turnout for World Day of Remembrance and a growing recognition of the urgency — and ability to prevent — this crisis, what’s next?

Advocates for safety will continue the push for a Congressional Resolution supporting the first-ever, national Zero Traffic Deaths goal and plan. They will work to ensure the forthcoming U.S. Department of Transportation’s national safety plan is ambitious and acted-upon. And they will continue to work at local and state levels to change the status quo of an everyday transportation system that is a leading cause of death.

A few of the actions that leaders could and should take now include:

➔ Shifting funding and policies at local, state, and federal levels to prioritize safety over speed; encourage safe walking, biking and transit; and focus on locations and communities that are high-injury, and often, underserved areas.

“It is inexcusable that we have the tools and know-how to keep people safe but our elected leaders are neglecting to do so,” says Amy Cohen, co-founder of Families for Safe Streets, whose 12-year-old son Sammy was hit and killed in NYC. “We know that strategies such as lowering speeds and re-designing streets and leveraging proven safety technologies will prevent serious crashes. What we are demanding now is political will to start prioritizing safety above speed.”

“This stepped-up activism and growing recognition from political leaders across the country should be a turning point for the nation,” said Leah Shahum, director of the Vision Zero Network. “Now we recognize that we can and must stem the tens of thousands of traffic deaths and millions more injuries each year. With an influx of transportation funding from the new federal bill, let’s commit to safe mobility above all else.”

Enough is enough. Remembering all those who have been killed and injured because of traffic violence on World Day of Remembrance for the Victims of Traffic Violence #WDoR2021 #streetsareforeveryone pic.twitter.com/BlXpAcsx4n

Wheaton, MD held its first ever World Day of Remembrance that gathered around 60 people including 4 families who delivered heart wrenching stories of loss. The Chair of the National Transportation Board (NTSB) Jennifer Homendy said a few words, and several State delegates, County Councilmembers, and one candidate for Governor read the names of the 85 road traffic victims in Montgomery County in 2020-2021.

Commemorating World Day of Remembrance for Road Traffic Victims. Hearing from victim family members about the precious lives we lost. Reading the names aloud & considering the magnitude of the devastation. We must reach #VisionZero. TY @actfortransit @WABADC #WDoR2021 pic.twitter.com/CbOcLQmkQN

Tonight loved ones are coming together to remember family members who have died in pedestrian crashes. @walkbikenash is calling for more sidewalks, crosswalks and street lights. pic.twitter.com/9zgToaSaNB

“Today we stand in front of 1,800 pots to represent a painful reminder of the past 8 years. They also represent our hope for the future.”

…and some local events around NYC

Most of all, our gratitude & thoughts go to @BayAreaFSS members & others suffering in the aftermath of crashes. pic.twitter.com/9l50jUgHAB

In St. Paul, MN, 447 candles were lit up in memory of people who died on the state roads so far. 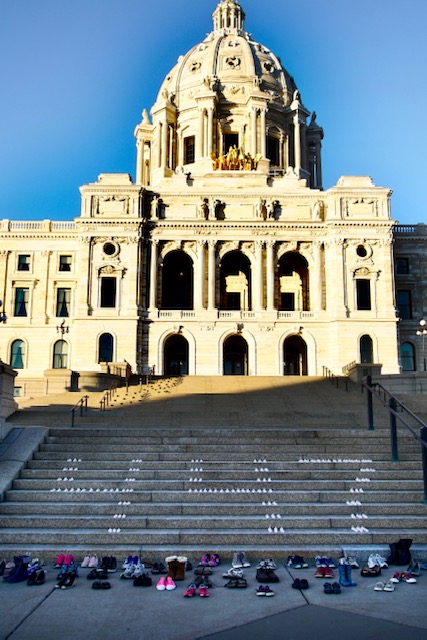 Helped @ffxsafestreets plant signs for #WDoR2021 honoring those who lost there lives trying to cross our streets this year. 😢 pic.twitter.com/4g94asHsLY

This morning I lent my support to the @HillsboroughMPO Vision Zero Morning of Remembrance off of Bruce B. Downs. Many commemorated those who lost their life this year in traffic incidents.

May those missing someone special find peace and may they become strong in broken places. pic.twitter.com/ayBjbFHtsG

Today is World Day of Remembrance for Road Traffic Victims. The Remembrance Wall is up in DC's Union Station until 5pm today. As we honor and remember, we call on our local, regional, & federal leaders to act NOW to end this preventable crisis. #WDOR2021 #ZeroTrafficDeaths pic.twitter.com/HJaaO90nW3

Went to the #WorldDayofRemembrance memorial put on by @SafeStreetsJC and @bikejc in JC this evening. The thought I couldn't shake – I hate how good we've gotten at building memorials to victims of traffic violence. We have too much practice. pic.twitter.com/qLRQDuReCr

Some of the communities prepared powerful videos and video streams for WDoR.

FYI – we're still reading the list of all the people killed in the Texas transportation system in the last year. We started at 9am and it looks like we'll finish around 9pm.

In case you missed it, here is the special episode of SAFE tv that aired on @cantvchicago on Monday night to mark World Day of Remembrance for Road Traffic Victims#WDoR2021 @cantvchicago@ChicagoSafe
#VisionZero https://t.co/Q1ls2Mtit5

Tonight, we recognized @WDRemembrance for Road Traffic Victims. The 50 names we read tonight are a small fraction of the nearly 400 lives that have been lost in Brevard County, due to traffic crashes, over the last five years, represented here as the light left behind. #WDoR2021 pic.twitter.com/iIYtK1fLhw

… and here are some personal stories:

On this #WDoR2021 Remember my son Seth taken from us much too soon by a speeding reckless driver making a left turn. Seth didn’t have to die if our roads were made safer, if the driver that killed my son was taken off the road if the laws were better. #ZeroTrafficDeaths pic.twitter.com/67LoSFWFqw

Glad we had a chance to share our dad's story at Union Station with @DCSafeStreets for #WDoR2021. Killed walking across a DC street by a distracted MD driver in 2008. Not even a ticket. Far too many stolen lives! pic.twitter.com/zal7x1VMDC

When Allie was struck & killed, our lives changed. Forever. We’ll never sleep w her nestled between us again. Or watch a sunset while eating s’mores. She deserved so much more. We all deserve safe streets & leaders with the political will to make it happen. #WDoR2021 #VisionZero pic.twitter.com/bcAlAFt6yp

Thank you to all of the organizers of World Day of Remembrance for Road Traffic Victims around the nation and the world. We stand with you in honoring those injured and lost. And we are ready to redouble our efforts to make change and ensure safe mobility for all.