The very public, stepped-up federal policy commitments to roadway safety – announced by the U.S. Department of Transportation (U.S. DOT) in late January 2022 – are unprecedented on many levels. One is this: for the first time, our nation’s transportation leaders recognize and embrace the power of ZERO. 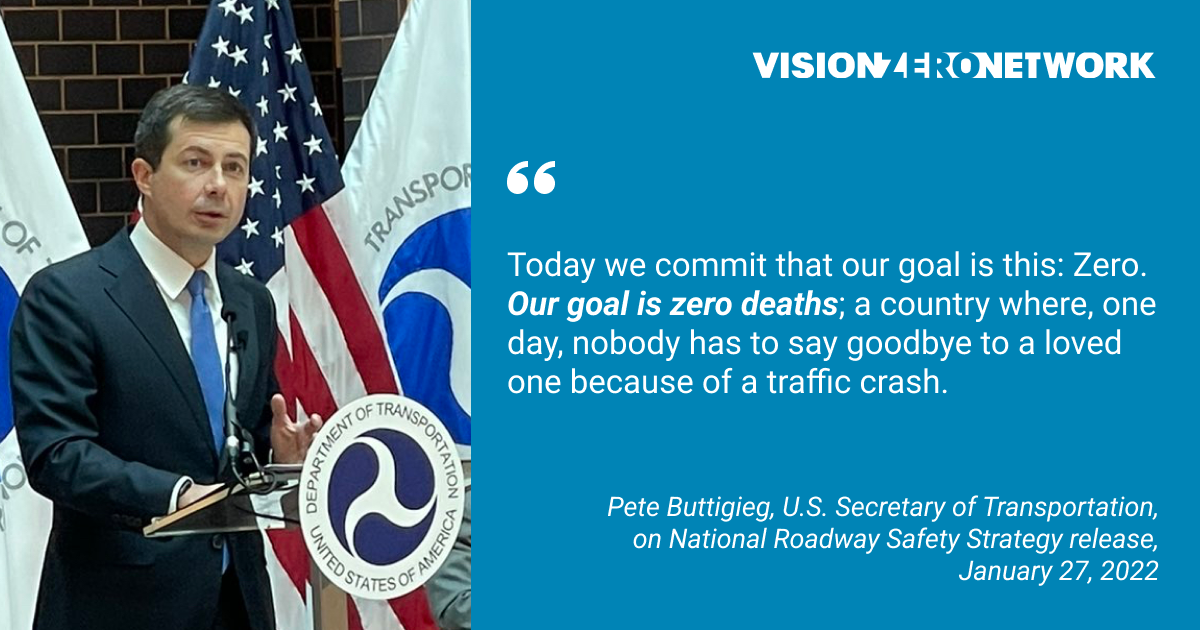 “I understand the scale of the challenge and the ambition represented by that goal,” said U.S. Transportation Secretary Pete Buttigieg, in releasing the first-ever National Roadway Safety Strategy. “And I understand that we may not get there during my tenure as Secretary. But the decision – to commit to that goal in a serious way, at a national level – changes the way cities and towns design roads, it changes the ways companies build cars, and it changes the way people drive them. Jurisdictions and organizations that have adopted that goal have used it to save lives, and it is now our intention to do the same as a matter of national policy.”

Zero matters. To get there, we need a more human-centric approach to designing, operating, and maintaining our everyday transportation system. The goal is about keeping people safe.

The very big, sometimes-daunting reality of more than 42,000 traffic deaths and millions more injuries each year demands bold change. And change starts with a clear, common goal to set plans, policies and practices.

“Creating a big, bold goal and vision has a catalyzing effect. It challenges us to do things differently,” Polly Trottenberg, Deputy Secretary of U.S. DOT, shared as part of the agency’s release of the National Strategy. She continued that this has a “tremendous effect on bringing people together for a shared goal.”

When it comes to roadway safety, we too often lose sight of what’s most important. As we cite statistics, analyze “seconds of delay” to car travel, estimate costs, and debate policies at City Hall or State Assemblies, people are dying in preventable crashes. The reality is: we know what works to prevent – or lessen the severity of – most serious crashes (more here and here).

When we’ve set our collective minds to important goals, we’ve achieved them – or, at least, made meaningful progress.

As Secretary Buttigieg shared in January 2021 in announcing the goal of zero roadway fatalities:

“We cannot and must not accept that these fatalities are somehow an inevitable part of life in America.

Think about the fact when someone is about to get in a car and drive somewhere, we might say ‘drive safe.’ We don’t do that with most other routines, everyday activities in civilian life – partly because we as a society have acted to make sure that more and more everyday activities are certain to be safe. When someone is headed to a restaurant we don’t say ‘eat safe’ today, perhaps because food is far safer – thanks to the food safety laws of the early 20th century.

We’ve acted to make American workplaces safer – realizing that on-the-job deaths are unacceptable. Of course, there is more work to do in that area, but your workplace is one-fifth as likely to be deadly today as it was before OSHA took effect 50 years ago. When it comes to roadway deaths, we have a crisis that’s urgent, unacceptable – and preventable.”

Bottom line, if the goal is not safe mobility for everyone, then who are the people we’re willing to sacrifice? Certainly, none of us is willing to volunteer our loved ones. If Zero is the goal for our own families’ and friends’ safety, shouldn’t it be so for our policymakers and everyone who touches the transportation system?

Video “There’s No One Someone Won’t Miss”, one minute long

Of course, saying the words to prioritize safe mobility for all and actually taking steps to change the status quo are different things. We urge national leaders and U.S. DOT to live up to their bold promise to move past business-as-usual. And, because so many areas of responsibility and power for change lie beyond the U.S. DOT’s direct reach, we call on leaders in local communities, regional governments, and state agencies – as well as in the private sector, hello automakers! – to step up to the challenge that has been laid out.

“So we’re calling on all of America, every level of government, every insurance company, every motor carrier, every auto manufacturer, to embrace and commit to the specific actions for partners that we are releasing as a companion to the National Roadway Safety Strategy,” Secretary Buttigieg said.

Lives are on the line. And we have the power to prioritize safety.