Dylan Mitchell was a 21-year-old star athlete in San Francisco who was starting a career as an electrician, following in the footsteps of four generations of Mitchells. But on May 23, 2013, Dylan’s career and future were tragically cut short when he was struck and killed by a garbage truck driver while he commuted to work on his bicycle.

On Sunday, November 19, 2017 — International World Day of Remembrance for Road Traffic Victims — Dylan’s mother Julie will join with other parents, family members, and friends across the globe who have lost loved ones to say “Enough is enough” and demand change to curb one of the leading preventable causes of death. 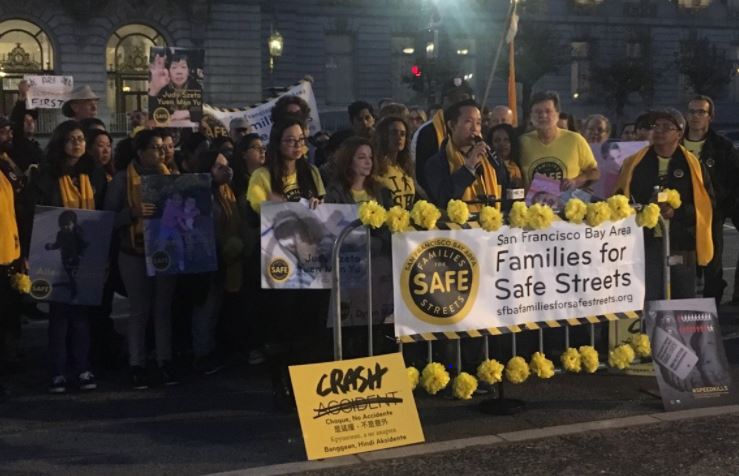 Fatal crashes like Dylan’s took the lives of more than 40,000 people last year in the U.S., one of the deadliest years on record in a decade, and more than 1.2 million people across the globe last year. In the U.S., this scale of preventable loss of life is on par with epidemics such as gun deaths and opioid deaths, which receive far greater attention and urgency than traffic losses.

But complacency around traffic deaths is starting to change, as part of the fast-growing commitment amongst U.S. communities to the goal of Vision Zero – eliminating traffic fatalities and severe injuries among all road users. Vision Zero recognizes that traffic crashes are not just “accidents,” but rather largely predictable incidents that we can prevent with safer roadway design, policies, and other proven strategies that prioritize the safe mobility of people over speed.

Focus on Vision Zero, Led by Families for Safe Streets

As Families for Safe Streets chapters grow, so do the number of events and participants organizing on the World Day of Remembrance. This year, at least 13 cities will host commemorative events across the country. While the events are unique to each community, the common threads of grief, pain, and a rally for change are carried through each and illustrated through the symbolic color of yellow.

Events planned for November 19th include:

Advocacy for Vision Zero in these communities is making an impact. In NYC, Families for Safe Streets members’ advocacy for Vision Zero was critical in advancing life-saving policies and safety improvements, including re-designing streets for safer conditions, reducing the speed limit citywide, and adding safety cameras to encourage safe speeds – which have successfully reduced the number of traffic deaths in New York by 23% in the last three years.

“World Day of Remembrance illuminates the immense and unjust impact that severe traffic crashes have on our communities and remind us that real people — our children, brothers, sisters, wives, husbands, and other loved ones — are all lives lost behind the statistics,” says Kathleen Ferrier, Policy & Communications Director of the Vision Zero Network, a nonprofit project working with nearly 30 U.S. cities who have committed to Vision Zero goals and principles.

Community voices underscore the message behind Vision Zero that traffic deaths are preventable and that we must hold our elected leaders and system designers accountable to prioritize safety over speed. Following are some of the individuals who are sharing their stories on this World Day of Remembrance:

“The deaths aren’t numbers, they are our children, our friends, and our neighbors. I want families to feel and know that their loved ones are safe walking to school, cycling to work, or just coming home”

Mike Myers, Member of Central Texas Families for Safe Streets who lost his 18-year old daughter Elana in a traffic crash when she was driving home from college

“We want to stand together with other families to demonstrate that our loved ones are more than just statistics, and that their deaths should not be considered an acceptable part of our automobile-focused society and streets. Protecting human lives matters, and “saving lives” isn’t just a slogan, it has intense personal impact on tens of thousands of families across the United States” 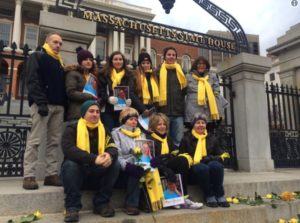 “Unless you have lost a loved one in the way that we have, you will not know the emotional turmoil that we have experienced and continue to experience every single day. We believe that attitudes, behaviors, street design, and laws need to change, and we need people to realize that every person plays an important part in keeping our streets safe”

Beverly Shelton, Member of Southern California Families for Safe Streets, who lost her 5-year old grandson Zach was hit by a car while crossing the street

“My son Arman’s life was robbed from him, just as he was just getting started. My son’s death cannot be the price we pay for driving; no loss of life is acceptable. Together, we must change the culture of acceptance around traffic violence because crashes are NOT accidents; they are predictable and preventable!”

“I have lived, worked and played in Austin since 1998. Until now I just took things for granted, I have always felt safe until June 7, 2016 when our son lost his life to an unsafe driver’s decision. Our family would never ever want someone to go through the pain, loss, and expense we have. Moving forward, if our family is going to live here we are going to be involved. What better way to help our community be safe and held accountable than being involved with Families for Safe Streets.”

Anna Bauereis, Member of Central Texas Families for Safe Streets, who lost her 14-year old son Alexei as he was walking with his bike to cross the street

Learn more about the Vision Zero Network’s efforts to advance safe mobility for all at www.visionzeronetwork.org

Previous StoryCreate Meaningful Vision Zero Commitments through an Action Plan
Next StoryYes You CAN Manage Speeds in your Community: Portland Shows us How